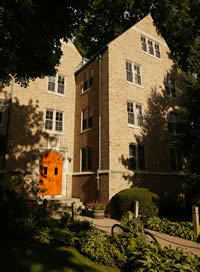 They call themselves: Zahmbies, although the hall’s sports teams are called Rabid Bats.

Named for: Father John Augustine Zahm, CSC. After graduating in 1871, Zahm remained at Notre Dame to teach chemistry, physics and natural science. He was regarded as a captivating lecturer and brilliant scholar and rose to director of the science department in 1875 and to vice president of the University in 1884. Zahm designed the new science facility that opened in 1884; the building now houses the LaFortune Student Center. He left Notre Dame in the late 1890s to travel to Rome and received an honorary Ph.D. from Pope Leo XIII. But his interest in evolution, which he saw as compatible with religious faith, earned him critics. His book Evolution and Dogma narrowly escaped being banned by the church. Later in life Zahm devoted much of his time to travel and in 1913 joined former President Theodore Roosevelt, a close friend, on an expedition to South America.

Distinguishing features: A huge red “Z” hangs from one of the dorm’s third-floor windows and illuminates the North Quad nightly. Since 2002 the dorm has also hung an enormous banner reading “Here Come the Irish” across its entire eastern facade on home football Saturdays. The dorm’s parlor is named for Conor Murphy, a former resident who died of leukemia in 2001, his junior year.

History made there: Zahm housed naval officers during World War II while they trained at the University. It was the second dorm built on the North Quad.

Lore: Zahm’s reputation as the dorm with the most raucous students began in the days when upperclassmen with the highest grade-point averages got first pick of dorms. Zahm had the least desirable campus location, next to the freshman residence halls, so the least-accomplished students tended to end up there. Current residents affectionately refer to their hall as Zahm House, a la Animal House, and signs pointing in the direction of the hall during freshman orientation read, “Zahm Hall, the best 6 years of your life.” The hall’s mascot is a stuffed moose head named Ignats that hangs in the basement lounge. Four residents acquired it in 1979 from a ski lodge that was going out of business. They brought it back to campus and began taking it to men’s basketball games. Legend has it that every time the moose head attended, the Irish won. One day an usher refused it admittance and the team lost. Superstitious coach Digger Phelps found out and instructed the ushers never to bar its entry again.

Traditions: Every winter Zahm hosts a Decade Dance in which each section dresses in costumes from a different decade. Residents also participate in the biannual Bun Run, in which male students streak through LaFortune and the library during finals week with only their faces covered. Residents volunteer with a program called There Are Children Here that enables youth from troubled homes to escape from their domestic situations by going to a camp outside of town or, in the case of Zahm, coming to campus to spend time with college students.