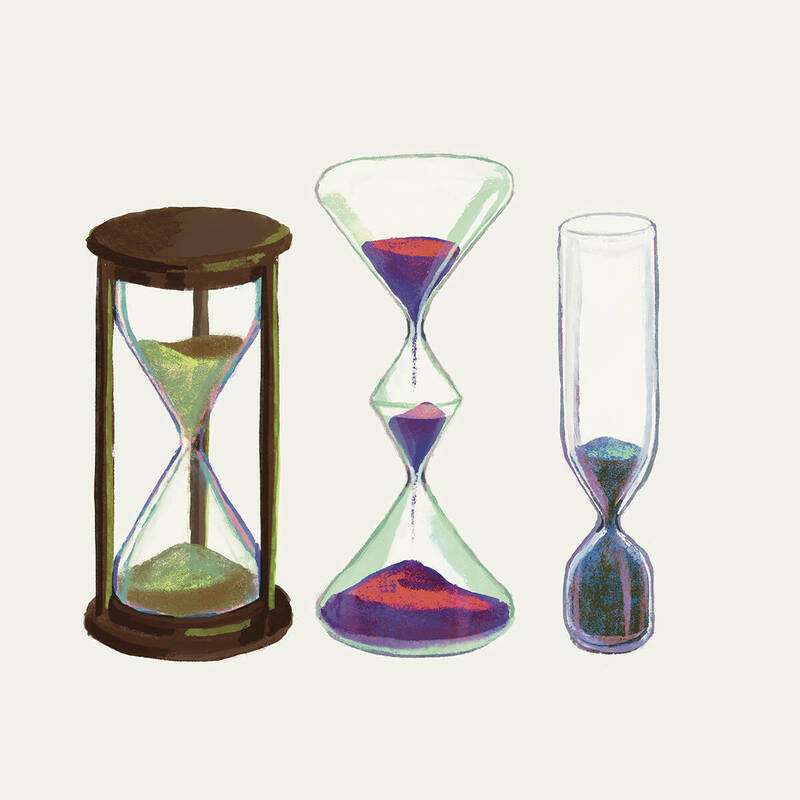 My weekday alarm is set for 6:43. I leave the house at 7:18 and arrive at work by 7:43, with two minutes to spare before my workday begins. There are daily variables — rinsing out a used milk carton, returning inside for an umbrella — but timewise they fall within a predictable range.

Mr. Davis, my high school algebra II teacher, was attuned to variables. He used to boast that he arrived at school a minute before he left home. He lived in the neighborhood abutting school property; his commute was a walk across the parking lot. The school clock ran five minutes slow, allowing for his time travel and general amusement.

Just as the classroom clock worked to Mr. Davis’s advantage, my workplace clock serves me. In my case, the clock is five minutes fast. I work in an outpatient clinic as an occupational therapist, and I see patients on an hourly basis. The clock’s time prompts me to finish visits in a timely manner, granting me a minute or two to spare in between appointments.

My outpatient job is new and significantly busier than my previous position in the hospital. When I mentioned that to a friend recently, she said, by way of condolence, “At least your day goes by quickly.” I understood the sentiment but questioned the premise: Is it really a good thing that our days go by quickly? Similarly, I wince at the expression “killing time.” I acknowledge the discomfort of boredom but dislike the implication of violence towards the metric of our existence.

Many cultural norms are related to time. I once attended a Brazilian wedding in which the bride and groom arrived an hour after the ceremony was scheduled to begin. Sometimes these cultural differences seem to exist even within one household. My housemate, a dear friend, has a different conception of time from mine. If we are planning an activity together and she is in the midst of something, she might ask for a few minutes to finish up. When someone says “a couple,” or “a few,” my instinct is to make a swift calculation — add two or three minutes and reset the timer — but I have come to see such terms as nebulous. “A few minutes” might mean however long it takes to finish responding to emails, which in reality might take 11 or 13. Speaking in indefinite terms about time is not my first language, so receiving these terms loosely requires translation.

My brother Austin once expressed puzzlement at people’s flexible concepts of time. It would be understandable, he said, if we had no reliable device by which to gauge it. But today when most people have within arm’s reach apparatuses that not only tell time but are perfectly synchronized, I second his perplexity. Occasionally when I realize I have not looked at a clock for a while, I will guess the hour and minute before checking for accuracy, as if recalibrating my internal clock.

When my brothers and I were younger, my father would encourage us to make a list of things we didn’t have time for during the school year that we wanted to do in the summer. I think it was a preemptive strike against complaints of summer boredom. But I also think it was wisdom coming from a man whose weekday hours were forever conscripted by the needs of others, and whose summer break was but one precious week long.

Dad has been transitioning into retirement over the past year, and he often notes that the years with the two highest mortality rates for males are those of birth and retirement. I perceive some angst underlying his repetition of this factoid as he ponders his newfound time. While his anticipation of full retirement may not be angst-free, it is nuanced. Soon after he made his announcement, a friend offered him a part-time teaching position. He declined, indicating his desire for some extended time off.

We each experience time differently, and our sense of it depends on what we are doing. I delight in activities that muffle the loud tick of my internal clock. My wish for my father in retirement is that he can immerse himself in some of these activities. If he struggles to think of what these might be, all I will say is that after 40 years, he should have written up a pretty long list.