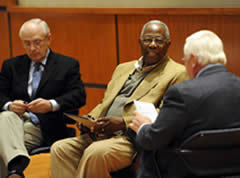 When No. 715 sailed over the left-field wall into the Atlanta Braves’ bullpen that night in April 1974, shifting the title of Major League Baseball’s all-time home run king from George Herman Ruth to Henry Louis Aaron, broadcaster Vin Scully noted the “tremendous strain and relief” on the “poker face” that “Hammerin’ Hank” had kept through the offseason while waiting to break that most golden of sports records.

On the Jordan Auditorium stage at the Mendoza College of Business Wednesday night, Hank Aaron’s poker face was back — if just for a moment. Though he modestly conceded the home run crown in 2007, he continues to hold more career hitting records than any other ballplayer. Still, Aaron sat serenely through the familiar recitation of batting achievements, Gold Gloves and All-Star Game appearances that undoubtedly accounted for the lack of empty seats in the room.

But when Frank Belatti ’69, Aaron’s longtime partner in the restaurant business, began to talk about the thousands of franchises the two men had helped establish, and especially the 500 new business owners they’d supported through a tireless focus on keeping their brands competitive, Aaron’s face lit up with his trademark smile.

For Aaron, it was never about the records. It was about playing and working to his full potential — and helping others do the same.

Over the next hour Aaron and Belatti talked entrepreneurship and baseball with adjunct instructor Mike Vogel ’65, entrepreneur-in-residence at Mendoza’s Gigot Center for Entrepreneurial Studies. Vogel asked first about Aaron’s charity, the Chasing the Dream Foundation, which since 1994 has provided hundreds of grants to kids ages 9 to 12 to pursue their gifts in music, art, writing, dance and sports. Aaron began to speak until, a few seconds into his answer, he realized his microphone wasn’t on. He stopped, and his smile widened. Then the 77-year-old, who had grown up poor with seven brothers and sisters in Mobile, Alabama, and who still considers Jackie Robinson his hero — “no question” — talked about his delight in providing opportunities for others not born into privilege.

Questions from Vogel and students in the audience elicited the former slugger’s views on changes in sports, the role of money in the game and the good and bad sides of ambition.

Aaron advised caution with the notion of athletes as role models, saying that job should properly fall to mothers and fathers and other important people in a young person’s life. And he spoke from experience about the value of honesty and hard work. “There is no shortcut in life,” he said. “If you think there is, you’re going to get yourself in some serious trouble.”

Aaron got his best laugh out of the evening when a student invited him out of retirement to play designated hitter on his Wiffle ball team. He graciously declined. “I haven’t picked up a bat in 20 years,” he said.

The visit, easily among the most memorable in a semester that has brought four governors and other notables to campus, was not Aaron’s first. Lest we all forget, Aaron received an honorary Notre Dame degree during the 2005 commencement ceremonies. “I know exactly where that degree is right now,” the legend said with a chuckle. “No one can get to it but me. It is under lock and key.”