Despite those summer nights when I wake to the searing of macadam, the tires of rehabilitated junkers skidding or spinning, months can pass without my noticing in daylight any of the memorials along the narrow roads near my home, each of the highway names ending with Hollow or Hill. I am surprised when something attracts my attention to one of the crosses. I might stop to lower my driver’s side window and look and listen because a rangy cur has paused from a cool and sunny jog to lift a hind leg, making a canine prayer as the coltsfoot blooms in a landscape still piebald with snow.

The crosses are homemade and white like most others in rural America, each one of thousands marking where someone, usually a boy or young man, died when a rusty car or rattly pickup met a bole or rolled and caught fire. Newly painted or washed, they are brilliant under a cerulean sky, although only when the acoustics are perfect do they seem to whisper an old story or complain laconically about dogs.

They never become banal and officious like those that hector from high spires. They never shout to be heard over the sound of the enormous flag that flies above a small town near my home, adorning a pole that according to local pride is the tallest in the Eastern United States, the red and white and blue cloth snapping and crackling like a windblown conflagration in the clouds. They stay in their lowly place as if they have all the time in the world. They chill in snowdrifts and fade in the presence of wildflowers and point to migrating flocks and glisten with dog urine, here on this pierced earth where you might occasionally detect in the susurrus of seasons a story of love and loss.

A few miles into my trip, I stopped to buy gas on an Indian reservation — a forested mountainside, the weedy tip of Cuba Lake, several cottages and a single Seneca Nation of Indians flag — and soon was off the tiny reservation and passing American flags of homes that ringed the rest of the lake like excessive eyeliner, then farmhouses in a long glacial valley and eventually house trailers wedged between abrupt hillsides and flexuous back roads. Flags and flowers made the cemeteries almost pretty on that Memorial Day weekend.

The living were happily greasing their hands at fundraiser chicken barbecues in the eye-blink towns, fingering merchandise at yard sales, buying jam and bread at Amish stands, drinking cold beer on porches, ambling and chatting on uneven sidewalks. It had been a long winter. Even the hard-working woman who operated the full-service pump back at the gas station seemed thankful to be outside in the warmth, despite the fumes. I drove with my window down and left forearm dangling in the sunshine and wind and against the hot sheet metal of the door — on my way to the Most Holy Family Monastery in Fillmore, New York, which the Southern Poverty Law Center, a national civil rights organization, lists as a hate group.

The Most Holy Family Monastery is overseen by siblings Frederick and Robert Dimond, who go by the names Brother Michael and Brother Peter and consider themselves to be Benedictines — although the institutional Roman Catholic Church does not — and among the few true worshippers of Jesus Christ.

For people who think of themselves as monks, the Dimonds have little apparent liking for the humble harmony of chant, seeming to favor scratchy old tunes, refrains of which could be heard decades or centuries ago — in the Northern Irish sermons of Free Presbyterian minister Ian Paisley, the American radio broadcasts of Catholic priest Charles Coughlin, and in the Spanish decrees of Grand Inquisitor Tomas de Torquemada.

The disquisitions and philippics on the monastery website “expose” or “reveal” that each of the last several popes has been actually a demonic “anti-pope”; Islam is “false religion”; Protestants will sizzle in hell; illuminati and freemasons are taking over the Vatican; and Jews are taking over whatever they can. Although the fantasies of the brothers are far from original, I hoped foolishly for an enlightening answer to an old, sun-blanched question: Why are some people inspired to loath in the name of the Jewish speaker of the Beatitudes? But the Dimonds never responded to my phone and email messages.

Around the monastery, which is located 40 miles from my home and well off a gravel road, the cropland was verdant with timothy and red clover or stubbled with corn stalks left from the autumn harvest, while in the woodlots the wild leeks were jaundiced and shriveling, their season ending in the increasingly deep shade of sugar maples. Two small, plain residences, several outbuildings and a large wooden cross comprised most of the compound, and other than mine I saw no vehicles or activity. The grass in the lawn was as high as the timothy in the fields. A residence window was open, but no one answered my knocking at doors.

A pair of satellite dishes cradled the culture.

Two years later, I made another attempt to interview an old-time bigot with a newfangled echo chamber. I wrote to Karl Hand, the founder of a second western New York group on the Southern Poverty Law Center’s list of the hateful, explaining that I would like to know what had inspired him to hold beliefs expressed on his website.

The chimerical diktats of the Racial Nationalist Party of America, which has a City of Lockport address, make post-Mein Kampf and gas-chamber pronouncements that the Shoah was no more than a hoax perpetrated by Zionists, and reflect the burning fear, common in the gin mills of certain white neighborhoods, that the American soul is endangered by the growing population of brown-skinned people in the United States, a demographic trend that Hand refers to as “genocide” against whites. Hand attended Catholic school as a boy but perhaps napped through the lesson on loving his neighbor; the RNPA online store peddles “white power” flotsam, including recordings of songs such as “Kajun Ku Klux Klan.”

In the weekly Niagara Falls Reporter, columnist Mike Hudson has warned that a newsletter distributed by the RNPA praises as a hero the executed terrorist and racist Timothy McVeigh — who grew up in a town between the close cities of Lockport and Niagara Falls — but Hudson added that the RNPA probably “exists only in the minds of no more than a few deluded individuals.”

Yet it exists somewhere. My letter was returned. “The RNPA, as a matter of policy, does not grant interviews,” Karl Hand had written in a margin. “We have no need of your publicity.”

I know where his apartment is but decided against driving 70 miles north to knock on the door: Hand’s We brought to my mind the buzz of the Royal We of Loneliness, the sound of a sole occupant of a hornets’ nest — best left just like that.

It turned out my next search was not for bigots and took me a mere 12 miles south of my home. Very surprisingly, at least to me, the Most Holy Family and RNPA websites had inspired me to do something I had not in years, except to attend weddings, communions, confirmations and funerals of friends, kin or neighbors. I went to church. I went on a humid morning when the lilac and black locust blooms had passed in Olean, a factory town that straddles the Allegheny River, although someone who stood under a single large basswood would hear so many honeybees it might seem the entire town was humming.

After the energetic service at the Rock of Revelation Church, I watched closely the children who passed through the vestibule. I watched two teenage girls and a boy pause on the hot blacktop of the parking lot to talk with a gospel musician, each in Sunday finery, almost their entire lives ahead of them, then cross the red bricks of Griffin Street, following a woman who was digging through a purse for car keys, and then, as they shut doors and the engine fired and they began to ride away safely, I understood exactly what had brought me to the church, what I was seeking, who I was looking for — though as it turned out, I never exactly saw them there, those four little girls with almost their entire lives ahead of them.

I was elsewhere and in a much later decade; not in Alabama, in Birmingham, in the 16th Street Baptist Church, in the minutes before the bomb went off in the Year of Our Lord 1963. 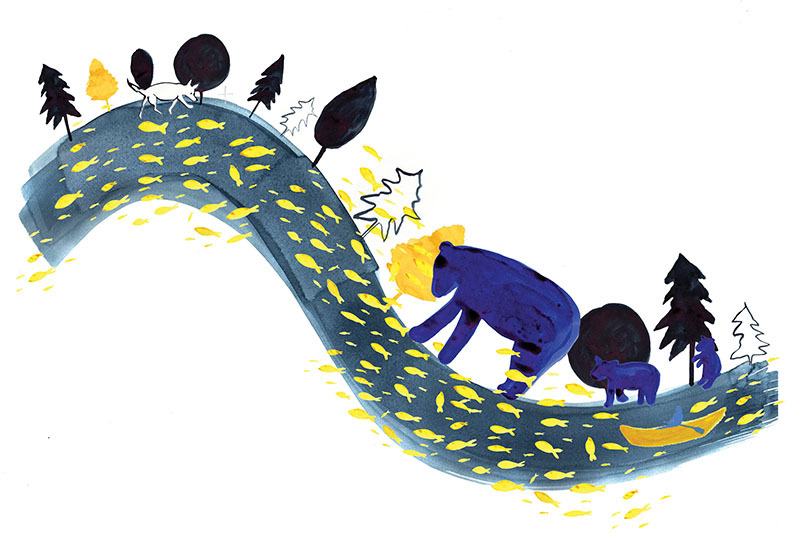 Campus Security warned in an email message several summers ago that students and we employees should avoid the soccer field, where a bear was taking an afternoon nap. Beyond the black sun-soaked hump near the goal line, the Allegheny washed the feet of hills, and, high on a sloping thigh above the river, forest enfolded a heart-shaped clearing called Merton’s Heart, after the writer Thomas Merton, who taught English from 1939 to 1941 at St. Bonaventure College, now St. Bonaventure University.

Merton sometimes crossed the railroad bridge over the river to climb the hills opposite campus, and according to local legend the opening was his favorite overlook — although it seems unlikely to have been especially attractive to him in actuality, having been created for the drilling of an oil well and installation of a pumpjack. Another local story has trees fall away in heart-shaped sorrow at the moment of his death in 1968. People on campus and in the surrounding community began evoking Merton in such legends and myths in the years after he left teaching, joined a monastery and became famous as a spiritual writer.

No story about Merton promises that a heart-shaped coppice will rise to sunshine, but wind has floated and deposited seeds, squirrels stashed nuts, brambles and shrubs and saplings poked skyward, and thin branches now dance in gusts of time in places where tall grass once bent in the Heart. The forest is edging into the opening, while to bears snuffling for sweet thimbleberries at the abandoned well site, humans on the distant campus must appear to scurry like delectable carpenter ants and cars to sheen like crunchy dung beetles. In a solo canoe and drifting down the Allegheny near campus last spring, I surprised bears on the muddy shoreline as they noshed wild carp seasoned with locally grown maggots, the sow huffing, muscling up the steep bank and waiting then at the grassy crest for the cubs before all three disappeared from my view, scrambling up to Merton’s Heart — I like to suppose — to dig for chipmunks and enjoy the panorama.

In 2008, the property that encompasses the Heart was sold. The new owners have notified the University that hikers from campus are no longer welcome and that trespassers will be prosecuted.

Essays by Mark Phillips have appeared in Commonweal, Salon, The Sun, New York Times Magazine and many other journals.