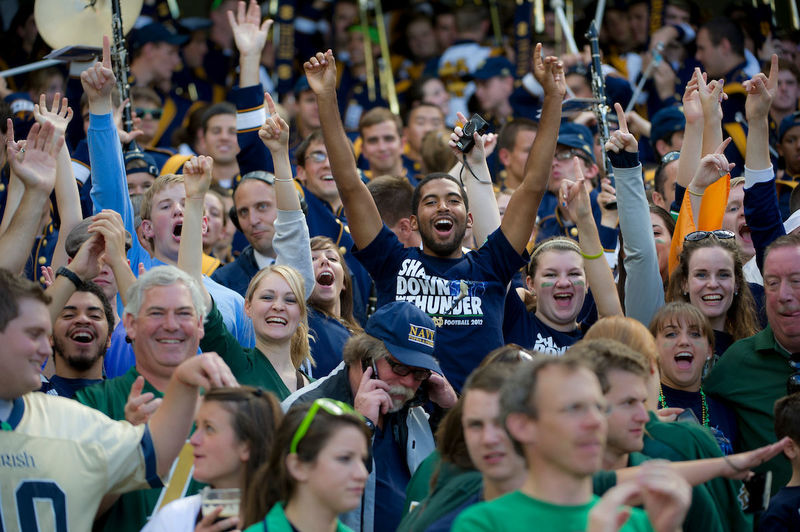 Dublin, 2012. Not pictured: University photographer Barbara Johnston. Pictured: student reaction upon seeing her with her camera.

At Notre Dame, there is no shortage of campus celebs. A student may find herself giddily recounting the tale of the Heisman contender assigned to her study group, or the politician’s daughter down the hall in her dorm. Add in the actual public figures who frequent our lecture halls and you’re bound, at some point, to have an encounter with celebrity.

But in my time as an undergraduate, my friends and I had eyes for just one ND celeb: University photographer Barbara Johnston.

Our Barbara worship began with two back-to-back Folk Choir trips that she’d been assigned to document: a winter-break retreat to Kentucky’s Abbey of Gethsemani and the week of events surrounding Notre Dame’s 2012 football game in Dublin. My drama queen-heavy clique mugged for Barbara’s lens wherever we could find it, and before long we were seeking out time with the woman who, to us, seemed just about as important as a Notre Dame employee could get.

What we didn’t know was that Johnston was a new addition to the University’s staff when we first met her — one who was getting to know the place at the same time that we were.

“One of my first trips was with the Folk Choir!” she says in our Café de Grasta corner booth. “I still remember you guys calling out my name at the football game in Ireland. It was so nice!” 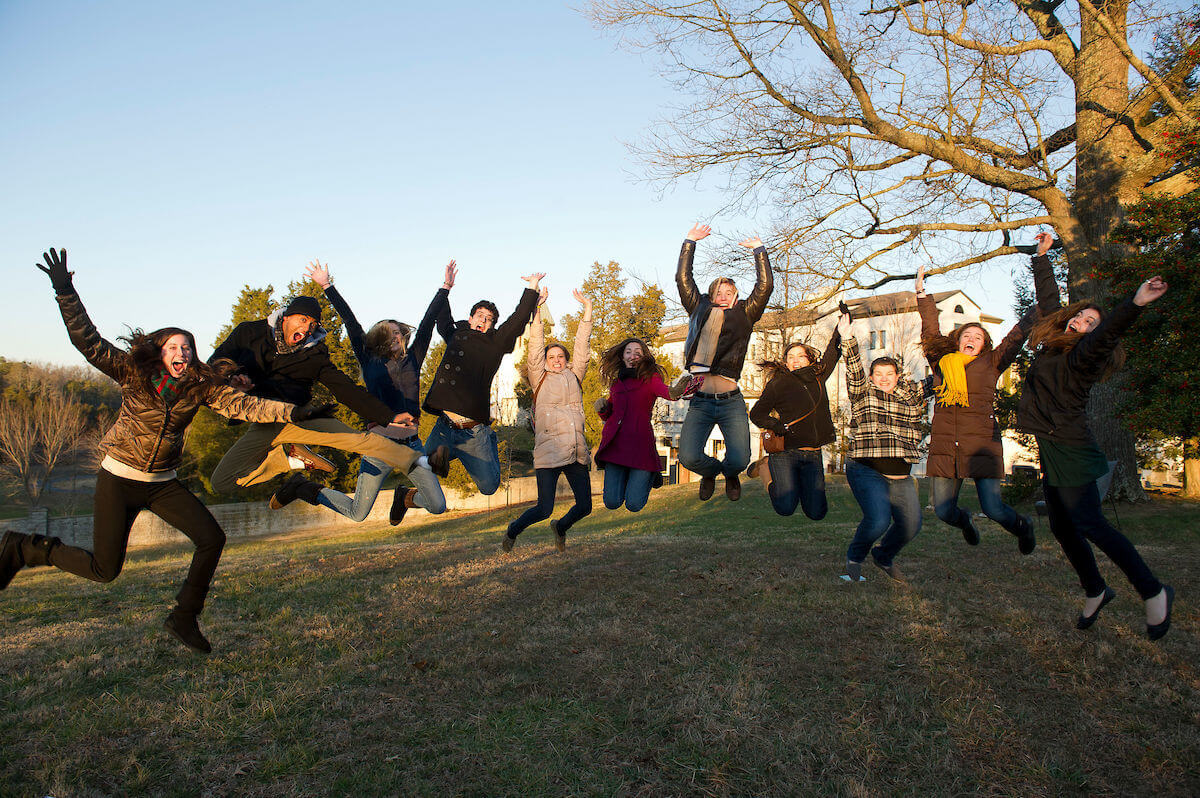 For Barbara Johnston, Folk Choir members do much more than smile for the camera on a 2012 visit to the Abbey of Gethsemani.

Before coming to Notre Dame in 2011, Johnston had a long career as a Philly-based photojournalist. She spent decades at the Philadelphia Inquirer and logged a number of years as a freelancer, but when the recession hit, she decided to look for roles with a bit more stability. An open position as a staff photographer at Notre Dame fit that bill, but she recalls thinking that it was a long shot.

“I thought, ‘What the heck,’ you know? ‘I’ll throw my resume in the hat,’” she says. “Did not expect to hear back from anybody.”

The long shot paid off. Johnston got the job, bringing an outsider’s perspective to a role whose other occupant — senior University photographer Matt Cashore ’94 — had been on campus almost nonstop since his arrival as a freshman in 1990. She quickly found her niche.

“One of my favorite things for the University of Notre Dame is portraits, and one of the reasons is it kind of reminds me of what I did for the newspaper,” she says. “I get to have one-on-one conversations like we’re having now. I really enjoy that. I really enjoy listening to what makes people tick, and there’s a lot of interesting people at Notre Dame.”

Though the work is different, Johnston says that many of the skills she learned as a photojournalist have transferred neatly to her time at Notre Dame.

“I was able to easily take the skills that I acquired at the newspaper and utilize them here,” she says. “They’re different, but they both have rewards.”

Like a newspaper job, Johnston’s role at Notre Dame requires her to photograph high-octane sporting events and high-profile public figures and to share work with a team: She and Cashore each document different events on campus, as directed by the marketing communications office. 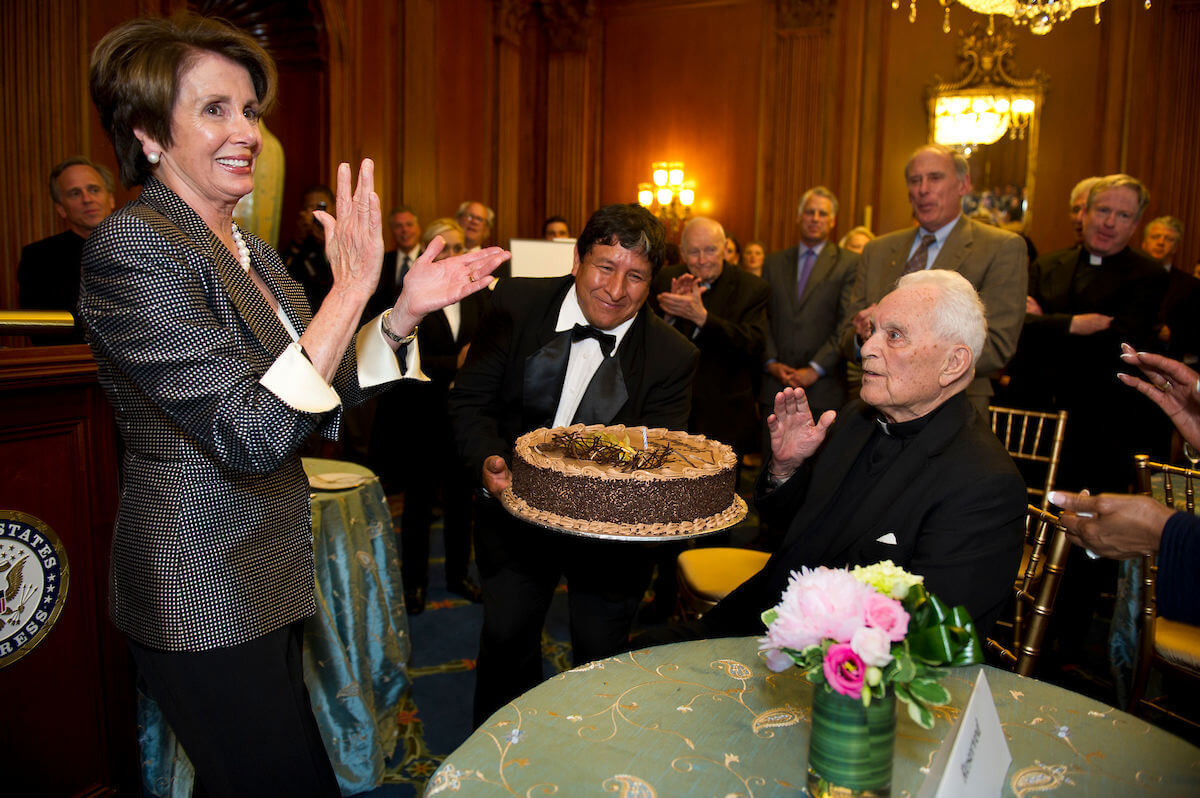 As she sees it, there’s no such thing as a “typical week” for a university photographer. She might be covering a routine town hall one day, photographing a new building site the next, and shipping off after that to a far-flung assignment with a writer from this magazine. In between, she’s on the lookout for what she and Cashore call “campus scenics” — the seasonal shots of the Dome and other campus landmarks that rake in the likes on social media.

She claims not to have a favorite from her assignments over the years, though she does say that some are more memorable than others.

“I flew to Washington, D.C., for [Father Hesburgh’s] 96th birthday. Nancy Pelosi invited him for a birthday party. So needless to say, that was a pretty spectacular day,” she recalls. “Lots of congressmen, congresswomen, senators. That was almost an out-of-body experience just watching that all unfold. I was like, ‘OK, Barbara, just focus on what you know how to do. That’s taking photos.’ And that’s what I did. I just went into photographer mode and captured it.”

With a bit of prodding, she even admitted that the Gethsemani trip my friends and I recall so fondly holds a special place in her heart.

“That was my first trip, so I do remember that,” she says. “I love the Folk Choir.”

Sarah Cahalan is a graduate student at the Medill School of Journalism at Northwestern University and a former associate editor of this magazine.