Two days before my long-planned meeting with Ben Radcliff, a Notre Dame professor of political science, the ripples of Bernie Sanders’ presidential campaign swelled into their first real wave. Sanders won New Hampshire’s Democratic primary, a predictable result by that February election day, but still a surprising affirmation of views that, not long before, were considered outside the American mainstream. 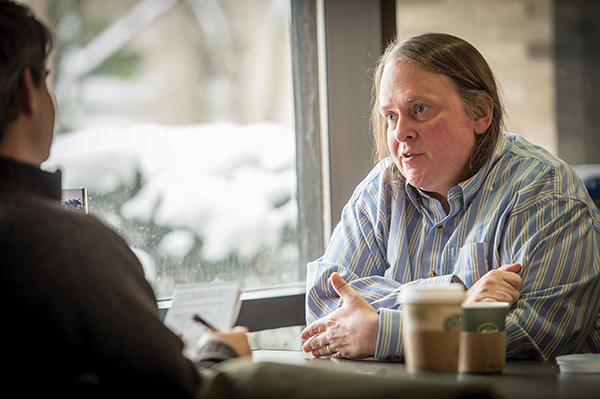 Presidential politics in general, and Sanders in particular, have nothing to do with Radcliff’s work, but the candidate’s social-democratic ideas relate directly. Over an afternoon caffeine top-up at Decio Commons, Sanders’ rise gave the issues Radcliff has been studying for nearly two decades a little breaking-news buzz.

His research deals with empirical evidence on a distinctly abstract subject: happiness. And the data show people are happiest in places that, to put it in 2016 campaign terms, feel the Bern. Subsidized health care, higher education, unemployment protection, retirement income and strong labor unions that improve wages and working conditions are common characteristics of nations with the happiest populations.

Call it a “safety net” or the “nanny state,” depending on your political preference, but Radcliff has reached an empirical conclusion he describes as “simple and unequivocal: Happier people live in countries with a generous social safety net, or, more generally, countries whose governments ‘tax and spend’ at higher rates, reflecting the greater range of services and protections offered by the state.”

This is counterintuitive and controversial in the United States, where every individual’s “pursuit of happiness” is installed as an unalienable right in the founding document. And given the ambiguous nature of happiness, the idea that even a personal, let alone national, mood could be divined from survey questions sounds dubious.

“When I first came across this research, I was skeptical,” Radcliff says, “so we have to be clear what we mean by happiness, which for one thing, of course, isn’t walking around with a smiley face or being in a good mood.”

Academics who study the subject define happiness as a general sense of well-being, characterized most often in studies as “life satisfaction.” Events might alter immediate feelings of happiness for better or worse, but people tend to return to a relatively stable level of well-being or satisfaction after the ups and downs. Surveys ask individuals to determine their own degree of satisfaction for themselves. Those results can then be used to analyze the conditions that promote or restrict human well-being.

However he slices the numbers, Radcliff finds the same connections. Reported life satisfaction increases in tandem with the size of government. A higher rate of self-identified well-being holds true even for people ideologically opposed to publically subsidized programs and for the wealthy, who are unlikely to need them.

“Even if you’re never going to rely on the social safety net, you benefit from all the indirect ways, which may be invisible to you,” Radcliff says. “Low crime, high social capital, all the kinds of positive benefits that society produces.”

The societies that produce those benefits for the largest share of their citizens are clustered in northern Europe. In the 2015 World Happiness Report published by the Sustainable Development Solutions Network, Switzerland, Iceland and Denmark were the top three. Norway, Sweden and Finland each finished among the top eight countries. The United States stood 15th, just behind Mexico. The West African nation of Togo came in an unfortunate 158th, last and least happy.

The campaign rhetoric of former Republican presidential candidate Bobby Jindal included criticism of programs like Obamacare. Such government intervention needed to be prevented, the former Louisiana governor said, to keep the American dream from becoming the European nightmare.

“That always made me laugh because, especially in the Scandinavian countries, people live longer lives, healthier lives and happier lives,” Radcliff says. “Sounds like a good deal to me.”

One important feature of the European social support system, he notes, is that programs tend to be universal, as opposed to means-tested American assistance such as Medicaid, which can stigmatize recipients. All German families regardless of income, for example, are eligible to receive at least 192 euros per month, per child.

In Radcliff’s comparisons among U.S. states, although their policy differences are less dramatic than those between countries, the patterns of reported satisfaction are the same. States with higher assistance spending, stronger unions and more business regulation have happier populations. He details all this in his 2013 book, The Political Economy of Human Happiness.

Radcliff has expanded the scope of his research, analyzing the physical and mental health of populations in relation to the size of government programs. A stark pattern of suicide rates, for example, emerged in comparisons between U.S. states.

“You have less suicide when you have more Medicaid benefits, more welfare benefits, just more liberal, in quotes, public-policy regimes,” he says.

Anecdotally, Radcliff has seen the results of his research during fellowship years in the Netherlands. People there, he says, make Americans seem depressed by comparison. The Dutch live with noticeably less stress about losing a job or falling ill because reliable support systems exist to alleviate the catastrophic effects of the unforeseen.

He emphasizes that he’s not pitting capitalism against socialism. Free markets and safety nets serve as complements to a strong society in Radcliff’s view.

“In my book, I probably say it a half dozen times in slightly different ways, that the market economy is one of humanity’s greatest achievements,” he says, increasing standards of living, personal freedom and economic equality. The “but” is that, in its efficiency, the market is indifferent to its human cost. That toll hit close to home after the 2008 financial crisis and made room, however fleeting, in the national debate for ideas Sanders has been promoting for decades with little traction.

I asked Radcliff about the “but” to the government social programs that he has found to be so conducive to well-being. What downsides have shown up in the data?

“They’re obviously expensive,” he says, and he’s willing to accept that there’s “a kernel of truth to what conservatives say — that the bigger the government is, by definition it imposes some kind of stress on the market economy. I guess that is a downside, potentially.”

He pauses, thinking. “Honestly, I can’t think of any others. Most of the complaints that people make about the welfare state just turn out not to be true.”

Radcliff says safety nets do not, for example, drive up unemployment or stifle innovation. The top of the Forbes 2015 list of the “best countries for business,” in fact, overlaps significantly with the World Happiness Report. Denmark is No. 1, with Norway, Sweden and Finland in the top six, all “thriving, vibrant market economies,” Radcliff says. The United States comes in 22nd.

“The free market,” he concludes, “isn’t incompatible with these kinds of social protections.”

On the contrary, Radcliff’s data identify the countries that invest in both as the happiest places on earth.