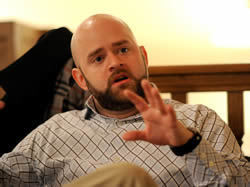 Twenty-three minutes into a conversation with law Professor Carter Snead about life and death and science and law, we hit on something that had made our jaws drop.

Not at the moment. We’re not reeling in surprise during our afternoon chat in the basement of LaFortune. Snead in fact is relaxing in a chair that rewards slouching, and I’m on a sofa trying to balance a file of his articles about end-of-life issues and stem-cell research and neuroimaging the brains of criminals on my lap, Starbucks on the floor by our feet.

No, we’ve just established that we’d both spent formative professional years in Washington, D.C. Like every engaged Washingtonian, we’d amused ourselves during annual State of the Union addresses by watching who’s standing and who’s sitting, who’s clapping and who’s not. Just last night, President Bush announced expanded federal funding for research on adult skin cells reprogrammed to “act like embryonic stem cells” and called for legislation “that bans unethical practices such as the buying, selling, patenting or cloning of human life.”

He got a standing ovation. On both sides of the aisle.

That is what had made our jaws drop.

I don’t follow these things closely, but I know enough about biotechnology and government and the politics of the culture wars to know that shouldn’t have happened.

O. Carter Snead, 35, on the other hand, was the general counsel for the President’s Council on Bioethics for about three years before he landed in 2005 at Notre Dame, where he teaches torts, constitutional criminal procedure and a wildly popular seminar on bioethics and the law.

He follows these things closely.

“The fact that people are standing up might communicate a realization on their part that the public is mostly opposed to cloning, both for purposes of producing children and for purposes of biomedical research,” he says.

So, sure, we’re talking about cutting-edge science and its implications for the inside-the-Beltway stuff we’d traded in for Notre Dame’s green and pleasant quads. But, as Snead puts it, really we’re talking about “what it means to be a human being and what we owe to one another.”

Bioethic debates
Take the stem-cell debate, which he considers, along with abortion, to be among the most pressing and profound disputes in the field, even if people are tired of the rhetoric.

“What we face in the context of embryonic stem cells is the prospect of using and manipulating and ultimately destroying human organisms at an early stage of development for speculative scientific research. If that’s what we’re doing, given the aspirations to come up with a bank of stem-cell lines that are immunocompatible and model different kinds of diseases, that’s a huge commitment,” he says. “We’re going to need millions and millions of embryos for that.”

Serious disagreement exists on the morality of perhaps exploiting an entire segment of the human population through speculative research, he says.

“Now on the other side, you have an argument about our obligations to the sick and the injured and the science itself, for the sake of itself, the pursuit of the truth. I think it’s hard to imagine a more serious conflict than that.”

We hadn’t even broached topics like genetics or research ethics or his critique of the proposed use of neuroscience in capital-sentencing guidelines. “Pretty much anything that’s noncontroversial is on my plate,” he says with a laugh that catches the attention of a quiet study group clustered in the booth behind him. “Things that people don’t tend to get upset about, matters of consensus, that’s where I work.”

The Great Books curriculum at Snead’s undergraduate alma mater, Saint John’s College in Annapolis, Maryland, prepared him for his tasks as a teacher and ethicist, just as the required three years of laboratory work—in which students re-create important scientific experiments spanning Western history—whetted his appetite for science. He studied law at Georgetown and clerked a year in the Santa Fe office of Judge Paul Kelly ’63 on the U.S. 10th Circuit Court of Appeals.

Then he went to work for the big firm. “Hated it.”

Snead describes his job on the panel President Bush created in 2001, along with the executive order restricting the use of federal funding on embryo-destructive research, as one of advising members about the legal and public policy dimensions of the ethical questions they were considering.

While he worked in a Republican administration, he carries with him the lessons the distinguished thinkers on the council imparted to him about holding the line between advocacy and scholarship.

“I don’t ask myself the question, how can I move the ball forward on x, y or z opinion that I have. That’s not scholarship, and that’s not what I do.”

Some skeptics do size him up as an advocate in scholar’s clothing. When he was ready to jump to academia just after the 2004 elections, he recalls, “I embodied the Bush administration to many of the academics who were interviewing me.”

We live in a pluralistic society, and we need to govern ourselves in these complicated and emotionally loaded areas, Snead had said when we first sat down. Even in relatively relaxed social settings, though, he notes that people often head straight for trouble with little respect for the person they’re talking to, or regard for the weight of the issues. He tells about meeting someone at a wedding and being told, 30 seconds into the conversation, that his boss was “a crook and a thug.”

He’s heartened by encounters with fellow academics in which personal contact and mutual professional respect trump intense differences in scholarship and personal opinion. Most people, he believes, crave civility and honesty and clarity, elements often missing in public policy debates.

Any remedies? Clearer intellectual frameworks, for one thing, something he’s working hard on. “More human interaction,” for another.

“The thing is that everyone you meet has some personal experience with an end-of-life situation with a loved one, or an assisted reproductive technology issue, or has somebody in their family who has Parkinson’s or something, or somebody has an abortion. These are human issues in the deepest sense,” he says. “I feel fortunate to be in the field.”