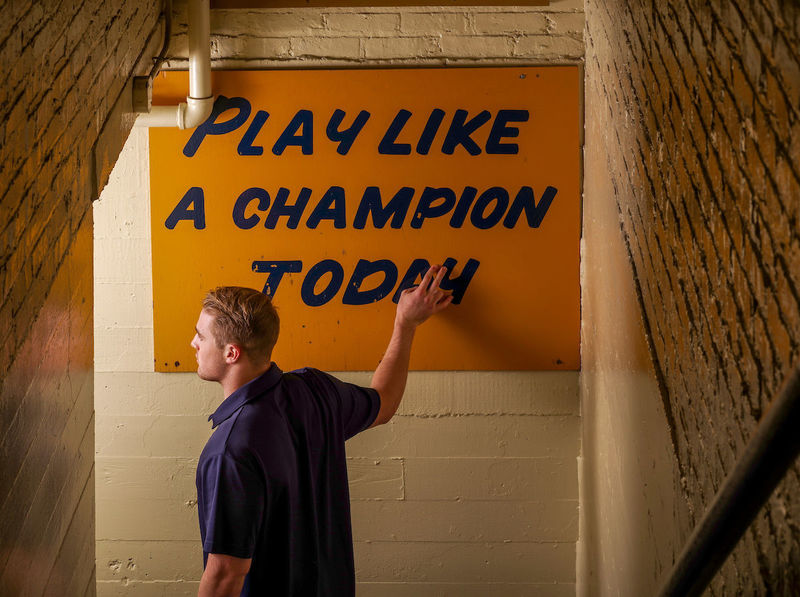 Clark Power will tell you that, when you talk youth sports in America, there are two stories that need to be heard. One has gotten lots of attention lately; the other goes largely unspoken. One has some distressing storylines; the other is potentially tragic.

Power and I talked about sports and kids this past spring at the Duncan Student Center when I was doing a story on sports and games for this magazine. I was asking the professor in Notre Dame’s Program of Liberal Studies about his thoughts on the serious business of youth sports and about Play Like a Champion Today, a project he started in three cities in 2004. The youth-sports program is now in 152 cities in 42 states. Over one million kids have participated. More than 63,000 coaches have completed workshops required for them to lead those children in efforts designed to develop them athletically and personally.

The title encompasses its twin goals. Play. Like a champion. The program has two fundamental conditions: Volunteer coaches must undergo the proper training, and equal playing time is diligently enforced. Power started the program because he saw things in his kids’ sporting lives he didn’t like. Too much emphasis on winning, stacking teams, unenforced policies about playing time, arguments between coaches and parents and referees. Coaches screaming at kids.

In the years since Power launched Play Like a Champion, the world of youth sports has become a $17 billion industry, with kids playing on year-round travel teams and families devoting weeknights to practice and weekends to elaborate tournaments in distant cities. Not only has the pressure to win intensified, but kids are pushed to develop their skills at a very young age. The adult-driven system has professionalized the games children play.

This is the storyline with distressing elements — the one much discussed by parents, analyzed by psychologists and sociologists, and encouraged by those who benefit from the burgeoning enterprise. It presents families with burdensome expenses to keep their kids on ball diamonds and playing fields.

Power calls this the “pay to play” syndrome. Sports has become the exclusive domain of the affluent; those kids play whose parents can afford the rapidly mounting costs. It leads to the second story — the one that rarely gets told when people talk about youth sports today.

There are avenues, he says, available to elite athletes, even those from impoverished backgrounds: specialized leagues, schools offering scholarships, adults taking an interest in the athletically talented. But opportunities have dwindled severely for those less gifted.

As financially strapped schools cut budgets, community recreation centers close their doors, after-school programs lose funding and kids so rarely initiate their own pickup games, those from lower-income families get shut out — especially in neighborhoods where parks and playgrounds are danger zones. That means they’re shut out, too, from the physical and psychological and developmental benefits of play, of sports, of teamwork, of coaches and community leaders who care. This injustice of opportunity based on income infuriates the child psychologist.

Learning to win is important, says Power, whose specialty is character development, morality and how kids acquire a sense of right and wrong.  “Everybody understands that. But while you’re supposed to win, it is not just to win, but also to play with certain qualities of character — that you should look after your teammates and be respectful.”

He continues, “As a developmental psychologist, I see that the one thing you learn with a team sport — that I’m not sure you learn in the classroom — is that there is no ‘I’ in team. You understand the importance of not being selfish, for the good of the common goal. That’s your reality on a good team.” And research indicates, he says, that “by being on a team, you’re much more likely to agree with statements that we give when talking about social responsibility — about being your brother’s keeper, standing up to people, looking after the kid alone in the lunchroom. So in a broader context, kids who are playing youth sports are more likely to have an ethic of being a brother’s or sister’s keeper.”

Kids who don’t have the opportunity to participate in sports, play games or become teammates supervised by caring, adult coaches miss out on the values and benefits that come with athletic engagement. Play Like a Champion, he says, is “culture-building, it’s ethos-building.”

Power cites to the program’s introduction in North Lawndale, a “poor, violent, exploited” neighborhood in Chicago. Three years ago community leaders there asked him to help. The streets were ruled by drugs and crime. Kids were being shot, recruited into gangs, picked up as delinquents by youth services. Very high-risk kids — the kids who most needed the escape, freedom and fun that play provides. Play Like a Champion Today helped establish the North Lawndale Athletic and Recreation Association (NLARA), which implements Power’s principles and programs.

“If you’re in North Lawndale,” says Power, “you’re experiencing trauma because your friend was shot or your brother’s in jail, and when this happens all these children . . . get traumatized.” Having “a play group where you’re there to have fun,” says Power, “becomes almost a kind of therapy.”

Power continues: “One of the reasons these people wanted youth sports is the kids get a mentor, a presence, an adult who cares about them, someone to talk to when things aren’t going well. And their chances for school success, of making it are much better if you have a mentor.”

The coaches there now, says Power, are “Mother Teresa-like people.” They talk about their work with kids as love and kinship.

Power points to similarities with CYO leagues, which he says were started in 1930 by a priest concerned about kids on the streets being recruited by the mob in Chicago. The Catholic Youth Organization offered sports as an alternative to organized crime syndicates getting kids to do their low-level dirty work. Getting North Lawndale kids into summer sports camps is crucial, he says, because “that’s when the shootings happen, and I feel like if we don’t have more success with the NLARA, these children are going to die.” Sports can be a safety net.

But the value in sports, in play, for both physical and mental health is too often lost to those who can least afford it and for those mired in environments that threaten their well-being. The discrepancy between families paying thousands of dollars a year for their children to play games and those children shut out of participation because they can’t afford it is an injustice Power struggles against. He’d like to give more kids the chance to play freely and happily — both those caught in a hyper-competitive system and those whose familial and financial limitations keep them from playing the game.