A few weeks ago, I noticed an opening in Notre Dame Magazine’s monthly interview series, “Having coffee with.” I decided to reach out to a favorite campus figure of mine from my undergraduate days, then-Keough Hall rector and now Campus Ministry director Fr. Pete McCormick, CSC, figuring now was as good a time as any to feature a priest.

I scheduled my interview with Fr. Pete, as McCormick is known around campus, for August 14. Just before our meeting, reports began circulating from the Pennsylvania grand jury heard ‘round the world: Hundreds of priests. Decades of abuse. A thousand victims.

My opening question was meant to build on the issues of faith raised in the magazine’s summer issue, but it took on a larger meaning in the context of the news breaking all around us as we sat in McCormick’s office in Coleman-Morse Hall. Given the current climate of the church, where does the work of Campus Ministry fit in?

“The message of the Gospel hasn’t changed,” he told me, recalling advice he received from a former mentor. “The vehicle by which it’s received has. We have to be thoughtful about allowing for people in this time and place, in a culture where, frankly, the Church hasn’t always been the best version of itself.”

We discussed the scandals a bit more, but it wasn’t the primary subject of our conversation or the foremost topic in my mind. Rather, chatting with FP (as my friends and I called him back in the day) felt like I expected it would long before the scandals broke — like a warm, engaging, funny conversation with a spiritually minded old friend who just happens to wear a Roman collar. 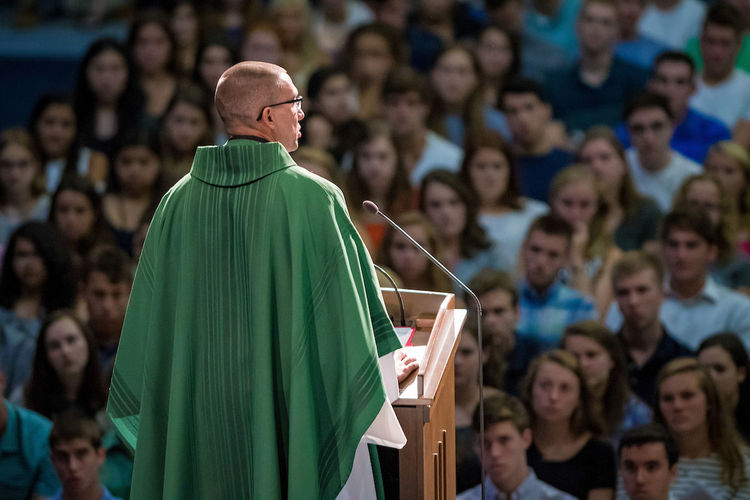 It’s ironic that he alluded to the Church’s “best version of itself,” because I’ve heard that same language used before — in the affirmative — about Fr. Pete. When my parents would come to see me sing at a Folk Choir Mass, they would always ask afterwards, “Why does Notre Dame have all the best priests?” You can probably guess which celebrant most frequently elicited that response.

When I left my interview, I texted a friend about the meeting, “THIS is what our faith should be.” What do I mean by that? Well, I’ll let Fr. Pete tell you.

“For 2,000 years, humanity has longed to understand who they are, what their purpose is, and how they can share their gifts with the world,” he told me. “And I just think that that, without God, is a lot more tinny. It’s not the fullest version of what we’re trying to accomplish. It doesn’t mean that it isn’t good, it doesn’t mean it isn’t valuable. But I do believe that coming to understand oneself as loved, as possessing inherent dignity, and knowing that that source of our very being comes from God, is so very important and brings genuine joy.”

He went on to say that, despite his passion for these ideas and his commitment to them, he can understand why some students may feel that Catholicism isn’t for them at the moment. But if Catholicism were always presented like he just described it, I thought, who wouldn’t be interested?

Even before the latest round of scandals broke, I had had my share of disillusionment with the Church. As an unmarried young person, I have often struggled to find a place in the family-oriented communities of the Catholic parish. As a feminist, I take issue with many of the ways that the Church has treated and still treats women. As an ally of the LGBT community, I disagree with much of our doctrinal teaching on gender and sexuality.

I loved the Catholic Church that I encountered as a student at Notre Dame. The Catholicism I found here had room for everyone, from the Latin Mass-loving seminarian to the radical social justice warrior on the picket line of a Black Lives Matter protest. Singing hymns on the beach with choir friends or sitting down for dinner at the Catholic Worker, I felt certain that the Church of Dorothy Day and the Catonsville Nine had a place for me, even if I did decorate my dorm room with Barack Obama posters and prefer happy hour at the bar to holy hour in the adoration chapel.

Since leaving my undergraduate bubble, I have found it difficult to find this Church I fell in love with. But it is alive and well in Pete McCormick’s department of campus ministry.

Fr. Pete says that his animating goal of his work is to help students with the “Big Three” challenges that they must contend with at Notre Dame: academics, career, and relationships.

“’What am I doing now to ensure my future, and who’s gonna be there along the way?’ That is what I’m all about,” he told me.

Amid the mounting pressures of elite academia — and the statistically demonstrated spikes in anxiety and depression rates that they inspire — helping students navigate the big questions of their lives is exactly what campus ministers should be focused on. To achieve that end, his team’s work begins with two steps: meet people where they are, and earn their trust.

“I’m thinking about my own life today,” he said as he explained his philosophy. “I’m not even thinking about when I was in college. I need people who can just help me situate and understand what’s going on. I think that’s a very human need. And I think, in Campus Ministry, we can help with that. We can do that from a very particular sense: that you are loved by God and there is a God who created you and you have inherent dignity because of it. Boom.”

(Interjections like “boom” are a regular part of the FP vernacular — and probably a reason why he’s such a popular figure around campus.)

Too often, he says, campus ministers skip steps one and two in their rush to step three. Plan retreats first; attract retreaters later. McCormick’s efforts in his three years as director have been to reverse that trend. He has dramatically expanded a one-on-one counseling and spiritual direction program called Need to Talk; he has overseen the addition of dozens of new hires to the department; he’s even relocated his personal office — from a remote corner of CoMo’s third floor to a can’t-miss-it space on the first — to show that Campus Ministry is, literally, here for you.

“I wanted, at minimum, the students to know, ‘I may not have spoken to FP or I haven’t walked into his office, but I gotta real good sense of where it is,’” he says. “That’s part of my efforts to make sure that I remain connected. Because I’m a big believer that it’s very hard to serve a population without knowing the population and being in relationship with them.” 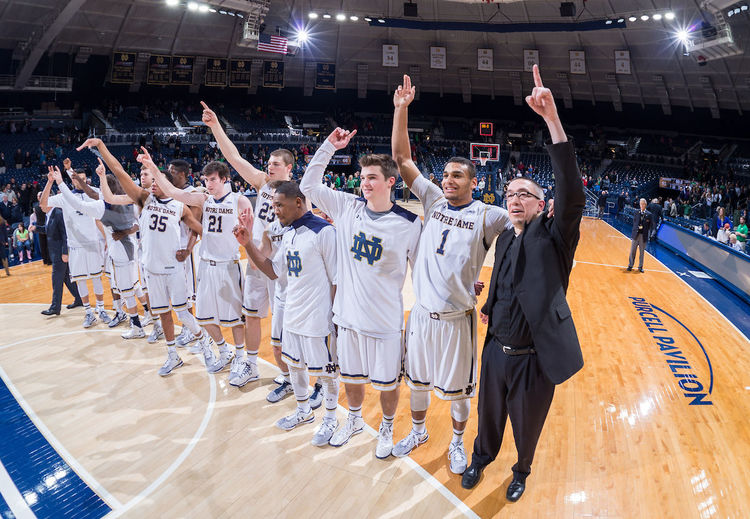 Fr. Pete at work in his role as basketball chaplain. Photo by Matt Cashore '94

To nourish those relationships, Fr. Pete has also maintained two narrower positions at the University: as a priest-in-residence at Stanford Hall and as chaplain to the men’s basketball team. The latter — which has earned FP some Sr. Jean-esque television acclaim during tournament time — is a particular passion project for the self-proclaimed “hoops junkie.”

I don’t know precisely what constitutes the Church’s best version of itself. But I can’t help but think it looks something like this. A Church that preaches, first, that God created us and loves us and can help us through any of our many human obstacles. A Church that goes to the margins. A priest who talks to athletes as much about scrimmages as sacraments, and who refuses to end an interview with a former student until he’s asked how she’s doing and spent a half-hour talking to her when it turned out that the answer was “not great.”

The Church has some changes to make in the coming months. I hope it takes a lesson or two from Fr. Pete.