Class assignments trigger student anxiety all across campus every day, no story there, but what happened to pianist J.J. Wright during his first semester at Notre Dame was more like existential anguish. 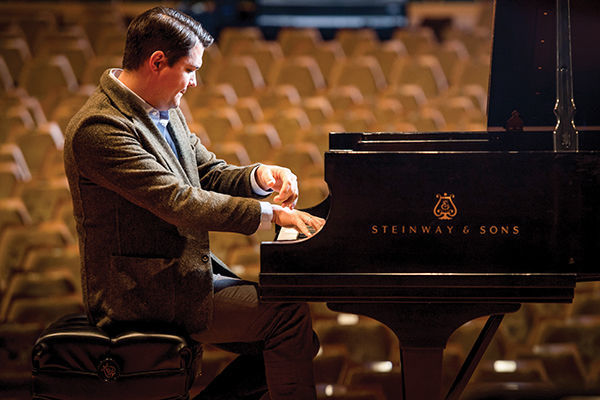 “And I was like, ‘I can’t,’” says Wright ’14MSM, ’17DMA, sitting in a booth in LaFortune this past September and grinning at the memory of his misery five years before. “I’d already left all that behind.”

“All that” was a jazz career he’d loved and, at age 27, an already sparkling string of achievements: Playing for presidents George W. Bush and Barack Obama during his four-year tour of duty as a musician first-class with the U.S. Naval Academy Band. Winning a Latin Grammy for Best Jazz Album of the Year in 2008 — Afro Bop Alliance, with Caribbean Jazz Project. Earning a performance degree from The New School for Jazz and Contemporary Music in New York City, where after hours he’d frequent clubs like Smalls in Greenwich Village, listening to new sounds, seeing and being seen.

He’d given it all up. He’d grieved it. “Because I thought that’s what I had to do,” he says, explaining his career decision in the summer of 2012 to study at Notre Dame and to serve the church he had loved since boyhood even more than he loved the bebop and cool jazz of his youth. “I thought there was a sense in which God was calling me to leave jazz behind and go pursue higher goals, or something.”

Now, months later, there was his sacred music professor, standing stoutly in his path and countermanding the will of God — and at Notre Dame of all places. Compose a jazz vespers service? It wasn’t a question of Wright’s talent or vision or experience. It was a question of soul. “No, you have to do it!” Fassler insisted as the semester wore on. I really can’t, I just can’t, the wounds are too fresh, Wright would plead, fearful of his own weakening resolve.

The result, Vespers for the Feast of the Transfiguration, is now a 39-minute album that the J.J. Wright Trio — Ike Sturm on bass and Nate Wood on drums, with Sharon Harms and Ashley Daneman on vocals — recorded at New York’s St. Peter’s Church in 2014. Wright set its release date for August 2017, just days before the annual Catholic celebration of that time on Mount Tabor when Jesus revealed his blinding divinity to Peter, James and John.

Father James Martin, the Jesuit author, calls Wright’s interpretation “lively, prayerful and inspiring, artfully mixing both the traditional and modern,” and filmmaker Tom Sandak ’04 directed a documentary about it that has aired on Boston-based CatholicTV and Canada’s Salt + Light Television.

Wright’s bygone angst over his unnecessary choice between jazz and “church music” reflects an age-old tension among people in the pews who are anxious about how thick and dark to draw the lines that divide secular performance from sacred prayer, entertainment values from the proper work of evangelization. The debate goes back to the earliest days of monastic chant and carries through to the present day. One voice or many? Unison or harmony? What about instruments? Too many notes? Does this give glory to God, or the musician? Do we clap when it’s over?

For many Christians, the very sight of drums in the choir loft is enough to make them flee the church. Jazz is particularly suspect. Only a century old, it has needed most of that time to shed its Cotton Club rep as “the Devil’s music.” And while its fans laud it as the height of human self-expression and creativity, that argument is hardly going to win over those who defend the peace of the sanctuary as the world’s last best place for the soul’s journey into God. 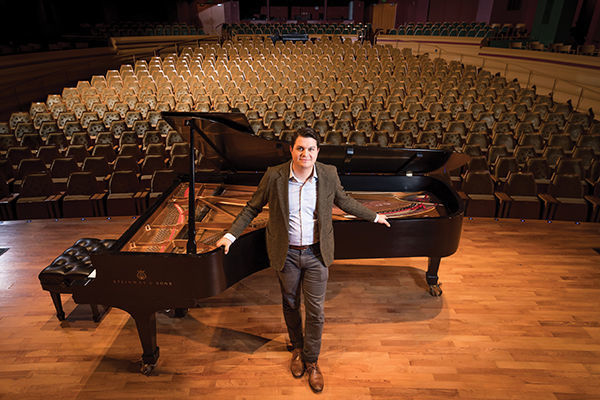 And yet, Wright says, when these critics engage with it, they will find that the sacred music tradition tells a more complicated story. “It’s really easy to make snap judgments about, well, ‘the music of the church is chant,’ and ‘chant is “pure” spiritual music.’ There’s an element of truth to that,” he concedes, and it’s worth noting that “Invitatory,” the first track of Wright’s Transfiguration, is an old-school plainchant. “But it’s not the whole picture. If you look at the entire history of sacred music, it’s an incredibly rich and diverse repertoire that we have.”

Over the next five years at Notre Dame, Wright swam happily through that repertoire, deepening his acquaintance with history as student, instrumentalist, conductor and composer, all while knitting the wound of his brief but penetrating split from jazz. His website cites Palestrina and Bach, Cannonball Adderley and Thelonious Monk as “just a few of his harmonic and melodic inspirations.”

Meanwhile, he was recording. The Trio’s 2014 Inward Looking Outward drew widespread raves, noted jazz critic Ted Gioia, for instance, citing it among his picks for best albums of the year. In 2016, he teamed up with the Notre Dame Children’s Choir and the Chicago chamber group Fifth House Ensemble for another original series of jazz meditations on the O Antiphons — youthful voices, skipping rhythms and complex chords exploring and unfurling the names of the yet-unborn savior as recited during vespers over the last seven days of Advent. The effort debuted at No. 1 on Billboard’s classical albums chart and landed Wright an interview with NPR’s Scott Simon.

By that time he was in Rome, researching for his doctoral dissertation and completing an internship with the Sistine Chapel Choir. It was there he got to know a 17th-century Italian Jesuit, who seemed to be waiting for Wright around every corner.

Giovanni Francesco Anerio, a contemporary of Shakespeare and Cervantes, began his artistic and religious career as a boy singing in the Sistine Chapel under the direction of the lustrous Giovanni Pierluigi da Palestrina, champion of the Catholic Counter-Reformation and master of Renaissance polyphony. In time, Anerio carved his own niche in music history as the composer who elevated the oratorio into a distinct musical form, blending the theatrical retelling of biblical stories with musical cues drawn mostly from the madrigals of his day — those popular, often romantic poems sung a cappella in groups of no more than eight voices.

The religious musical theater of Anerio’s vespers services was his gift to a Church scarred by a century of Reformation and anxious for spiritual renewal. The oratorios themselves were prayerful performances, both secular and sacred in origin — “innovation in service of evangelization,” in Wright’s phrase. “The most important thing,” he says, is “the way they create a new pathway for people to relate to their faith.”

And they were a big deal. The dramatic vespers services at Rome’s Chiesa Nuova, or “new church,” were the city’s most anticipated musical events of the 1610s and ’20s.

Wright traveled to Rome with his wife, Alexandra, and their three children in 2016 to study Anerio’s work, but he didn’t expect him to become a friend and hero. He didn’t know he’d be able to see from his apartment window the church where Anerio had worked for 10 years. Nor did he know, during a family car trip to Assisi over the Christmas holiday, that when his children wailed for an emergency bathroom break and the Wrights in desperation turned up the winding road toward the walled city of Narni, they were paying a visit to the composer’s birthplace. They stopped, ate lunch, walked around for an hour. Wright only made the connection the next week, back in his office.

“Didn’t know,” Wright repeats, laughing, “and again, I want to put my foot in my mouth ’cause at this point I'm three months into my doctoral research and I didn’t put it together.”

Wright’s scholarly goal was to create modern performing editions of five of Anerio’s 94 “spiritual madrigals.” He pushed further, translating their words, working with poets to recapture their beauty in English and producing original sacred jazz oratorios that tell the same five stories: Abraham and Isaac, the Prodigal Son, the crucifixion and resurrection and the conversion of St. Paul. Drama and Devotion premiered last June at the Chiesa Nuova, where Anerio’s work had debuted 400 years before.

Within a month, Wright was back at Notre Dame on his first day as director of the Folk Choir, with no more apologies for the role that jazz and other popular forms may play in the transcendent tradition, a canon that includes Duke Ellington’s three sacred concerts and the Masses of Dave Brubeck, Vince Guaraldi and Mary Lou Williams.

Williams’ story resonates. Once upon a time, the “First Lady of Jazz,” undergoing a spiritual awakening and conversion to Catholicism, felt she needed to leave her music behind. Sound familiar? “Yeah,” Wright says. “She eventually befriended this Jesuit priest who convinced her that ‘Your thing is to do this music. You have to do it.’”