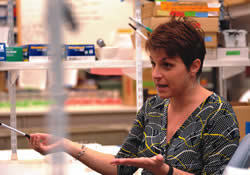 The eye of the storm resides in room 192 of Notre Dame’s Galvin Life Sciences Center, a neat office crammed with shelves of biology, ecology and chemistry books, manuals and research papers. Sitting at her desk, Jennifer Tank is noticeably chagrined by the swirl of controversy that has hovered around her and her colleagues since their paper on the effect of Bt corn in streams was published last October in the Proceedings of the National Academy of Sciences (PNAS).

It’s not every day, after all, that the work of a biogeochemist sparks an international stir, eliciting newspaper interview requests from as far off as Germany. “This seems to be the research paper that will never end,” the 41-year-old ecologist says with a sigh.

“I told my colleague, David Lodge, that we never expected such a huge reaction, and he said, ‘Well, you’ve probably never done anything before that anyone really cared about,’” Tank says with a laugh. “And he’s right. Ninety-nine percent of what we do as ecologists nobody but other ecologists has a grasp of. But if you hit a hot button that could potentially cost . . .” her voice trails off.

The hot button she has hit is a potential serious problem with genetically modified corn. Tank is quick to emphasize “potential,” a qualifier her critics often seem to overlook.

The ND biologist explains that Bt corn has been engineered to incorporate a pesticide, the Bacillus thuringiensis (Bt) delta endotoxin, into its structure, effectively inoculating the crop against such pests as the European corn borer.

The U.S. Environmental Protection Agency approved the modified corn in the mid-1990s with the stipulation that the material remain on the field. “But they’re not stream ecologists,” Tank notes. “And apparently there was little thought about the streams that run through the middle of crops and the potential consequences of that.” With the popularity of no-till agriculture, she points out that a lot of dead material stays on the soil for six to eight months of the year.

All of which begs the question: Does that material get into the streams? If so, does it have an adverse effect on the ecology of the stream? On the basis of her fieldwork Tank’s answers in order are “yes” and “maybe.”

“We’ve found that the debris moves into the streams after fall harvest, some time in the winter when things have dried out. You’ll get a windstorm, and then all this genetically modified corn material blows across the landscape, hits a ditch and falls into the stream bed, and that’s where it stays.”

The question then becomes: What happens to that material as it decomposes in the stream? This is where the answers become fuzzy. In lab experiments, Tank and her research associates found that when caddisflies, an ecologically important aquatic insect, were fed Bt corn debris, their growth was inhibited. The result is troubling since it means the Bt toxin may adversely affect insects beyond the targeted pests. Aquatic insects such as the caddisfly are important because they help to decompose plant debris in streams and they serve as food for higher organisms.

When the ND biologists examined caddisflies in the wild, however, they were unable to detect any growth inhibition. “While we could show this isolated effect in idealized lab conditions, it may be that in the field these streams come under so many assaults that it doesn’t make any difference,” Tank says. “Ecologically there is a lot wrong with them. They suffer from eutrophication, sedimentation, channelization. . . . We’re just adding one more thing.”

When the scientific paper was published, the toxicology results came under withering assault, and there were demands for the paper’s retraction. However, both the PNAS and the National Science Foundation, which funded the research, have supported Tank and the work. For that she is most grateful. “Until you experience it, you don’t realize the pressure that can be placed on science when it has some sort of monetary repercussion,” she says. “Actually, our work can’t be pigeonholed either ‘for’ or ‘against’ genetically modified crops.”

However, both sides in the controversy have attempted to hijack Tank’s results to bolster their agendas. An official of the European Union recently argued against genetically modified crops, incorrectly citing Tank’s work as unequivocally saying they damage stream organisms. On the other side, industry-related critics have misrepresented her work in a similar way and attacked her for it.

“The critics take our results a step too far,” Tank says. "All we really are saying is that the role of streams has been underestimated, that potentially they can move these materials far from the fields where they were planted. And there may be unintended effects, including _possible_—underline possible—harmful effects to stream organisms. But we don’t know.

“The point is when you talk about licensing genetically engineered crops, somebody should be considering this in the equation. Hopefully, we are just doing good science that will inform someone making decisions.”

John Monczunsk is an associate editor of this magazine. Email him at monczunski.1@nd.edu.