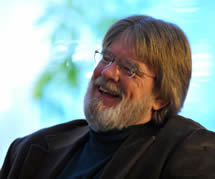 I went to talk with John Sherry about the economy. I meant to ask about America’s consumption-driven, materialistic society and how the current financial crater has people consuming less (which seems good) but how less spending is hurting the economy (which is bad), and how actually we need people to spend more so the business of America gets healthy again (which would be good).

I don’t normally talk with people about capitalism and America’s free-enterprise system, because I know so little, but John Sherry ’74 knows lots about marketing and consumer behavior. He’s Notre Dame’s Raymond and Kenneth Herrick professor of marketing and the departmental chair. Better yet, he’s a really good guy and an anthropologist by training. So I went to talk to him about this fascinating choreography that weaves together our self-indulgent drive for wealth and possessions with the purring of economic engines and the simple, self-denying lifestyle Jesus talked about. I also thought I might ask about the global reach of all this, and how the music that is marketing propels this dance of tugging parts.

But I ended up talking about Clif Bars.

We didn’t immediately talk about Clif Bars — those tasty and nutritious granola-ish energy snacks I like so much. We talked first about Super Bowl commercials (“teaching opportunities”) and the legitimacy of subliminal advertising (interesting, he says, that consumers are so convinced of the “mystical, magical power of advertising”) and Valentine’s Day (what poor gift-givers men are, “mainly giving toasters and lingerie, which essentially are for us, right?” and how rings reflect “social status and cultural norms,” made a little messier by “female emancipation and women being more dimensional,” but “still saying ‘I belong to somebody, I’m owned,’” although there’s now also “the bling finger on the right hand — open territory not yet colonized” that jewelers are going after).

We also talk about how ancient marketplaces were often outlined with boundary stones to designate the proper enclosures for selling, swapping and bartering. “People have always been suspicious of marketing,” Sherry says in answer to my question, “Are people suspicious of marketing?” So that’s when we talked about those archaic boundary stones and how they were often “invested with a divinity,” such as winged Hermes — Greek god of commerce, invention, cunning and theft — and other trickster gods. “So there’s always been this tension between consumers and marketers,” he says, because marketers “bring you interesting new products, but they also bring you seductive ideas that may be threatening to your current belief system.

“On the other hand,” he continues, “you’re living in a culture that is so thoroughly marketized that a lot of contemporary theorists say you cannot tease apart marketing and culture, that they’re so tightly interwoven that you pull the thread and you get marketing everywhere.” His teaching and research, he says, are based on “the assumption that marketing is a powerful shaper of cultural stability and of cultural change,” adding, “Marketing is also a way of structuring other people’s experience, a way of shaping behavior that may not have anything to do directly with buying and selling products.”

We Americans do swim in a sea of messaging, promos, hype and advertising, peer pressure, the call of mass marketing, societal expectations and low- and high-pitched voices coaxing us to buy, belong, keep up and express ourselves. The houses we own, the clothes we wear are as much self-expression as useful, practical commodities. They represent us.

I confess to Sherry (Notre Dame classmate from that era of anti-materialism in which my patched jeans and faded flannel shirts cried out, “I am me, not what I own”) that I’m fine with my current level of possessions — until I go to the stores or peruse the catalogs that come into my home. Then my appetite for want is altered.

“The concept of what a consumer is,” he says, “has changed pretty dramatically over the past 20 years, certainly the past five or 10 years. Marketers used to think consumers were relatively passive . . . and if we do this particular influence-attempt, run this ad or change this price point or make the merchandising in this store a little more interesting, then they’re going to change their behavior and maybe buy our product.”

Sherry says marketers have shifted away from “this primitive notion of how consumers operated” toward a sharper understanding of engagement as they’ve integrated an anthropological, sociological view of marketing. “Anthropologists have always known we live in an experience economy,” he explains. “All consumption is about experience. And once you take that view, products are not simply tools or benefits or practical utilitarian kinds of things, but they’re really more about meaning. They’re the way people create meaning and transform meaning and so forth.”

I know the Subaru Forester I now own means a lot more to me than the succession of Toyota Corollas I drove for years. I sit taller in the saddle now.

But this strategy to implant meaning in all the stuff of my life is also a more invasive procedure for getting into my head. “And that leads to a more active view of the consumer,” Sherry says. “So the way we talk about it now is they are co-creators or co-producers of whatever the experience is that marketers are trying to get across. Consumers want to be engaged, involved, and they believe the stuff marketers have put in the universe is what they use to build their own universe.”

The meaning of coffee

And so I think of Starbucks.

It’s not just coffee. It’s the whole experience. It’s the place, the setting, the aromas, the music they play and sell. It’s organic and fair trade and internationally exotic. “It’s not just coffee,” I say. “They’ve created a whole atmosphere, an ambience, even a lifestyle that somehow speaks of quality, and quality coffee that other places, like McDonald’s, are trying to copy. And the whole coffee thing has become a cultural phenomenon.”

Sherry has obviously already thought about this. “Howard Schultz,” he says of Starbucks’ founder, “has made many public statements about the ‘third place’ nature of Starbucks. It’s not home. It’s not work. It’s somewhere in between, that you feel comfortable in, that even though you’re with people who are strangers and kind of anonymous, they’re familiar.

“And you have this experience that just feels abidingly right for you. For some people it’s the Old World coffeehouse ambience, and for other people it’s an office. It’s the most widely used non-home office site. All kinds of business gets transacted there. And seeing the same familiar faces over and over again, even though you don’t have any interaction with them, you never speak to them, you don’t know their names, there’s a comfortable feel there. And that,” he points out, “is a whole part of the brand that doesn’t have anything to do necessarily with coffee.”

There’s something else, he says. “There’s a whole Starbucks language that people use to order coffee. You can customize your coffee in a way that is not only right for you but announces a certain kind of distinction. You reel off about 14 different adjectives in front of your latte and you get it that way and everybody sees you do that and you acquire this air of sophistication.”

But I take mine straight and black, I say, and I really like Starbucks coffee — much more than most any coffee I get anywhere else. And Sherry observes that we went from thinking of coffee as fuel, basically as something you drank to keep you awake or work more effectively, to thinking of it the way we think of other beverages — with different flavors, kinds, tastes and blends.

“It’s gotten an awful lot like wine connoisseurship,” he says. “People went from being coffee drinkers to being connoisseurs of coffee. And again, that lends an air of sophistication to the whole process that wasn’t there before. And moves coffee from being simply a drug that wires you for better, more efficient work to one that allows you to have these intellectual, cultural experiences.

“It’s the most pervasive and accepted drug that we have in society,” Sherry says. “It alters your consciousness in so many different ways, and here’s a firm that’s figured out a way to tap into that.” And incited a societal tide that has spilled caffeine into drinking water, has spawned any number of new high-energy, high-octane beverages and has spurred the soft-drink companies to amp the caffeine levels of their soda pop.

The result is a highly caffeinated nation with lots of hyper, maybe edgy people in a big hurry to accomplish lots — right now. This minute. Running laptops, cell phones, BlackBerrys. Flinging pictures into cyberspace and using words like ramp up, deliverables, metrics and synergy.

Anyway. What I said about Clif Bars is that I like them. I think they taste good. You don’t have to chew each bite for 20 minutes for it to be swallowable. They don’t taste like airy rice cereal on steroids. Nor do they leave you gagging or thirsty — an important consideration for backpackers looking for a nutritious fix far away from vending machines.

“But here’s the thing,” I said at the conclusion of my product endorsement, “what I really like is that right there on the wrapper it says these two guys were doing a bike race and they finally got fed up with all the other protein bars, the granola, the high-energy bars they had been eating, and they decided to make one of their own. So using their own recipe, they concocted these things, right there in their mother’s kitchen, and named ’em after their dad, Clifford. All that’s right there on the wrapper, and they also tell you what organizations they support. And it just feels good to eat them. I feel like I’m supporting a nice family of people like me.”

John Sherry smiles and says, “All of which has been carefully cultivated by marketers, so when you consume that, you consume all that meaning along with it. Not only are you getting that nutty, crunchy goodness of the physical product . . . in fact, that may be the least attractive thing, those things taste terrible.”

“But it’s an acquired taste, right?”

“No, they’re great,” I persist. “But here’s the deal. I’m very well aware I’m being played. I’m taking in all that messaging. I know I’m being duped ’cause who knows if any of it is true or not.”

And Sherry explains, “On the other hand, in the recognition of being duped, there’s this postmodern irony going on, right? I mean, you share in the complicity of the whole thing. You’ve suspended your disbelief, you allow yourself to buy into this homey fantasy, and the bar tastes better as a result.

“With all this additional meaning the brand brings, it tastes better because you’re consuming ideology along with the actual product.”

And that, I realize now, adds new meaning to the old line that you are what you eat.