On August 14, a Pennsylvania grand jury reported seven decades of sexual abuse in six Catholic dioceses involving 300 priests and 1,000 victims — covered up by Church authorities. Three days later, The New York Times carried an op-ed by Kathleen Sprows Cummings ’95M.A., ’99Ph.D., in which the director of Notre Dame’s Cushwa Center for the Study of American Catholicism called for “nothing less than radical, wholesale reform.”

The Pennsylvania native, who later told me a similar report from the Archdiocese of Philadelphia in 2005 had been “personally very painful,” says this latest round “hit me in a very different way.” She wrote in the Times: “My once-polite requests for incremental reform have morphed overnight into demands that church leaders voluntarily relinquish their place at the head table.” She said it was time to rethink her oft-used analogy about women finding a seat at the table. “We need to rip off the tablecloth,” she wrote, “hurl the china against the wall.” 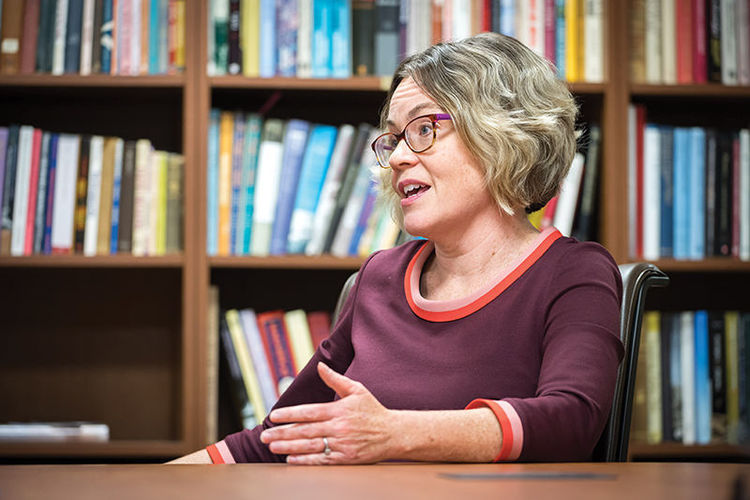 For some of us, the Pennsylvania findings felt like more of the same, the latest in 20 years of pedophilic scandals in the news. For many others, this felt different. I heard declarations after the report that the Church’s walls were caving in, that Church leaders could no longer take the moral high ground on any issue. Why was this so different from all the previous revelations, cover-ups, settlements and vows to be different going forward? I asked Kathy Cummings to help me find an answer.

“First of all,” she says, after explaining how her thoughts and feelings found their way into the Times, “the magnitude and the scale. I mean, we’re talking about a lot of children and a lot of priests. But it also indicted the culture that supported it to a greater degree than other reports did. You could still make a case, and people did, saying, ‘You know, a few mistakes, a few bad apples.’ But this one, you really can’t. You see this culture of abuse, and a culture of wanting to protect the institution at all costs. That was really made clear to me, and that’s what made me really angry.

But in the past, I say, there were cover-ups and bishops moving people around, and with no repercussions, no real punishment. Clerics got reassigned or went to Rome, left off the hook.

“That’s all true,” Cummings agrees, “but it was the interconnectedness of it all, and I think what really got me this time was the lack of contrition on the part of the bishops.”

The associate professor of American studies adds, “I’ve been hearing people parse words about the report, how the grand jury reports only one narrative, and that there are still good priests. I mean, we know there are still good priests, but this has caused me to question, too, my own complicity in this. You know, we knew. We knew there were priests who liked to give back rubs, as one of my Catholic Youth Organization friends says. We knew, and we didn’t do anything.”

I point out that it feels as though the Church has sometimes seen itself as immune to criminal prosecution and exempt from the need to report to authorities what was happening to children. Why did she think that was?

“I think the way the Catholic Church developed in this country was to protect itself, for valid reasons, in the 19th century, when there was a lot of anti-Catholicism. And it looked inside itself and thought, It’s us against them, and we have to be as strong as possible to fight what’s coming from the outside. Then, when that was no longer true — because you can’t make an argument that Catholics are oppressed as a group anymore — those patterns still persisted.”

People acknowledge that sex abuse happens in the workplace, in schools. But, she says, “What should not happen is the sense that the institution is more important than coming to terms with that abuse. Any place you have people in a position of power over other people who have no power, or very little power, like children, there’s going to be abuse. But the Catholic Church has that insular dynamic, and I also think the Catholic Church didn’t deal very well with the turmoil of the ’60s, the changing sexual mores, trying to understand what it means to be a sexual person, and to have healthy relationships, or a healthy debate about that.”

But, she notes, “there’s a culture of silence about all things sexual in the Church.”

Cummings continues, “A lot of people blame celibacy. I don’t think that’s the case at all there. You can be celibate and have a very healthy sexuality, and an understanding of yourself as a sexual person. But I think what’s been — what’s at work here is a sense that seminaries did not do a very good job of helping people in formation explore that.”

Do you think, I ask, that, because the Church is such a male-dominated organization, there wasn’t a complete understanding of the impact of molestation and pedophilia on children?

“I’ve thought about that question a lot,” she says, “and, yes, I think that’s absolutely true. Now a lot of these bishops, they’re uncles. They must have children in their lives they love, too. But for some reason, they didn’t fully grasp it. I am utterly convinced in a way that I haven’t been before that the gravity of this crisis would have been apparent far sooner, and the consequences far less devastating, if there had been women involved in these conversations. And fathers also. I think [if there had been] women in positions of real power — and not just in positions of advising; given a real say in what happens next — things would look different now.”

And I assume, I say, that part of this has to do with priests and bishops being put on a pedestal and thinking that they’re. . . .

“They’re above the law,” she says.

But clerics, I say, being elevated and insular, have not shown a willingness to listen to others as they’ve sought to protect their own, but seem to have a hey, we’ve got this covered attitude.

“The abuse of power that happened in Christ’s name calls into question the invocation of that power at all,” she says.

“Well, the first thing,” she begins, “we absolutely have to come to a reckoning. We’re not even there, not even close to that yet. I think we need to give it some time. I’m a historian, so I know that people throughout history almost never voluntarily relinquish power. It just doesn’t happen. I think that’s what the Church needs to do, but. . . .”

Wasn’t that part of Vatican II, though, to give more power to the laity?

She also talks about the need for true atonement, perhaps penance on the part of bishops. She recommends bringing people together — at Notre Dame, at the Cushwa Center, the nation’s leading institute for studying Catholicism — to talk about healing and how organizations work, about codes of silence, about Pope Francis and the month-long Jesuit spiritual exercises in which a week is spent dwelling on sin, shame, confusion and sorrow before moving on to an eventual resurrection. Her list of issues to discuss includes “all things sexual” and the “exclusion of the laity and particularly women from actual decision-making” and “a sense that, as God’s representatives on earth, [the clergy] have the ability to pastor themselves” — like the shepherds in Ezekiel who have been feeding themselves instead of their sheep.

But people grip tighter to power when they feel like they’re losing it, I note before questioning her thoughts about why some people devote themselves to the Church while others have left it.

Cummings cites Dorothy Day, referencing a letter in which Day says she never expected leadership from popes and bishops. “It is the saints that keep appearing all through history who keep things going,” the Catholic Worker founder wrote in 1968. “What I do expect is the bread of life, and down through the ages there is that continuity.”

Cummings says she had just finished writing a book, an American history told through saints — “through holy people, or people who are considered holy. And it is the saints who keep showing up and carrying things forward. That’s me speaking as a historian and as a person of faith. I mean, the saints have never let me down, not even once. Bishops have let me down a lot in this time. So I think, what is the hope for the Church? I think of the saints first, and I think of the sacraments.”

Has there been a time in the Church’s history comparable to this?

“Well, I think we have to think of the price of reformation. I think it’s that massive.” It could takes decades or centuries to see the full effect, she says, “but I think this is going to be of that magnitude, a reform of that magnitude.”

Could this be a time of renewal where the Catholic Church, 50 years from now, would be better than ever?

“Absolutely. I mean, going back to the Protestant Reformation. Even before that immense challenge to the Church, there were seeds of the reform already happening. I think about the flowering of Catholic religious orders in the wake of the Protestant Reformation. The Jesuits, the Ursulines. I think those seeds of reform are already emerging. It’s a little hard to see while we’re in the midst of it, but I believe they’re there and I’m not looking to the bishops. I think the bishops are still looking to the bishops to solve this, but the people who created the crisis are not going to get us out of this crisis, and I don’t think they’ve realized this yet.

Shortly after this conversation, University president Rev. John I. Jenkins, CSC, ’76, ’78M.A. established two task forces in response to the crisis in the Church. One is the Research and Scholarship Task Force, headed by Cummings and Ann Tenbrunsel, the Gallo Professor of Business Ethics, to examine ways Notre Dame’s scholarly and research expertise might address the current crisis. The second is a Campus Engagement Task Force to solicit observations and recommendations from the campus community. Both committees will send a report and recommendations to the president.