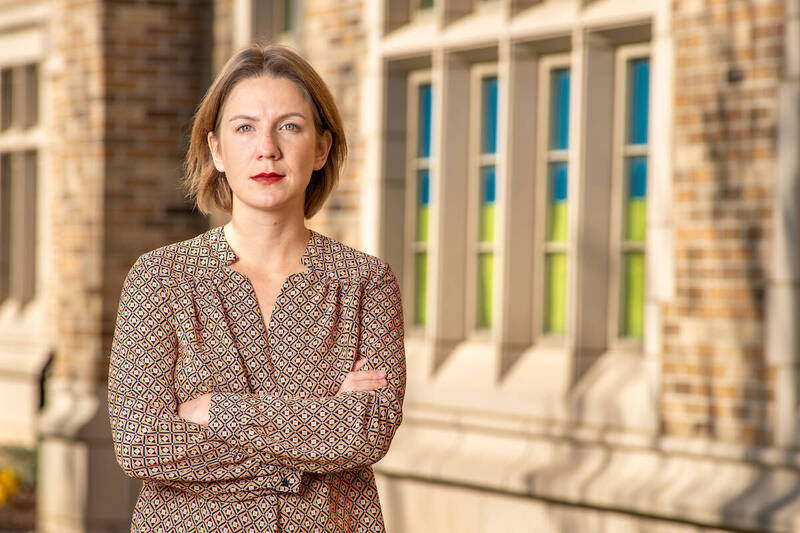 From half a world away, Kristina Bohdanova follows reports of missiles raining down on her native Ukraine, of torture and other human rights abuses, of Russian threats to use nuclear weapons. The news steels her in her work to help her countrymen vanquish the Russian invasion and rebuild their homeland.

Bohdanova, 30, is a medical doctor and a graduate student in clinical psychology at Ukrainian Catholic University. She’s one of 10 UCU female exchange students who studied at Notre Dame during the fall semester as part of a partnership between the two schools.

A physician since 2016 with a degree from Zaporizhzhia State Medical University, Bohdanova spent most of that year in the port city of Mariupol, working for a unit of Ukraine’s national guard that began fighting pro-Russian forces after Russia’s seizure of Crimea.

When she completes her master’s degree this year, she intends to become a practicing clinical psychologist. Needs will be great in war-torn Ukraine, and she is determined to use her training to help her people overcome war’s devastation and prepare for the nation’s future.

Bohdanova mourns the death and destruction in her country. But she also recognizes how she and other Ukrainians have grown while facing extreme adversity. “What we are trying to emphasize is that we are new people — stronger, more prepared, more resilient,” she says.

‘The biggest shared loss is the lost peace. We lost ourselves as we were before February 2022.’

We’re having this conversation in October, soon after Russia launched more than 84 missiles and air strikes in a single day, one of the largest attacks in the war. Those attacks on Kyiv and several other Ukrainian cities killed at least 14 people and wounded 97 others and knocked out power across the country. As winter approached, Russia was targeting infrastructure and utilities, including highways, electricity and water pumps.

Bohdanova is a trained volunteer for the Sane Ukraine project, a nonprofit organization founded in March 2022 to help people overcome trauma and develop psychological resilience. The group started its work in Lviv, in western Ukraine, and more than 100 trained volunteers provide services throughout much of the country.

“We are still in the beginning of what we want to achieve with this project,” she says. Trainers work with Ukrainian soldiers, teachers, parents, children and displaced persons, teaching them trauma first aid and resilience tools. Some of Bohdanova’s fellow trainers are also UCU students.

“When we talk with soldiers, we teach them about psychological trauma, why fear is normal and what physiological reactions to fear they may feel. We teach them how to recognize when they or other soldiers are distressed,” she explains.

Sane Ukraine’s training includes mind-body relaxation techniques such as focused breathing and progressive muscle relaxation. The volunteers also train military officers how to recognize signs of suicidal ideation among their troops and how to provide support.

“Overall, we are trying to destigmatize psychological help,” Bohdanova says. Some Ukrainians view mental health assistance with suspicion, in part because during the nearly seven decades Ukraine was part of the Soviet Union, many citizens were locked up in mental institutions for speaking against the government.

Ukrainians displaced by the Russian attacks can open up to project volunteers about such tragedies as the death of loved ones and the loss of their homes.“The biggest shared loss is the lost peace. We lost ourselves as we were before February 2022,” Bohdanova says.

Like many Ukrainians, Bohdanova had friends and relatives in Russia. She cut off communication because, she says, they readily accepted Russian President Vladimir Putin’s claims that the war — which he calls a “special military operation” — was prompted by Ukraine. “We really tried our best, but then we heard they were actually happy that Ukrainians were dying,” she says.

Most of her former friends in Russia are educated young adults. “I wouldn’t have expected them to support atrocities,” she says.

In a major escalation of earlier hostilities, Russia last February launched its large-scale invasion. Ceaseless violence has resulted in tens of thousands of deaths on both sides and Europe’s largest refugee crisis since World War II.

Bohdanova says she can’t make plans more than a few days in advance, because everything depends on the war news. But she realizes she’s stronger and more resolute than before.

For many Russians, the Cold War never ended, Bohdanova explains. “It’s the main narrative in Russia: that they are a great empire” and that some undefined coalition of Western nations is trying to control Ukraine, she says.

Many Russians never accepted Ukraine as a free nation after the Soviet Union dissolved. “Some Ukrainians also thought we were more similar than different. But now the majority of us realize how different we are, after all the atrocities and all the damage to our country,” she says.

Bohdanova grew up speaking mostly Russian in her hometown of Zaporizhzhia in southeast Ukraine. After Russian troops invaded eastern Ukraine in 2014 and annexed the Crimean Peninsula, she stopped speaking Russian. Like many Ukrainians, although bilingual, she now speaks and writes only in Ukrainian.

Bohdanova was born in 1992, the year after the Soviet Union collapsed. She’s only known Ukraine as an independent nation and has always considered herself a Ukrainian citizen. “My mother comes from a region in central Ukraine, and I spent all my summers in central and western Ukraine. I was perfectly able to speak Russian and Ukrainian, and I had a lot of friends” who spoke both, she says.

At Notre Dame, Bohdanova took several courses she says will help in her work, including one on developmental psychopathology, a suicide-prevention seminar and a global mental health class that focused on assisting people in war-torn regions.

She hasn’t been to her hometown in a couple of years, and she doesn’t know when she’ll be able to visit. Often appearing in war headlines, Zaporizhzhia is home to Europe’s largest nuclear power plant. The plant has been knocked offline several times during the fighting. The Russians have seized it, triggering concerns of a potential major nuclear accident.

How has life changed since last February? Bohdanova says she can’t make plans more than a few days in advance, because everything depends on the war news. But she realizes she’s stronger and more resolute than before. And she’s thankful for the support of Americans and others who acknowledge that the Russian invasion was unprovoked and unjust.

Bohdanova was set to return to Ukraine in December. In early 2023 — in addition to finishing schoolwork for her degree — she’ll take part in a new effort to provide psychological rehabilitation to soldiers serving in Ukraine’s south and east. After treatment, the soldiers will return to the front line to continue their fight for their country’s freedom.

Bohdanova will also keep volunteering with Sane Ukraine. “I’m going through training to become a psychotherapist, but I see a future with this organization,” she says. “Long after the victory, our services will be needed.”

She is firm in her conviction that Ukraine must not sign any peace agreement. “It won’t solve anything,” she says. “If you try to placate the tyrant, it will be worse in the future.”

Margaret Fosmoe is an associate editor of this magazine. She can be reached at mfosmoe@nd.edu or @mfosmoe.