Halfway through a meeting with Laura Carlson, I’m lost.

This is only a test. Via a virtual-reality headset and controller connected to a computer in the Notre Dame psychology professor’s lab, I’m navigating a smoke-filled shopping mall, trying to find the only safe exit before fire consumes the building — and me with it.

The old-school video game feel of the graphics doesn’t diminish the tense authenticity of the experience. Even though I’m in no actual danger, I have knotted shoulders, a quickened pulse and clammy palms worthy of a real emergency. 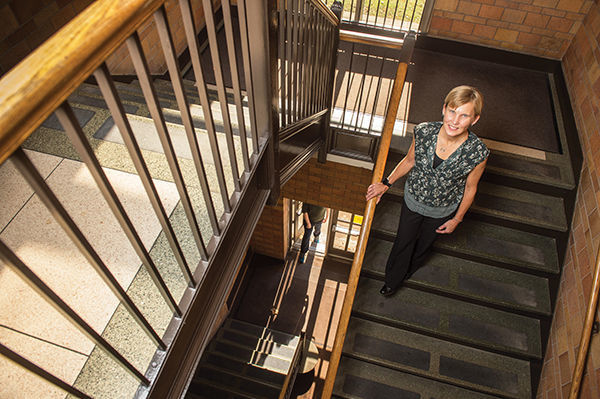 If I ever did find myself in a burning mall, this exercise makes clear how much trouble I’d have finding my way out. For Carlson, the data she collects from volunteer rats-in-a-maze like me reveals the different strategies we use to navigate under duress.

Carlson and her researchers evaluate your general sense of direction with a questionnaire and tests involving the orientation of objects and the configuration of shapes. Then you wander through the mall in a relaxed scenario, accomplishing tasks on a to-do list before meeting a friend.

While you get acquainted with the building, the researchers measure your baseline anxiety levels under those relatively calm circumstances. You have errands to run and an appointment to keep. You’re not rushed, but you don’t have time to waste either. There’s a low-grade, everyday busyness to the situation, providing routine stress readings to compare to your reactions in the crisis to come.

Find this store, you’re instructed, then proceed to another location. Signs in the corridors provide direction — and I crane my neck so far to look at them in the virtual-reality environment that, in photos snapped during my test, my head is turned 180 degrees away from the computer screen. I’m in the mall.

True to my sense of direction (defined, I’m pretty sure, as “aimlessly whirling compass”), I’m not of the mall. Even though I’m aware of exactly what’s being measured and know more than most subjects about the challenge to come, I can’t process the spatial information around me — the location of the exits, what roads they lead to, the relationship between one store and another. After a turn or two, I doubt I could even retrace my steps just to get back to where I started.

Then the fire starts. Now I don’t just have to finish a couple things in time to meet a friend. My life depends on finding the one and only safe escape.

The concourse clouds with smoke. Since “smoke-filled” is the prevailing condition of my wayfinding mind, I don’t feel much more lost than I did before, just more rushed. I start to hurry, going from dead end to blocked exit, back through the haze toward the faint light of a store’s sign to another dead end — or maybe the same one as before.

Classifying the different ways people operate in those conditions helps the researchers identify approaches — multiple exits, for example, or signage that can be read and understood on the move — that accommodate all spatial abilities and strategies. A convenience under normal circumstances could save lives in an emergency.

Carlson uses the term “legible” to describe buildings that helpfully usher users through the space. “By legible,” she says, “I just mean: Is the structure transparent?”

Regardless of how apparent the paths through a building might be, people navigate in distinct ways and with differing levels of awareness of what’s around them. Truly legible buildings, she says, communicate directions even to the spatially illiterate and anticipate the different paths people might take.

For instance, there are regional differences in how people process their geographical location. Do you give directions using “left” and “right” or “east” and “west”? Do you know the way from Point A to Point B based on landmarks along the way?

Much depends simply on how closely you’re paying attention to your surroundings. Have you chauffeured a child for 16 years, only to discover that they have no idea how to get to a familiar place when they start driving?

Carlson focuses on figuring out how public spaces can better accommodate all the methods we use to find our way. But architects, she notes, have much more than legibility to worry about when designing buildings. Structural and aesthetic considerations overshadow navigation. She gets that.

Think of a place that’s easy to find your way around at first glance, Carlson says. “Those are really boring buildings, right?”

The 2004 Rem Koolhaas-designed Seattle Central Library, on the other hand, is not a boring building. From the street, it’s a jagged-edged steel and glass shard, all sharp angles and overhangs that appear not to fit together.

That reflects the disorienting experience many users have reported inside. Escalators bypass floors. Elevators and stairs are hard to find from the main lobby and exits just as difficult to identify once inside among the stacks.

A key feature of the building is a books spiral, an unbroken four-story curving series of shelves that display all nonfiction works without separating them by classification in different parts of the library.

“There are no salient landmarks in the book spiral, and the majority of signage refers to a user’s location in the Dewey Decimal System rather than to the building.” Carlson notes in a 2010 Current Directions in Psychological Science paper “Getting Lost in Buildings.”

The building’s layout presents so many navigational challenges that a patron who had made weekly visits for two years confessed, “I’m still not sure how I would get out if there was ever a fire.”

Another befuddled visitor said, “I . . . left the building as soon as I could figure out how to get out, hoping I wouldn’t have an anxiety attack first.”

Those visitors’ confusion could be considered “the fault of the building,” which is one of three ways Carlson categorizes navigational errors. Casinos and hospitals, like libraries, often fall into that category. Ikea, too.

There’s also “the fault of the cognitive map,” the way we (mis)interpret the relationship between objects or places. Consider a few of Carlson’s geographical trivia questions:

Which is farther west: Reno or San Diego?

Which is farther south: Orlando or Tijuana?

Which is farther east: Santiago or New York City?

In each case, it’s probably not the one you think. The answers are Reno, Orlando and Santiago.

We know the relative locations of continents and states, she says, and infer from that the comparative orientation of the cities.

Having established that common flaw in our reasoning, Carlson offers another comparison. Which is farther north: Calgary or Seattle?

It’s Calgary. Our relative geographic knowledge doesn’t always lead us astray. Maybe we can only guess at answers to those questions, but Carlson says they’re “usually good guesses.”

When it comes to reasons we get lost, there’s also — and now we circle back to me — “the fault of the navigator.”

Different methods of navigation include imagining a bird’s eye view of your environment or, instead, using landmarks as guides along the way. Some people prefer a navigation system that remains fixed north. Others turn maps to position them in the direction of travel.

Carlson considers attention to detail a key advantage among people with a strong sense of direction. Their perception of the world around them transforms the sights, sounds and scents they absorb into navigational beacons.

Also, she says, look back. Literally. Turn around now and then to see the path you’ve taken from the perspective of your eventual return.

As for buildings, in addition to multiple exits and simpler, more comprehensive signage, dead-end warnings could be a life-saving addition. In Carlson’s research, the most common error subjects make in emergencies is adding time and distance to their escape by going down blocked corridors.

I’m one of them. Unaware that I was moving along a no-way-out hallway in the virtual mall, with little visibility and even less intuition of where the exit might be, the final dead end I encountered was my own.