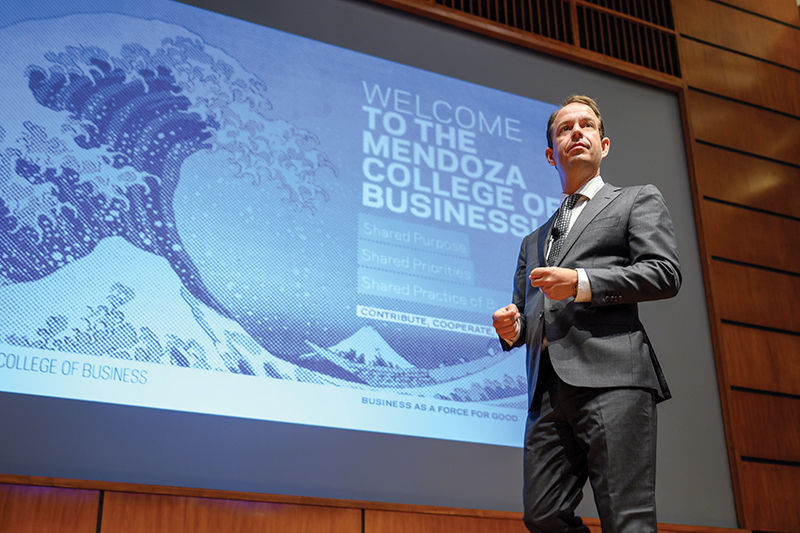 Martijn Cremers is marching me up the central spiral staircase inside the Mendoza College of Business. I’m not in trouble, I don’t think. He simply wants me to see one of the first important decisions he made last year during his tenure as the college’s interim dean.

Through the door to the faculty lounge we go, and there it is: a French press coffee maker the size of a photocopier. Three types of beans, any flavor you like — with a standard-model coffee maker as backup.

Keeping the good joe flowing and the faculty and staff chipper was a “small” move, he admits, but a widely appreciated one. These days, as the Bernard J. Hank Professor of Finance navigates his first year as the fully fledged Martin J. Gillen Dean of the college, the pace of growth and change inside this building is crackling.

New curriculum adjustments mean that designated Mendoza intents should take three business courses during their first year, while other freshmen may also register for an introductory class if seats are available, moving forward a threshold long reserved for sophomores. Faculty hires are up, with even more to come, and Cremers has already undertaken a top-to-bottom reorganization of the college’s marketing and admissions functions — with an eye toward pressing Mendoza’s advantages in the race to attract top students to graduate programs.

Further, the business analytics major that Cremers’ predecessor as dean, Roger Huang, introduced two years ago is booming, already punching in just behind accounting as Mendoza’s third largest undergraduate discipline. (While the new program has launched Notre Dame to the forefront of the big-data trend in undergrad business education, at least one thing hasn’t changed around here: Finance still reigns, enrolling almost as many majors in the 2019-20 academic year as accounting, analytics and marketing combined.)

The biggest news yet may be the creation of four minors — accountancy, digital marketing, real estate, and innovation & entrepreneurship — designed to draw in students from other schools and colleges. The idea is to give all Notre Dame undergrads who want to study business their long-coveted shot while leavening Mendoza classrooms with other ways of thinking. “Once they leave Mendoza for the work environment,” Cremers says of his students, “most people they’re going to work with will not be business majors.”

But these developments point toward something deeper about Cremers’ vision for the college’s direction: what he calls an “integrated vision of business” that is grounded in Catholic social teaching and firmly in touch with the humanities and the new big-data frontier.

On one level, that means meatier interactions between Mendoza students and their peers at all levels. The real estate minor, for instance, spans business, architecture, economics, sociology, political science and law — even engineering. The burgeoning Business on the Frontlines course, which offers deep dives into regions of the globe ravaged by war, genocide, poverty, environmental exploitation or refugee crises, has been a pioneering “experiential learning” opportunity and Mendoza recruitment magnet long restricted to MBA students alone. Now it is opening slots to their grad-student peers in global affairs and the law. Cremers wants the college to become more of a team player on campus, and he expects such exchanges of resources, personnel and ideas to pay big dividends for Mendoza faculty and students — what they give being more than matched by the enrichment they’ll receive.

He also wants more diversity in Mendoza classrooms — socioeconomic and intellectual. “We really need to improve in all of the above,” he says.

What he’s pushing for is a college that forms students who enter the workforce prepared for the world of profits and losses and shareholder value, but who are ready to elevate beyond all that and to orient their work, their career moves, their executive decisions toward the common good. He wants business leaders alert and ready for the competitive realities of the marketplace, but animated by the kind of cooperation that delivers real, sustained value not only for investors but for all stakeholders — customers, suppliers, employees and the communities where they live. In short, when Martijn Cremers imagines Mendoza alumni 40 years hence, he sees a world where “success” is defined as one’s contribution to the “shared purpose” of human flourishing, to widespread prosperity, to consideration of the poorest and the least, to the material and spiritual welfare of all.

That’s where Catholic social teaching comes in. And he knows something about it, because he’s taught a high-demand course that melds the “Wall Street” and “Main Street” views of corporate governance with the “common good” perspective of the Church ever since he arrived at Notre Dame in 2012.

“Culturally speaking,” notes the dean, who describes a “secular” upbringing in his native Netherlands far removed from the Catholic devotions of his ancestors, “we’re no longer in a place where we have easily shared understandings of human flourishing.” So I ask him to explain.

“A Catholic mission in business — a lot of it is also catholic with a small ‘c’, based on these universal human values,” he begins. “So: the notion of the intrinsic dignity of every single human person. The priority of solidarity — of the focus on those with the greatest needs. The importance of subsidiary development, of opportunity, of a social environment where you actually help each other, you serve each other. You don’t interfere: You recognize the importance of human agency.

“By connecting the mission of the business school with the Catholic mission . . . of the University,” he continues, Mendoza may contribute to the concept of integral human development championed by Pope Francis and very much under discussion in other quarters of campus. “That’s the starting point to really cooperate with the Keough School [of Global Affairs], with Arts and Letters, with . . . all the different schools.”

Born in the small city of Boxmeer in the Netherlands’ Catholic south, Cremers, 44, studied in Amsterdam and attended New York University for his doctoral studies in finance. Conversations about faith with their fellow graduate students led him and his wife, Liesbeth — who are now raising their six children on Notre Dame Avenue — to attend Mass at the campus parish and begin dipping into the works of C.S. Lewis, G.K. Chesterton and Popes John Paul II and — later — Benedict XVI.

The financial crisis of 2007 hit while Cremers taught at Yale, and he has written about how conversations among the faculty there awakened him to “the power of the finance industry to destroy as well as build lives.” Now, as dean, he turns to an ambivalent image of creativity and destruction, culled from outside the Catholic world, to illustrate his vision for Mendoza.

The Great Wave off Kanagawa, possibly the best-known work of the 19th century Japanese artist Katsushika Hokusai, appears in Cremers’ office and his presentations. The woodblock print depicts a 40-foot rogue wave that appears to be curling around the summit of Mount Fuji, far in the distance, while men in three shallow fishing boats labor against it.

For Cremers, the wave represents the “very competitive, dynamic, challenging environment of business,” and the mountain is a compass that gives the fishermen direction. “For us at Notre Dame, that’s the gospels and the social teachings of the Church that test us,” he says. “They give us direction” toward that shared purpose of human flourishing.

But the boats? “That’s a fleet of ships sailing toward a common destination, and so that really symbolizes, in my mind, what business is about,” he says. “You need to get there together. You need to cooperate with all the different stakeholders.”

True solidarity, he explains, is not mere reciprocity, this-for-that, quid pro quo. “That’s what transactions are about . . . the world of contracts, of competitions, of markets, which is a world I study as a finance professor, but it’s . . . not the same, I would say, as the world of cooperation.” In that latter world, you pull the oar because what’s good for you is good for everyone; you don’t wait to see who’s matching you stroke for stroke.

Cooperation is the manager who reminds you how you contribute to the company’s mission. It’s the management culture that incentivizes close collaboration among teams. It’s the corporate board of directors that commits to long-term success, weighing the consequences of its decisions on workers and their families and other stakeholders, and not just on investors. And that’s a big deal because, as Cremers points out, “well-diversified institutional shareholders,” such as pension funds, investment banks and mutual funds, “have the strongest possibility of exit” — of jumping ship on a company and leaving everyone else to slip beneath the wave.

Such a commitment is hard to make when you’re locked in the competitive mindset, he says, “because it requires you to limit your own power in the short term.” But here’s the paradox: “Committing to cooperate with others may actually be in your own . . . longer-term self-interest,” a conclusion supported by research that Cremers and his partners published just before he was named dean.

There may be more of such insights to come, but the man has a college to lead, with challenges of its own. Like the declining demand for MBA degrees that all U.S. B-schools are facing together (Mendoza is actually pushing against the trend: At press time, submitted applications to its two-year MBA program were up 53 percent and applications from women up 84 percent over the same time last year). Or like making space for its growing faculty and classroom demand in a 24-year-old building already bursting at the seams. Cremers and his team of associate deans and program directors, many of whom are as new to their jobs as he is, are enthusiastic about their opportunity to shape the college’s future and humble about what’s been entrusted to them. The dean expresses both emotions in — what else? — the language of cooperation. “Be patient with me,” he implored the faculty at a meeting in November. “We’re very new at this. So we need your feedback, we need your advice, we need your help.”