Phil Sakimoto has a quintessential American story, but he’s reluctant to tell it. Although it’s a proud family history of resilience and courage, it’s also one of national shame.

We’re sitting at a campus café a few days after the 75th anniversary of the Pearl Harbor attack, an unsettling time of year for Sakimoto. He’s the son of the leader of a U.S. Army antitank company that earned 43 Purple Hearts in European combat. Born in Los Angeles, he is also an American of Japanese ancestry. Every December 7, his resemblance to the enemy of distant memory draws angry epithets. 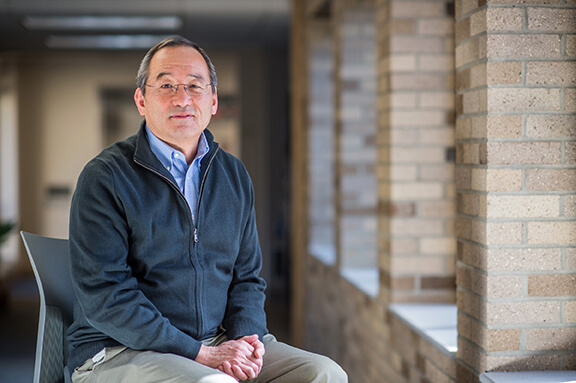 He’s hesitant about mentioning that treatment or drawing public attention to the wartime oppression of his parents’ generation. He’s shared the story with his sons’ junior-high classes, which my brother happens to teach, so I’ve heard it secondhand. I invited him to lunch, hoping to hear it from Sakimoto himself.

He’s ambivalent. The director of Notre Dame’s Program in Academic Excellence and a former NASA official doesn’t want to be perceived as an angry messenger of American dishonor. On the other hand, he believes what happened to his family and thousands of others should be remembered as a defense against history repeating itself.

The story starts in Japan.

Around the turn of the 20th century, Sakimoto’s paternal ancestors, descendants of a long line of Buddhist priests, lived in a small village near Hiroshima. They followed ancient tradition, passing the village priesthood from father to eldest son.

The eldest son who would become Sakimoto’s grandfather did not want to live out his life in the village. His options were limited to carrying on the tradition or leaving forever. He boarded a boat for Los Angeles. “He was a very devout Buddhist all his life,” Sakimoto says. “He just didn’t want to be the priest in a little town.”

On his mother’s side, the family lived outside Tokyo in what was then a distant outpost called Narita, now home to the region’s international airport. They set up a trading post and developed a reputation that made the Mitani name synonymous with fine silk kimonos. The family also invested in the container shipping industry.

With the Mitani family’s relative wealth and access to oceangoing ships, the prospect of crossing the Pacific was not an impossible dream. Nor was it a voyage toward indentured servitude, as it was for many Japanese at the time. Sakimoto’s maternal grandparents migrated to Los Angeles together, as entrepreneurs.

“To open a tailor shop,” he says. “Their idea was to make American-style clothing, suits, for the Japanese immigrants.”

The children of both the mom-and-pop tailors, and the Buddhist priest and his Japanese wife — including Sakimoto’s mother and father — were born in California in the 1910s.

Jimmy Sakimoto, born in 1915, worked in a grocery store as a young man. He was drafted into the Army sometime in his 20s, in the years before the United States entered World War II. Amy Mitani, born in 1917, was a clerk for the Los Angeles city schools.

Already in the military when the Japanese bombed Pearl Harbor, Jimmy Sakimoto had his weapons confiscated. “He was put on what he called permanent KP and truck driving,” Phil Sakimoto says. Amy Mitani and her family were among the 120,000 Japanese-Americans imprisoned in internment camps.

President Franklin D. Roosevelt’s executive order of February 19, 1942, led to the “evacuation” of people of Japanese ancestry from the West Coast. The Mitani family reported, as ordered, to the Santa Anita Racetrack and then were taken to the Amache internment camp in southeastern Colorado, where most remained for the duration of the war. They sacrificed their everyday lives and most of their possessions, along with their freedom, carrying one suitcase each to an indefinite detention.

Sakimoto’s mother never divulged much about the experience, saying things like, “It was wonderful, all our friends were there,” when she talked about it at all. “This is being very Japanese. You never admit to the reality,” Sakimoto says. “We have a whole Japanese-American community that’s just lived decades of repression.”

Lily Yuriko Nakai Havey was among the repressed. Havey was 10 years old when her internment began, more than a decade younger than Amy Mitani, but they followed the same path from Santa Anita to Amache. And they shared a reticent sensibility that their parents instilled.

“I internalized the principles of gaman and shikataganai,” Havey writes, “learning not to verbalize fears, frustration, and confusion.”

In 2014 she published Gasa Gasa Girl Goes to Camp, a memoir of her family’s internment. Havey gave herself permission, “at long last,” to express the emotions from the compulsory uprooting from home to a warren of barracks surrounded by razor wire, from the dread of regular police inspections of their family of four’s shared single room, from the indignity of late-night trips to the bathroom illuminated by sweeping floodlights. Every part of her life, of herself, seemed to vanish with the receding western horizon on the eastbound train.

“Physically, true, we had left our lives in Los Angeles, but this empty feeling emerged from a space deep inside my body,” Havey writes. “It welled up, spread like a chill, and infected my entire being. Except there was nothing there. Gone. The word was so empty and final: gone.”

Although Sakimoto’s mother offered little information about her internment, how she got out is a matter of public record. Jimmy Sakimoto came all the way from Mississippi to marry her.

A regiment of Japanese-American soldiers, which would go on to demonstrate historic valor, had been formed. They trained at Camp Shelby in Mississippi, preparing for deployment to Europe. Jimmy Sakimoto became a first sergeant.

“He tells me that it’s because he always made sure he kept his truck nicely polished,” Phil Sakimoto says, but the promotion was more likely because he was older and had more military experience than the raw recruits, many who had spent the early war years in internment camps.

There was dissent in the camps about fighting for the government that had ordered them from their homes and herded them into pens. They were victims of a racist decree from the commander-in-chief himself, but even if the president did not respect their citizenship over their ancestry, they were Americans.

“I think in the end, the Japanese ways, you respect and honor your superiors and your country,” Sakimoto says, “and America’s the only country they ever knew.”

Jimmy Sakimoto’s rank gave him the freedom to sign himself out of Camp Shelby, which he did one day in October 1942 with the intention of traveling to Colorado so he and Amy Mitani could marry before he went overseas.

Arriving at the Amache internment camp in uniform, he got a puzzled look from the guard at the gate, who wondered, “What are you doing out there? You’re supposed to be inside.”

Then, on closer inspection of Sakimoto’s uniform: “Wait a minute, you outrank me.” 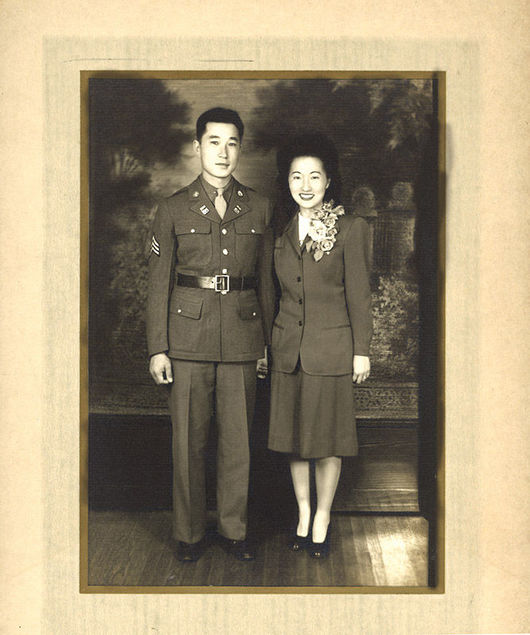 After some confusion and discussion, rank prevailed. A jeep was summoned to ferry 1st Sgt. Sakimoto to Amy Mitani’s barracks. The couple left the camp to be married and made their first home in Hattiesburg, Mississippi, where the bride lived out the war while her husband fought in Europe.

Jimmy Sakimoto led an antitank company, part of the legendary Japanese-American 442nd Infantry Regimental Combat Team. His company saw combat in Italy, firing on enemy tanks that lobbed artillery in return and flying gliders in the August 1944 invasion to liberate southern France. As a utility unit in the muddy, wooded Vosges Mountains near the French-German border, the company contributed to the 442nd regiment’s rescue of more than 200 soldiers of the “Lost Battalion” that had been surrounded by German forces. Three of the antitank company’s men were killed and 15 wounded in the Vosges.

By December 1944, the unit was scouting the French-Italian border. Two soldiers spotted what looked a huge fish in the bay. It turned out to be a one-man German submarine. The operator was captured, but not without a misunderstanding about which country’s soldiers had detained him. As a history of the antitank company recounts, “he could not be convinced that his captors were Americans of Japanese Ancestry.”

They had to prove that to their fellow Americans, too. Here’s some convincing information: A total of 14,000 mostly Japanese-American soldiers represented the 442nd, earning 9,486 Purple Hearts and 21 Medals of Honor. Based on its size and duration of service, the regiment was the most decorated in the history of American combat.

Jimmy Sakimoto and his Army buddies, “a bunch of uncles” Phil Sakimoto remembers from reunions, were as reticent with their war stories as his mother was about her internment. They did their duty and went home to rebuild lives uprooted by foreign aggression and domestic prejudice.

Based on an Army discharge aptitude test, Jimmy Sakimoto became an auto mechanic. Phil and his brother worked in their father’s garage, dirty rags flapping in their back pockets as they ran to meet arriving drivers to pump gas and check oil.

That’s the life Phil Sakimoto envisioned for himself until a trip with a friend to Pomona College in 1972 set him on a different path. A kindly admissions secretary fudged the application deadline for him, and when he enrolled, “I discovered the rest of the world,” Sakimoto says, to say nothing of the universe, which he studied as a physics major with a concentration in astrophysics.

Although he had excelled in high school, it was inadequate preparation for what was to come. In college he had to use his textbooks as more than a disguise for hot-rod magazines, but he got the hang of it.

After an astronomy graduate degree from UCLA and a stint teaching, Sakimoto went on to manage NASA’s education programs. For more than a decade, he’s been at Notre Dame helping students who are struggling, like he once did, to adjust to college-level work.

Here, Sakimoto found Catholicism, which he says opened his mind and heart to the importance of a more honest emotional reckoning with the events in his family’s history.

And he still has his mind on the cosmos. Sakimoto and Leonard DeLorenzo of the McGrath Institute for Church Life are preparing a planetarium program to serve as the introduction to the Vatican’s pavilion at this summer’s Expo 2017, the current incarnation of the World’s Fair, in Astana, Kazakhstan.

The broad strokes of Sakimoto’s journey sound like that of many Baby Boomers. He’s the child of a World War II veteran who benefitted from his parents’ sacrifices to build a life beyond the previous generation’s boundaries.

The darker shadows of his family’s story are the reason Sakimoto had reservations about sharing it, but his own path led him to believe in the necessity of shedding light.

Jason Kelly is an associate editor of this magazine; email jkelly30@nd.edu.