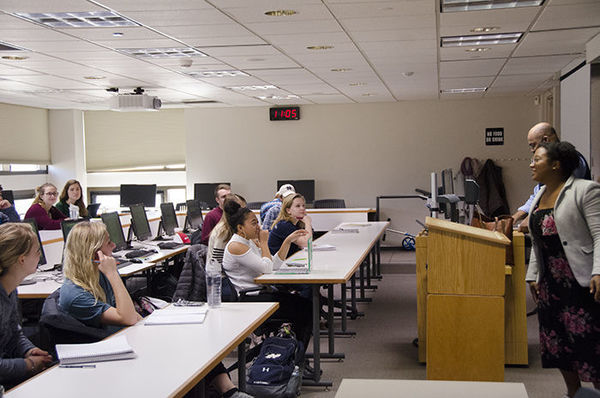 Jones in the classroom with his wife and co-teacher, Victoria St. Martin

When Rich Jones left The New York Times last year to work at Notre Dame, many of his colleagues asked the same question.

“What are you doing leaving Manhattan and going to Indiana?”

The query, Jones says, always made him think of Lou Holtz’s famous summary of our campus: If you’ve been there, no explanation is necessary. If you haven’t, none is adequate.

But, of course, some explanation is required. Notre Dame had an opening for the Annenberg directorship of the Gallivan Program in Journalism, Ethics and Democracy. Jones had a long history of teaching journalism in addition to his years as a reporter and editor, and, as “a Catholic kid from north Philadelphia,” he’d always admired Notre Dame. But he never thought he’d end up here.

“I don’t want to get too cosmic,” he says, but, to borrow another phrase often heard around campus, sometimes you just feel called.

Jones’ resume is impressive. He’s logged more than a decade at the Times and nearly as long at the Philadelphia Inquirer, writing about everything from criminal justice to the New York Jets, and he’s taught at a half-dozen universities. Over the years, he has often found himself at schools known for their journalism programs — Columbia as a graduate student, New York University as an instructor — but he likes the dynamics of a smaller journalism minor program like Notre Dame’s.

“There’s something special about teaching journalism in this context as part of the liberal arts tradition,” he says. “I mean, journalism is a liberal art, right?”

In fact, that Holy Cross focus on educating the mind and heart has led to the occasional scheduling problem for journalism minors.

“Our students can go toe-to-toe with anybody in the country, but our students may not have those big internships” that are common at traditional J-schools, he says. “Part of that is because they’re all renaissance people. They go off on service trips. They go to cure diseases for spring break and solve famines.”

Certainly not a bad trend, but one Jones hopes to tweak to help students compete in the competitive journalism job market. Students in the minor program sometimes understand “service” in a conventional way, he says, but “journalism is a form of service as well.”

A handful of students will see the social justice side of their profession firsthand this spring, thanks to Jones’ new “Covering America” course. The class will travel to Houston to report on communities damaged by Hurricane Harvey. 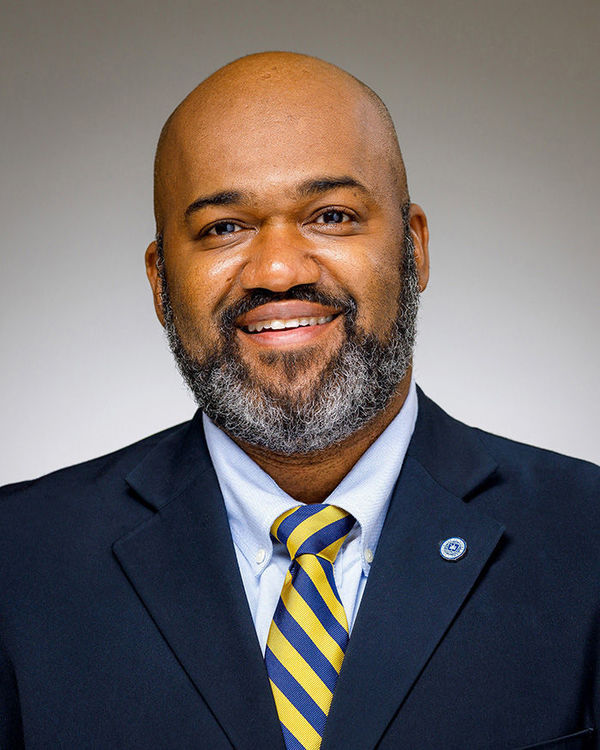 “This is a course that deals with, ‘How do we cover stories with professionalism, but also empathy and compassion — when writing about trauma, when writing large-scale national stories, [when covering] disasters?’ That’s something I hope our students will be able to bring with them into their careers.”

“Covering America” is among several initiatives Jones has introduced to the program. In another new course, “The Digital Newsroom” — which Jones co-teaches with his wife, Washington Post alum Victoria St. Martin — students spend half their time in the classroom learning about online journalism and the rest applying their new skills in work for The Observer. A number of working journalists have also been added to the program’s roster of visiting instructors and guest speakers.

All of these developments aim to prepare Notre Dame’s journalism students for a profession in which the stakes are higher today than ever before.

“A lot of times, students still leave a university and they’ll walk into an entry-level job,” Jones says, “where you’re handed the keys to the Twitter account, handed the keys to the Facebook account, and you have to make a call, often on your own: Do I post this alert? Do I send this push notification? So [students need] both the journalistic foundation — the technical skills to tell stories — and also the ethical judgment and decision-making skills to put it all together. We want to make sure our students leave here with all of these skills.”

Combine Notre Dame’s penchant for educating the heart and mind with JED’s increasing commitment to internship placement and multimedia training, and the students under Jones’ care might suddenly look just as appealing to recruiters as any J-school grad.

“I think our students have a reputation for the intellect, the ethical piece, just — they’re workers,” Jones says. “But we want to get to a place in the next two or three years where we have students who are competitive — when their resume comes across the committee at The New York Times and the Washington Post, it’s, ‘Oh, wow.’”

After all, Jones says, Notre Dame shares an important characteristic with a paper like the Times. “It’s important to me to work at a place that’s mission-driven,” Jones says. Employees and fans of the Times believe deeply in the mission of their institution, he adds, much like the members of the Notre Dame family.

So Jones’ move to South Bend may have meant trading Central Park for South Quad and the Big Apple for the Rust Belt — but, on the things that matter to Rich Jones, New York and Notre Dame may not be so different after all.