I came away from a conversation with Ted Barron, the new executive director of Notre Dame’s DeBartolo Performing Arts Center, thinking his job is sort of like being a fortune teller. Not in a crystal-ball or palm-reading kind of way. It’s 2016. Even soothsaying is a data-intensive endeavor these days.

On the July afternoon when we spoke, DeBartolo’s 2016-17 marquee schedule of music, theater and dance performances had not yet been announced, but Barron already had an eye trained on the 2017-18 season. In the Venn diagram of demographics to which an arts organization must target its shows, the sweet spot where the audience categories overlap can be small. What students like might not appeal to young families or to the older members of the community who have become loyal patrons over the years. 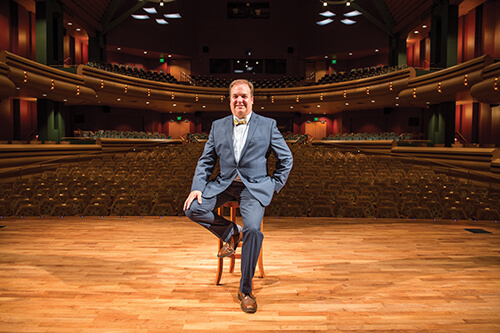 There’s also “the academy.” Although he’s a film guy — Barron ran DeBartolo’s cinema programming for the past six years — he’s not referring to the Oscars. He’s talking about the educational component of the performing arts.

A staff of 23 helps him navigate these sometimes-complementary, often-conflicting influences. In addition, to help align DeBartolo’s programming with both academic priorities and the interests of younger audiences, Barron consults with advisory groups made up of faculty and students with specialized knowledge.

“How much can we draw from the interests and strengths of people who’ve actually committed themselves to the arts?” he says. “Not simply somebody who is a casual fan, but somebody who studies these forms and is interested really in the best quality of presentation.”

Some of that groundwork has been laid by his predecessor, Anna Thompson, who planned the current season before leaving last fall to become executive director of the Alys Stephens Center at the University of Alabama-Birmingham. Barron points to the upcoming October 14 performance of the a capella group Vocalosity as a departure from DeBartolo’s typical classical, jazz and chamber music lineup.

“Here we have something that has a notable pop flavor to it, that I think speaks to not only the kind of music that students are listening to, but they’re actually performing themselves,” he says. “This is becoming an increasingly popular activity.”

Attracting students is a particular challenge. Many are introduced to DeBartolo’s offerings — which also include films, live screenings of world-class opera and theater performances, and numerous student productions — through a class requirement. If a professor makes attending a performance mandatory, Barron says, “Maybe 10 percent or 20 percent of that group is going to be transformed by this. See that there is this incredible resource that they have access to, that people don’t have access to at other universities and that can really make a difference in their lives.”

The vast majority, by that math, remain unmoved to return on their own. Among Barron’s priorities is changing the calculus. Convening a student advisory group was one step in the process, but he wants more than simply their input. “We’d like to find a way to provide them with resources so they could actually program an artist themselves,” Barron says. “Then they would have a sense of ownership.”

As it stands, fewer students than he would like feel the sense of welcoming and comfort at DeBartolo associated with the idea of “ownership.” Feedback suggests that presumed barriers like cost are not to blame. More basic concerns keep them from attending more often.

“When should you applaud during a music performance,” Barron says, offering an example of a common response from students reluctant to explore, say, classical or jazz. That reflects a larger issue in drawing audiences to the arts: accessibility, in every sense of the term, from ticket prices to an impression of the arts as elitist.

Even geography has worked against DeBartolo. At the south edge of campus, the building once felt removed from the core campus activity. As we talked, construction equipment growled and beeped outside Barron’s office window — not great for everyday staff parking but heralding more foot traffic in the future. Both Jenkins and Nanovic Halls, just across Holy Cross Drive, and the Campus Crossroads Project at Notre Dame Stadium will tilt the campus center of gravity in DeBartolo’s direction.

As for the center’s accessibility to the South Bend community, a question still arises regularly: “Is it open to the public?” The inquiry jolts Barron, given Notre Dame’s efforts to open DeBartolo’s doors to any and all. “Of course it is,” he responds. “We want you to come and come back and come back.”

Perhaps the greatest obstacle for an arts administrator trying to peer through the fog of data to schedule a popular and enlightening lineup involves a different kind of accessibility: People have access to a lot of entertainment without ever leaving their couch. Competing with that means providing something beyond the performance itself to stimulate attendance.

“We’ve been working hard to create events around our events — after parties, post-performance discussions,” Barron says. “They range from the more academic to pure entertainment.”

A Halloween party planned after a theater performance of Dracula brought a crowd dressed in costume. DeBartolo has scheduled audience karaoke to follow the Vocalosity concert.

Those offerings, he says, allow audiences “to celebrate and engage with our performers in a deeper way than just simply coming into a venue and watching an event and then going off somewhere else.”

For all the considerations that determine a season, Barron thinks DeBartolo, first and foremost, should be fun. That means different things to different people, which involves incorporating a wide range of definitions with the ultimate goal of maximizing a diverse audience’s enjoyment.

As complex as that process can be, it serves a purpose Barron sums up simply: “We want people to have a really great time.”