Professor Peter Holland welcomes me into his office littered with literature and Shakespeare knickknacks, ready to chat with me for the magazine’s “Having coffee with” series. Alas, he’s already had his morning coffee and I’m on a caffeine retreat, so we have water.

“Water with Peter Holland” sounds pretty dull, we joke, and seems to suggest we’re constructing an environmental piece when in fact we’re here to talk about Shakespeare and America and how students think professors are aliens.

I’m late, I must mention, but I bring along a peace offering — a Notre Dame gnome. I remember from my Shakespeare and Film class with Peter (who insists I call him that instead of my comfortable Professor Holland) and our discussion of the animated tale Gnomeo & Juliet that he has a typically British fascination with gnomes. Unfortunately, his American wife and fellow English professor, Romana Huk, refuses to let him purchase such a tacky thing. Loophole: I bought it. 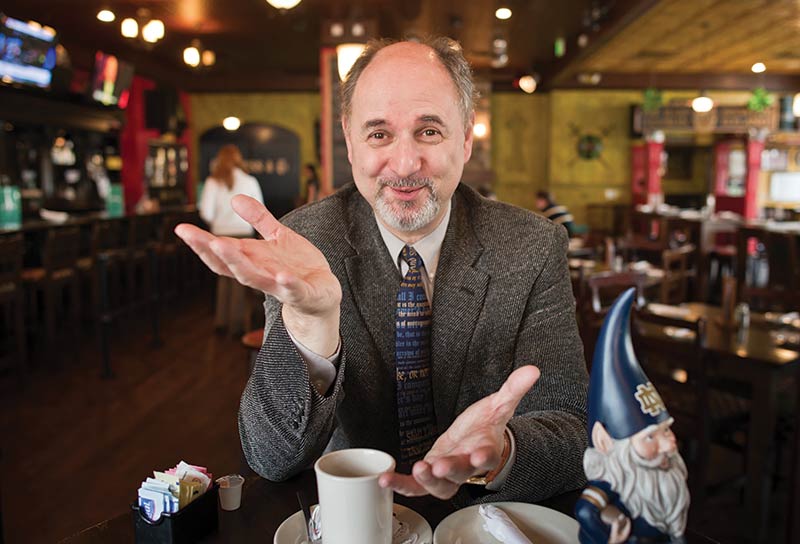 Gnomes aren’t the only thing lost in translation for this Brit stuck in the middle of Indiana. Bowties, the names of the 50 states and why people enjoy going to the gym are a few others. More sincerely though, he feels his relationship with his students is much different than what he had at Cambridge. There, he had students in class several times during their tenure, he’d see them around campus, he’d get to know them both academically and personally, and gradually they’d become friends. Often after class they’d continue talking over a pint or two.

“I suppose it’s a step beyond the old traditions of ‘Let’s pour a glass of sherry,’ which nobody does anymore,” he says. “Thank God, horrible drink.”

But America, he insists, is still caught up in the wake of prohibition.

“America is deeply anxious about alcohol and continues to worry, whereas we just grow up with it as a normal part of our world,” he explains. “It’s the whole thing of a pub is not a bar, a pub is a place you go and have a drink and can sit for two hours over one drink talking and nobody says, ‘Hey, you’re not buying.’”

Even aside from bar culture, Holland says students here rarely ask him to meet socially. I counter and ask if he believes many professors at Notre Dame would honestly want to spend their free time with students, even if a pint was involved. Neither of us can answer for the others, but he insists he would, and so we agree to have a follow-up interview in a pub.

He continues on the social awkwardness between professors and students, insisting that ND students have this delusion that their teachers are not real people but are instead some odd species.

“Hey, we have other things that we do. It’s like when you bump into a professor at Martin’s and you think, ‘They shop! Wow! They get laundry detergent. It’s amazing!’”

I ask him what, as a real person, he does on the weekends. He chuckles, as if realizing he’s about to violate his claim, and says his typical weekend involves mostly research.

And by research, he means theater and Shakespeare, things he didn’t study as a student but are instead pastimes since childhood.

His father, a Polish Jew escapee, and his mother, a daughter of Russian immigrants, ran a clothing shop in a blue-collar neighborhood, a profession they hated. In his contribution to the book Shakespeare and I (Continuum 2012), Holland reveals his parents were not well-off but the one thing they were willing to spend money and time on was live theater, a love that unintentionally inspired their son’s future work.

It’s a situation of passion inspiring work rather than work gradually becoming a passion, something that has made his job endlessly fascinating and fulfilling, which perhaps allows him to publish, edit and speak at the rate he does. He has just edited Shakespeare’s lesser-known Coriolanus, complete with 250 pages of commentary, for release this year as a part of the third Arden series, the Holy Grail of Shakespeare. He is also completing edits on the 18th and final volume of Great Shakespeareans, a collection of analyses on some of Shakespeare’s greatest critics, actors and scholars, also to be published this year. In the meantime, he is teaching, serving as associate dean of the College of Arts and Letters, and maintaining a busy speaking agenda that includes travels anywhere from L.A. to Seville to York to China.

Though he’s been at Notre Dame for 11 years now, Holland is still in awe of the opportunities he has, or, in his words, “Here, it’s the art of the possible. Everyone wants to make things go well.” Then again, he’s doling out many an opportunity, too. Since arriving, he’s amplified the presence of Shakespeare on this campus and helped expand the Notre Dame Shakespeare Festival. He has brought to his classes Actors from the London Stage, a director and executive producer from Three Days of Hamlet, and an actor from Anonymous. The 2011 film is a constructed account of the Shakespeare conspiracy theory, which claims someone other than William Shakespeare wrote the famed works — an argument Holland absolutely refutes.

His popular Shakespeare and Film class is taught in the Browning Cinema in the DeBar- tolo Performing Arts Center, a place he calls, “the biggest toy I’ve ever had.” The class features such films as Franco Zeffirelli’s traditional Romeo and Juliet and the American teen hit, 10 Things I Hate About You, surprisingly based on Shakespeare’s The Taming of the Shrew. 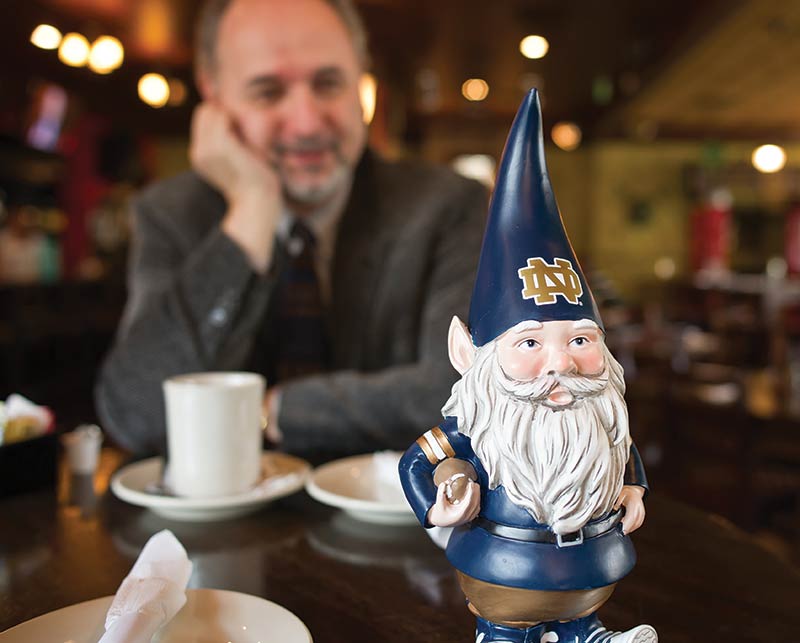 Appropriating Shakespeare’s works, more than 400 years old, for film, a relatively new medium, creates a fascinating blend and contrast of old and new, traditional and contemporary. But such is the value of Shakespeare, Holland says. Even centuries later, Shakespeare’s plays, either thematically, ethically or narratively, still resonate with people. We bring our lives, our social constructs, our ideas to Shakespeare, and that’s how we interpret it, he says.

“When people ask me, ‘Did Shakespeare mean that?’ well, that’s not an interesting question,” he says. “The real question is, ‘Do you want Shakespeare to mean that, and if so, why?’ What does your reading of Shakespeare say about you?”

He provides two examples of how that works. You can, for example, read Shakespeare’s plays as an adolescent and perceive them one way, then return 40 years later to find an entirely different narrative. For him, Romeo and Juliet was a lackluster love story as an adolescent, but 40 years later, as a father, he is now sympathetic to poor Lord Capulet, who can’t seem to control his daughter.

Shylock, a Jewish character in The Merchant of Venice, was used in Nazi Germany as an example of the cruelty and heartlessness of the Jewish people. By contrast, Holland says, Shylock is often interpreted in modern Shakespeare as a sympathetic character mistreated because of his race and caught in the grips of injustice. It’s the same play, but read two drastically different ways in two different cultural climates.

“Theatre is a moving target. There’s always something new,” Holland says, adding that this is truer for Shakespeare than any other playwright in history. But because Shakespeare is never the same, Shakespeare can never be fully understood. Even, Holland adds while smiling, by him.

His humility about his own studies and genuine glee as he talks about a poet long gone is refreshing, especially from such a respected and decorated academic. Just take a brief look at his previous students, four of whom are Oscar winners (Emma Thompson, Tilda Swinton, Rachel Weisz, Sam Mendes), or the program notes he writes for the Royal National Theatre in London (a former student is the art director), and you realize the man is not only a passionate researcher but an inspiring teacher.

An inspiring teacher who has settled in South Bend, Indiana, even though the best and brightest of the United Kingdom were filling his classrooms across the pond and access to Shakespearean plays and scholarship largely comes out of Europe. Even I have to raise an eyebrow and wonder why he isn’t positioned in London or Verona or even New York City. Academic freedom, he answers. He can teach what he wants to teach when he wants to teach it and no one says no or why. And so can his wife. And they can both do so with funding and support from the University.

Nearing the time in his life when he could settle into retirement, forgo his studies and return to England, Holland smiles and says, “I can’t begin to think of it.”

When I follow up a few weeks later over a pint, Holland insists the gnome is perched on a mantle at his home, where it is only temporarily allowed to reside.