Plush and varicolored in the rebounding light, the hawk grounded me with awe, though to the panicked squirrel leaping and spiraling from branch to branch in a rufous blur, the low-swooping predator must have seemed something like the warplane that Picasso implies in Guernica. Before its prey vanished into a tunnel in the snow, the hawk peeled abruptly upward and released what seemed to me a cry of pure being, Kreeee-are!

But what did the hawk mean?

Only Faust thought it possible to know every language. 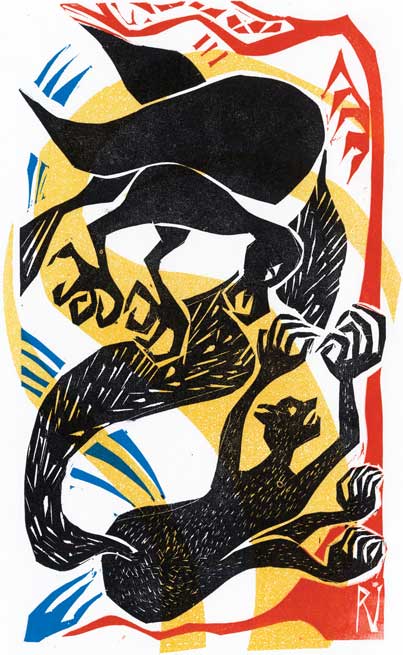 Several predawns after the day of the hawk, I oscillated between dreaming and wakefulness just as, in late March, the weather was inhaling winter and exhaling spring. I thought I heard surf climbing and breaking, but, though I tried, I couldn’t see the water or anything else. The strange half-dream gave me a vague and somewhat alarming sensation that the earth was without form and void, and darkness was upon the face of the deep. Eventually, I opened my eyes to a faint radiance of dawn on the formed and snowy yard beyond the low window near my bed. I wondered whether I had mistaken my sleepy rhythmic breathing for sounds of water.

That afternoon, I recalled a young American I met when last in Ireland. I had stayed three days at Corrymeela, a Christian peace-building community located on a grassy and flat strip of coast pinched by green slieves and chalky Antrim cliffs. During a group discussion about personal identity, she suddenly said, “God is silent. Why is God silent?”

I assumed she was alluding to the unabated injustice and violence of the human world: In the human silence of the room, as she awaited an answer, the place-names of Afghanistan and Zimbabwe came to my mind. And since we were in the North of Ireland, I was reminded of a magazine assignment that had taken me to Belfast during the Anglo-Irish war known as the Troubles. I recalled the sorrowful and minatory murals, sandbagged checkpoints, sundering and razor-wired “peace walls,” the men missing limbs — and the young boys, still in possession of both arms and both legs, gathering rubble to hurl at armored military vehicles on streets where bus signs alternately flashed Londonderry and Derry so that loyalists and republicans might both accept the riparian destination.

Yet it wasn’t God’s presumed silence on Afghanistan or Zimbabwe or even Ireland about which the young American was wondering. When no one tried to answer her question, she came close to tears and explained that her parents were divorcing, and again she waited for one of us to reply as we listened to the climbing and breaking of the surf out on the rubbled shoreline beyond the shrinking room.

Essays by Mark Phillips have appeared in Commonweal, Salon, The Sun, The New York Times Magazine and many other journals.