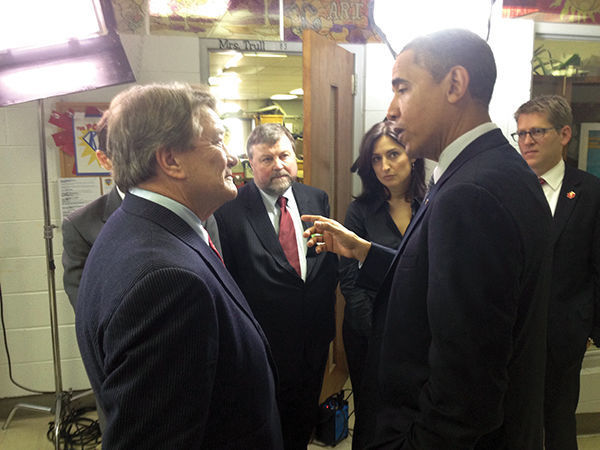 Frank Devine (center) worked with Steve Kroft at 60 Minutes before becoming a senior producer there. Photo by Aaron Tomlinson

As I enter Frank Devine’s office at 60 Minutes in New York City, what catches my eye is a picture on his bookshelf of him standing with Barack Obama, both of them wearing big coats and looking miserably cold.

“He was still senator and he was about to announce his candidacy that week,” says Devine ’75, a senior producer at CBS’ long-running newsmagazine. “It had to be like 15 degrees below zero. It was Super Bowl Sunday of 2007. It was brutal and we were miserable. We had been riding around the South Side of Chicago.”

Another picture shows a surprised Bill Clinton holding a terrified Hillary Clinton. Devine stands in front of them, a worried expression on his face. This one was taken during the taping of a famous 1992 interview, just before the New Hampshire primary, in which Bill Clinton had to respond to allegations of an affair. Marital infidelity and the potential upending of a presidential bid don’t explain the emotions captured in the photo, though: A set of lights perched over the couch where the Clintons were sitting had fallen and nearly hit them.

“Bill jumped up and held her and she thought she was going to die. I looked frightened because I thought that was the end of my career, although it was the local affiliate who had done the lighting for us,” Devine says. “What she ended up screaming was, ‘Jesus, Mary and Joseph!’ Somehow this Methodist from Illinois became my Irish grandmother as soon as it looked like we were about to kill her with this pipe loaded with lights.”

Despite this array of photographs with famous people, Devine says, “I’m a pretty boring guy.”

Hired as an associate producer by 60 Minutes correspondent Steve Kroft in 1989, Devine’s career has been anything but boring. He’s a senior producer now, with a hand in all aspects of story development. Before that, he worked directly with Kroft.

All 60 Minutes correspondents hire their own producers, and they work as a team. An associate producer does much of the in-depth research for an individual story, while a correspondent juggles several pieces at a time. When conducting the on-camera reporting and interviewing, the correspondent draws on the associate producer’s advance work. Now, as a senior producer, Devine sits in on screenings to offer feedback and helps manage the production and editing process for all 60 Minutes stories.

Before joining the newsmagazine, he spent eight years producing specialty broadcasts for CBS News Radio. A theology major at Notre Dame, he describes himself as a terrible student who spent too much time at WSND, the campus radio station.

“I knew from the minute that I walked into that radio studio at the top of O’Shaughnessy tower that this was what I wanted to do,” he says. “I liked the intimacy of the medium, the immediacy of it. I was doing both news, a nightly talk show and then Nocturne, the late-night, free-form rock show on various nights of the week. I was just enchanted by the whole thing.”

Devine now works in a comfortable ninth-floor office above New York’s 57th Street. Big windows flood the room with light and offer a view of the sparkling Hudson River. After nearly three decades at 60 Minutes, now in its 50th season, Devine can tell a multitude of memorable stories.

“The coverage that we did during the economic crisis was stuff I’m very proud of,” he says. “Non-picture stories, stories that don’t lend themselves to television. Explain synthetic derivatives, or synthetic CDOs. Those kinds of stories, where you’re looking at highly theoretical material and finding a way to explain it to your audience.

“But you can never talk down to an audience, you’ve got to treat them as though they’re just as interested in it as you are, it’s just that you’re a few weeks ahead of them in learning the material.”

Devine covered Obama for 10 years, from his first 60 Minutes interview as a senator to Obama’s exit interview at the end of his second White House term. He has interviewed Prince Charles and former president George H.W. Bush. The stories he likes best, though, are the ones about great characters, not necessarily famous people.

One of those characters was Rick Curry, a one-armed Jesuit brother, who, at the time 60 Minutes told his story, could not be considered for ordination as a priest because he lacked perfect symmetry. Curry started the National Theatre Workshop of the Handicapped in 1977 and eventually, after 40 years of being a brother, was ordained a priest.

“We found out the real story of Rick was Rick,” Devine says. “Then you had to kind of convince him that he was the story because, of course, he didn’t want to be the story. He wanted his organization to be the story. And we had to say, ‘We don’t do stories on organizations. But I’ll do a story on you, and your organization will be understood through you.’”

Since producer Don Hewitt created 60 Minutes in 1968, storytelling has been the show’s driving force.

“That’s the secret,” Devine says. “Don used to say, ‘Even the people who wrote the Bible knew that. That the problem was sin in the world, the topic was sin in the world. But the story was Noah.’ And we still follow that formula here. We don’t do stories on topics. We do stories about people and in doing that we illuminate the topic.”

Preparation for each of Devine’s reports includes a package of information that serves as his own form of Scripture: a “story bible” — a six- or seven-page, single-spaced magazine-style article that Devine writes after researching a segment.

The story bible liberates him from focusing too much on the interviews alone, expanding his view to incorporate what he uncovered during his shoe-leather reporting.

Once the material is compiled, sifting through it to determine what will appear on the broadcast is an intense process. He handed me script No. 8 of a story he worked on in Ireland. Sometimes he goes through as many as 15 scripts for a single 12-minute segment.

“Each of these is kind of a mini-movie as far as the amount of care that goes into it,” he says.

Making those mini-movies for the “Supreme Court of television” — an associate producer told me that once you make it to 60 Minutes, you’re there forever — has taken Devine to all 50 states, to France to cover nuclear power, to Cambodia to report on bird flu, and to the no-man’s land between Jordan and Iraq. Through it all, his role as a producer has allowed him to remain where he prefers: in the background.

“I often like to go into the room and have nobody know who I am,” he says. “They don’t know who that fat guy with the beard is in the corner. And I like that.”

Among Devine’s prized office snapshots are pictures of his wife and two daughters. Behind the door, a framed photo shows a younger Devine leaning up against a tree near Main Circle with the Notre Dame Law School in the background.

Since that picture was taken, Devine has canvassed the world “with freedom that’s rare in journalism,” looking for stories and returning with an almost childlike enthusiasm to share them. “Hey, look what I found out! I’m really excited about this, let me tell you what I’ve found out, what I’ve learned,” Devine says, describing the 60 Minutes philosophy. “And we get to do that.”

Selena Ponio is a senior in international economics and the Gallivan Program in Journalism, Ethics and Democracy. She interned last summer at 60 Minutes.