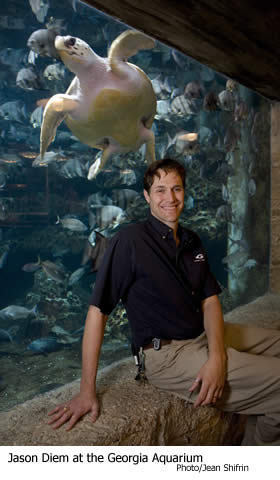 As Jason Diem ’92 roves the galleries of the Georgia Aquarium, the world’s largest fish tank, he passes by the orange sea nettles pulsating to mood music. He passes under the acrylic river, steeped in catfish, sturgeon and longnose gar. He passes by the spotted whale shark, the biggest fish on earth, plying the water with giant grouper, largetooth sawfish and hammerhead shark.

As the manager of guest programs at this mega-tourist attraction in downtown Atlanta, Diem is responsible for introducing visitors to the 120,000 creatures that live there. He and his 55 workers staff the exhibits, conduct behind-the-scene tours and roam the colossal ship-shaped building as they search for and respond to quizzical looks.

They also speak for the fishes. At the touch tanks, where visitors can paw horseshoe crabs and sea anemones, they make sure the creatures get treated with respect.

At every chance, they impart the aquarium’s central message: Many of our choices, from the food we eat to the fertilizer we use on our lawns, affect the health of the oceans.

“If guests could take away one thing, I would want it to be that oceans and aquatic systems are part of their life,” says Diem.

Sounds easy enough, given the aquatic life he has to work with. The $300 million aquarium houses creatures from the familiar brown shrimp to the exotic leafy sea dragon. In one section, as a wave crashes over their heads, visitors can see hundreds of tropical fish that work and play on a live coral reef.

Since its opening in November 2005, the Georgia Aquarium has attracted more than 3.3 million fish fans, a daily average of about 10,000 visitors. That’s kept Diem and his staff scrambling to keep their heads above water.

On a particularly packed day, Diem, a tall, lanky 36-year-old, moves through the aquarium like a shark, in constant motion and on high alert. Even his employee name tag identifies the shark as his favorite aquatic animal—one that he says “gets a bad rap.”

Diem is surveying the crush of humanity moving haphazardly into the five galleries when a visitor informs him that the ladies’ room needs paper towels. “This is the nonglamorous part of the job,” says Diem, who radios somebody somewhere in the 550,000-square-foot building. Diem’s day often will include assisting frantic moms separated from their offspring and shooing children off the fake rocks.

The perks of the job become evident in the Ocean Voyager gallery, where a giant window offers a glimpse of the aquarium’s superstars, a quartet of whale shark that fade in and out of view like apparitions. The Georgia Aquarium is the only fish tank outside Asia to exhibit the gray, polka-dotted creatures. As camera flashes illuminate the gallery, most visitors are delighted for the chance to see them.

One earnest young woman who is not so thrilled approaches Diem. She wants to know if the sharks’ growth will be stunted by living in captivity. The animals, the largest of which measures 22 feet long, could double in size.

Diem senses the tone—the one that holds attractions such as aquariums and zoos in disdain. He doesn’t get defensive but explains that the 6.2-million-gallon exhibit was designed specifically for the whale sharks. The visitor looks dubious but politely moves on.

“I respect everyone’s opinion,” Diem says. It is his opinion that aquariums and zoos offer the best shot at educating the masses and saving threatened species, including the whale shark, which is killed for food in some countries.

Diem shares this mindset with his wife, Lori Arkin-Diem, who is manager of public programs for Zoo Atlanta. The couple has two dogs, a parrot, two ferrets and a snake.

As a boy, Diem, who grew up in Granger, Indiana, just outside South Bend, had dreams of becoming a marine biologist. Through his jobs at a variety of zoos—including one as an undergraduate at South Bend’s Potawatomi Zoo—Diem saw the value in sharing his passion for animals with the public.

His graduate work at Ohio State University focused on how best to interpret nature for human beings. On this day, Diem does not think that is happening at the beluga whale exhibit. He cringes when he hears one of his staff use the world “cute” to describe the snow-white belugas to a group of visitors.

“I’m not saying they aren’t cute,” Diem explains. But he and his staff have only a brief time to tell visitors something they don’t already know while promoting the aquarium’s conservation message.

This is the perfect exhibit to do both. As mammals, the handful of belugas circling their exhibit effortlessly while making eye contact with the crowd already enjoy a connection that fish don’t have.

“All animals have their beauty,” Diem says. “Part of what I hope my staff can do is to point out the beauty in every animal.”

Ann Hardie ’82 is a staff writer for the Atlanta Journal-Constitution.