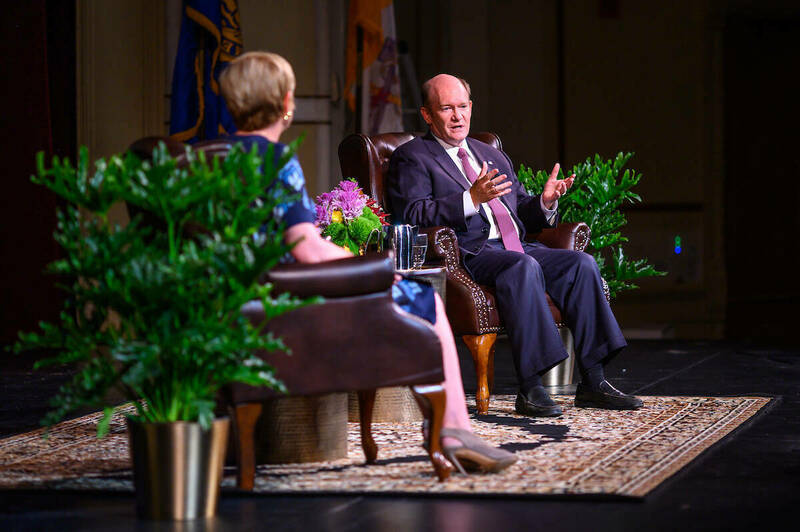 “My concern is it’s not moving as fast as we are seeing climate change accelerating,” Coons said of the bipartisan cooperation needed to address the issue. Photo by Matt Cashore ’94

If Americans hope to lead the way in addressing human-caused climate change that is fueling fires, floods, hurricanes and other disasters around the globe, it requires immediate bipartisan action, according to U.S. Senator Chris Coons.

"If you believe that we inhabit creation and that we are here as stewards and that we have a purpose and that a core part of that purpose is to be mindful of inequality and injustice . . . if you believe all of that, you can’t possibly ignore the crises that are ravaging our world,” said Coons, a Democrat from Delaware and co-chair of the bipartisan Senate Climate Solutions Caucus.

“We’ve had record heat waves. We’ve had record hurricanes. We’ve got record tornadoes. The federal government is spending hundreds of billions of dollars on responding to natural disasters, at an order of magnitude more than we did 10 or 20 years ago,” Coons said during a campus discussion Friday, September 10, hosted by NBC News’ chief environmental affairs correspondent Anne Thompson ’79.

The conversation in Washington Hall was titled “Call to Action: Crossing the Political Divide to Address Climate Challenges.” It was the first major event in this year’s Notre Dame Forum series, “Care for Our Common Home: Just Transition to a Sustainable Future.”

This year’s Forum focuses on environmental threats posed by climate change, as well as the economic, social and political disruption that it brings. Pope Francis wrote in his 2015 encyclical Laudato Si’: “We are faced not with two separate crises, one environmental and the other social, but rather with one complex crisis which is both social and environmental.”

Since then, the coronavirus pandemic has struck.

“We are living through the middle of three crises at the same moment: a global public health pandemic, a global refugee crisis and climate change,” Coons said. “And climate change, frankly — which is a reminder of how inequality is exacerbating the other two, and how our global interconnectedness is driving and fueling the other two — is at the root of so much suffering around the world.”

Climate change in the developing world is driving migration, poverty, loss of life and loss of opportunity, he said.

First elected to the Senate in 2010, Coons has made climate challenges one of his legislative priorities. In addition to founding and chairing the bipartisan Senate Climate Solutions Caucus with Senator Mike Braun, a Republican from Indiana, Coons has led several pieces of bipartisan legislation that would support energy efficiency and clean energy research, development and deployment.

Thompson asked Coons if the political will among elected leaders has altered regarding the need to take action. Coons said when he joined the Senate in 2010, there was a coalition of conservative Republicans in the chamber who insisted that climate change wasn’t real and that human activity didn’t contribute to the impact on the planet.

That attitude has largely changed, Coons said, and many Republicans now want to seek a market solution to the problem, an approach he agrees with — working with business, industry and governmental leaders. “If we can come to a common agenda that is bipartisan, then it’s sustainable,” he said.

“My concern is it’s not moving as fast as we are seeing climate change accelerating. So we frankly, I think, need to get busy,” he said.

The caucus has met with two dozen CEOs and every one of them has agreed that a price must be put on carbon emissions, Coons said. But there is some hesitation about the political price of such a move, he said.

“Not to put too fine a point on it, but our previous president (Donald Trump) argued forcefully that this is a hoax and we should not be doing it,” he said. “And so there is some concern about what the pushback might be in a primary or in the other party. At the end of the day, political will here is going to require a more forceful and engaged voice from the business community, the faith community and younger conservatives.”

On the day of the discussion, Notre Dame President the Rev. John I. Jenkins, CSC, ’76, ’78M.A., announced a goal of the University reaching carbon-neutral status by the year 2050.

When a monster storm tears through a region, it’s people who live in trailer parks who are most likely to lose their homes and their lives, not those who live in brick houses in upper-middle class neighborhoods, Coons said.

“The reality is climate change impacts people in uneven ways — just as the pandemic does, just as migration does. If we are to look at it from a moral perspective, we have to look at ways in which some of us have benefited unevenly from the economic prosperity of the last century,” he said.

There are as many refugees in the world today as there were at the end of World War II, when large parts of Europe, Asia and Africa had been decimated, Coons said. The number of refugees is climbing as people are forced out of marginal lands made unproductive by changes in climate, he said.

On September 7, the world’s top Christian leaders — Pope Francis, Archbishop Justin Welby of the Anglican Communion and Ecumenical Patriarch Bartholomew I, spiritual leader of Orthodox Christians — issued a joint appeal for delegates at the upcoming United Nations’ climate summit in Glasgow, Scotland, to “listen to the cry of the Earth” and make sacrifices to save the planet. “We must decide what kind of world we want to leave to future generations,” they said in their first-ever joint statement.

Coons’ son, Jack, is a Notre Dame senior. The senator urged students to learn about, talk about and become engaged in the issue of climate change.

“At the end of the day we’re going to pay for this one way or the other,” Coons said. “And the best way to pay for it is to make some hard choices up front and to proactively invest in leaving our children and grandchildren a cleaner and more sustainable world.”

A schedule of future ND Forum events is available here.