Sounds like destinations on a train line. But for TV writer/producer Linda Gase ’86, they were all the places she had lived from the age of 5 until entering Notre Dame. Because her dad was transferred approximately every two years, so many towns she had called home, like TV shows, were suddenly canceled.

For this reason, it was actual TV shows, along with movies, that provided companionship while she’d wait to form new friendships. Her particular small-screen favorites were The Mary Tyler Moore Show, Laverne & Shirley and Charlie’s Angels. “Working women finding their own paths,” she assesses. 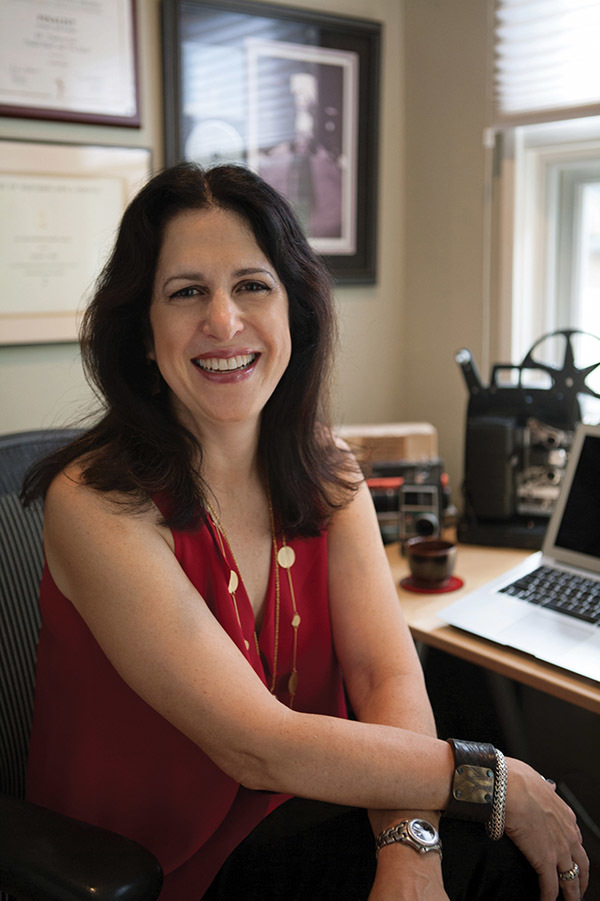 Despite offering Gase solace growing up, entertainment wasn’t on her mind when she became an English major at Notre Dame. All those early moves made her long for a career path of order — and it doesn’t get much more orderly than the law. “I liked the idea that you go to law school, pass the bar, and then you join a firm and possibly work your way up to partner,” she says. “I could see that, and it was comforting.”

But it didn’t mean that South Bend didn’t give her insight into the written word. “Professor Marullo taught Russian literature, and he was a professor who really focused on my writing,” she says. “He pushed it and my critical thinking to a new level — he made you break your writing down and then build it back up.”

Still, she enrolled at law school at the University of Southern California. It took all of one year before reality set in. “I heard too many people say, ‘Well, you work long hours, but you drive a really nice car,’” she says. “It just didn’t work for me.”

Even if law school didn’t work out, the Hollywood location did. “I just somehow felt like I was at the right place at the right time,” she says of the choice she made in 1988 to stay in California. “I sent resumes everywhere.”

One place took a chance. Gase was hired to drive around a casting director working on a film project slated to be directed by Michael Cimino, who had helmed the 1978 Academy-Award winning film The Deer Hunter. Keeping her eyes and ears open, Gase tried to be a sponge. “He had some great success, and there were talented people who came with it,” she says.

The picture was never made, and her Hollywood hopes stalled. Fortunately in 1992 she became an assistant on L.A. Law, perhaps a cosmic wink at her earlier legal aspirations. Even better, when Gase was named associate director of the Humanitas Prize, an award given to film and TV writers whose shows celebrate human dignity, she was exposed to a variety of strong scripts.

Armed with a better sense of good TV writing, she picked up a gig spinning stories for Tales & Tunes, part of the children’s live-action home video company.

Maybe not her ultimate goal but it was a start — and important enough to her that she turned down a research job offer in 1994 from a network TV show about to air.

She was lucky they came back to offer it again a year later, because that show Gase had turned down was none other than ER.

“For the next two years it was like my film school,” she says. “As a researcher in on every writer’s room session, I was listening to some of the best writers when it came to creating story. When they turned to medicine, I was there. I would get in an ambulance for ride-alongs, go to the hospital for a week, trying to find the best stories.”

In 1997, she did something she says “you’re not supposed to do.” Gase wrote an ER script. “I had to come up with something original, and found I could talk to four different doctors and sometimes get four different answers,” she says. Gase drafted a story based on that experience and gave it to Carol Flint, a mentor on the show. A few days later, Flint told Gase, “‘This would make a great Christmas episode.’”

Gase was given a shot at a second script, which led to a coveted staff writer position.

“It was a very supportive world to be in, and I felt so lucky,” she says. “One of the things I love about writing for television is it’s collaborative. You don’t have to just struggle in your brain but can go into the office and talk it out.”

Then it was time to add a specific hyphen to her career. In 2000, the police show The District, starring Craig T. Nelson, allowed Gase to get her first producer credit on network. Producing credits can be a reflection of where you are in your TV writing career, she says, but you’re still in the writing room — exactly the place she enjoyed.

The District also provided her with a chance to help pen one of the most satisfying episodes she was ever a part of. “I co-wrote one with John Wirth that wasn’t long after 9/11,” she says. It begins with a uniformed officer killed at the top of episode, then, “we play it back to first waking up in the morning, intercutting with a funeral that’s in tribute to him. It was our way of honoring the service people who give their lives for us.”

It was her next show as a producer that was ultimately a better fit. “Crossing Jordan had strong female characters, and the story wasn’t so much about procedure,” she says. “It had more character development.”

Stops at Blue Bloods and Army Wives would follow, but the drama Switched at Birth, her present show, was her first time as executive producer. Brought on originally as a co-executive producer in 2013, now it was Gase running the writers’ room, keeping the series fresh and on track.

“I got to join a Peabody award-winning show, and it was the first show I’ve done that was 100 percent nonprocedural,” she says. “One of the most satisfying things was the feedback from teenage girls tweeting that Switched at Birth was the only show where they have to put the phone down to watch it because some scenes only have captions.”

Gase loves the balance of taking in the team’s ideas while thinking up her own. Jeffrey Melvoin, a fellow producer during Gase’s Army Wives stop, admires that approach. “As a producer, she’s learned from the bottom up, is cool under pressure and can always be relied upon to be the adult in the room.”

Though Gase enjoys having a higher level of responsibility, she realizes her position is also a chance to remember those starting out. “I felt very lucky along the way,” she says, and today she sees people on her staff who remind her of the days on ER when she was looking for a break. “I hope part of any work experience is about looking for opportunities to give back.”

She would also like an opportunity to have her own show on the air. “And the great thing is that it’s a super exciting time to be on TV. We have emerging new platforms, nontraditional cable channels, and you feel lucky right in this moment, this age of TV. It’s like the way I felt when I left law school — that I’m at the right place at the right time.”

Eric Butterman has profiled Regis Philbin ’53, Margaret Ruffing Morris ’98 and others for this magazine. Contact him at ericbutterman@yahoo.com.