Kate Borkowski ’03 says she’s been told “my speaking voice sounds like a kid.” When she actually was a kid, singing around the house, her parents would advise her: “Belt it out!”

The singer-songwriter will have none of that. “American Idol promotes loud singing and volume,” she says from her Seattle home. “I think subtleness — what I try to capture — is really downplayed.”

Although she doesn’t trash American Idol, Borkowski is no fan of its pop music. She’s also afraid that those seeking a future in the music business may buy into the myth of instant fame and fortune the talent show seems to offer — and that only a limited number of contestants have realized.

“Finding out the whole structure of the industry can be a bad surprise if people do think it’s a fairy tale,” she says. 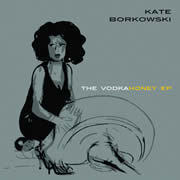 The hard-working Borkowski is no idle dreamer. When her extended play The Vodka Honey CD was released in August the 30-year-old could finally celebrate the result of years of both planning and luck. “The more your planning and luck are entwined, the better,” she says.

Her planning has been prodigious. While her ethereal voice and haunting lyrics set her apart from the crowd, the smart business mind beneath her wild corkscrew hair has kept her music career on track.

That career officially started in 2004 when she decided to leave a paralegal job in New Orleans and live in Seattle. “It was just so beautiful,” she says of her choice to make the move. Seattle also was a good place to begin public performances in coffee shops, clubs and festivals, eventually playing at larger venues with a band.

That’s when her first bit of luck hit. In 2007, a “Seattle music enthusiast and philanthropist” underwrote the recording of four of her songs. Ben Smith, the drummer for Heart, and Keith Lowe, bassist for Fiona Apple, joined her on the demo.

“That was a great thing but didn’t turn out the way I wanted it to,” she says. “I felt far away from the songs.”

To truly get her career going, she says, “The missing piece for me was a quality recording. . . . You need the quality of what a major label would put out.” For that, she says, you must “surround yourself with the most professional production team that you can.”

When she began work in 2009 on the album Beautiful Little Fools, luck again provided just what she needed. Marcel van Limbeek, who works with Tori Amos, agreed to become Borkowski’s mix engineer.

She couldn’t be more thrilled. “That’s so insane that every piece of music now that I put out has been touched by this guy,” she says of Limbeek.

Smith, the Heart drummer who again joined Borkowski as a percussionist on several songs for her new CD, also sees Limbeek’s involvement as yet another high note for Borkowski. “I was very pleased to hear that Tori Amos’ production and engineering partners saw the potential in the music, and love what they’ve come up with together,” he says in an email.

“She’s taken a big step forward with this music,” he adds. “I hope people out there get the chance to hear it.”

They can now. The Vodka Honey EP, offering some songs from her as-yet unreleased Beautiful Little Fools album, is available on iTunes, and samples can be heard at her webpage.

A childhood fan of the Ink Spots and Simon & Garfunkel, Borkowski is pleased to be singing her own songs these days. “I grew up singing other people’s songs,” she says, as well as playing them on the viola and clarinet.

It was during her senior year at Notre Dame, where her father, John Borkowski, is a professor of psychology, that Kate began to focus on playing guitar and piano and writing her own music.

“A lot of music today doesn’t really resonate with me,” she says. “I like to write about what is true and what’s hard.”

Her lyrics can sometimes come across as bleak, an observation that brings a soft chuckle. “I love sunlight and babies’ feet,” she says, “but it’s hard things that cause me to write.” She might be outraged about a news report she sees on TV, for instance, and those “really, really raw feelings” can result in a freeform paragraph that may be the basis for a song. “I only write if I just feel like, oh, I have to get this feeling out.”

It’s not all melancholy. Borkowski recently made a video of her song “Siamroot” (an anagram of Tori Amos), playing the part of a James-Bond-style secret agent. “It was just fun,” she says.

Still, she remains focused on the music, and all the work that entails. “Alcohol and drugs and parties and being out until 4 — that’s definitely not my life,” she says. “I also don’t go shopping very much.”

That’s because a few years ago she looked at her musical career and thought: “Oh my gosh, this is going nowhere. And I didn’t like that feeling.” She heeded the wake-up call, and today she is indeed, going somewhere. She just hopes fans will go with her.