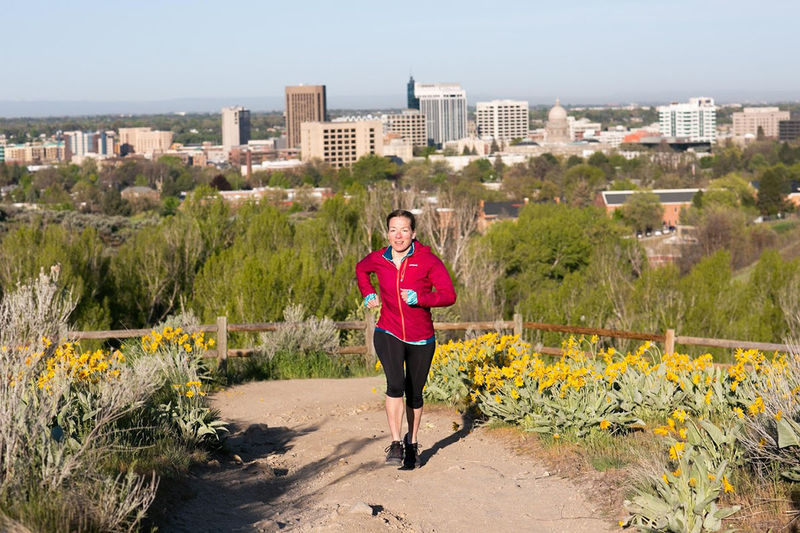 Boise mayor McLean on one of her regular morning runs

Editor's Note: In a December 2019 runoff election, city council member Lauren McLean ’97 defeated incumbent David Bieter to become the mayor of Boise, Idaho. In our autumn issue, she talks to Jerry Brady ’58 about her eventful first few months in office. There’s more from their conversation below with McLean reflecting on her campaign and how her time at Notre Dame shaped her approach to public service.

You defeated a four-term incumbent with 65 percent of the vote. What do you attribute that to? What did you hear? What did people hear from you, and how has that affected what you’re doing right now as mayor?

In the era of COVID, it’s so hard to even think back to an election that wasn’t all that long ago, but it feels like a lifetime ago. I set about to run for this office — how should I say this? I decided to run, but with some hesitancy, but I felt it was really important and necessary and time for this community to have a choice and a conversation about where we were headed as we grow. Also, I was noticing in our residents a deep desire to be heard and to be engaged and connected with in ways they hadn’t been. So, I set out to listen. And recognizing that, in my mind, one of the most important tenants of leadership is listening and understanding where people are and lining that up with one’s own vision of where we need to head and then getting there together.

I called it “Mayor Camp.”

. . . “Mayor Camp” at Harvard after you were elected, and you have other resources you call on. What are the big [takeaways] that you’re bringing in here from those sources?

I don’t know that the Kennedy School would like that I call it “Mayor Camp,” but it was a bootcamp, a training for newly-elected mayors. And I had a run-off. So, my final election as mayor was the night before the class started. I got up really early that morning, flew to Boston and just started learning. It provided me an entry into resources and academic relationships that I am bringing to bear for the city.

What do you think you took away from Notre Dame that plays out today?

The older I get, the more I realize that I took more than I ever knew. I was a Program of Liberal Studies student. And now, when I think back on that . . . from the beginning, I was being trained to think about the role of government in our lives and what it is to self-govern. . . . And really, that forever search for truth and progress is so much of what we explored as PLS students. Every now and then, I’ll find a paper that I wrote because I was cleaning out my garage, and I think, “Oh my goodness, I had no idea that I was thinking about all these things when I was a college student.” And here it is front and center in my life, and it’s really affected the way I view this role. . . .

I met Father Hesburgh as a freshman because his sister lived in the little village I lived in, in high school. He invited me up to his office snd he said, “You should look into this Hesburgh program of public service,” based on what he knew I was interested in. And I thought, “It looks interesting. OK, I’ll do it.” And it was that program that sent me to Montana as a fellow to be one of (Governor Marc Racicot’s) interns for the summer, and that led me here. So, in many ways, my experience at Notre Dame led me to the place that I am at now.

(Former South Bend mayor Pete Buttigieg) is teaching a course at Notre Dame on trust. If you were a guest lecturer for one class, what might you have to say?

Pete, ask me to be the guest lecturer for one class! That’d be so much fun. I would say . . . to build that trust, you have to be among people. And as an elected official, for me, it’s incredibly important. And it’s hard right now with COVID, it’s all Zoom, but incredibly important to step into the realm where I am in community, hear from people, be honest when I agree and disagree with them, and then move forward from there.

. . . My campaign was formed, in many ways, around listening sessions that I was having on a regular basis, and I have them now, just remotely. The first one I had is a city council person, not knowing that I was going to run, over 60 people showed up. It confirmed my sense that people want to be engaged. They want to know who their leaders are. They want to feel heard by their leaders. And then, when you have that, and you can establish that trust because they’ve been with you and you’ve been with them, then you make the decisions. But, at least, they’ll understand, in some ways, why or how you did it.

Do you still find time to run?

Most mornings, I’m out there. And if I don't make it in the morning, my team here knows I have to get out at some point. So, I get out for a run. For quite a while, I was averaging between 40 and 50 hours a week or miles a week — until the last, probably, six weeks or so have been a little bit more chaotic. I found myself a little less able to get up as early as I need to do to do that. But what it entails is — Boise’s an amazing place, nestled in between a river and beautiful open space foothills that other people would call “mountains.” We call them “hills” here. And I run the trails, and that’s where I go. . . . Sometimes, there’s water to run through, which is lovely. I look for wildlife when I can. And also, many people in Boise do the same thing, so it’s fun in the morning to be able to run by runners, bikers, hikers and say, “Hi.”

Interview by Jerry Brady, a former Democratic candidate for Idaho governor and publisher of the Idaho Falls Post Register. Their entire discussion can be heard on our podcast, The Endless Conversation, at magazine.nd.edu/podcast.