Nicolas was in tears. And I, his father and coach, needed to do something about it.

We were the worst team playing the best team in the last game of the season. Nicolas was the only kid on our team who could dribble the ball up the court. The team needed his spirits up. He was also my first born, a 9-year-old, little boy. I wanted him to be happy. 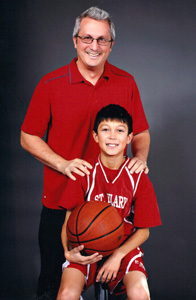 His tears brought me back to when he was born. Every time Joyce pushed, his heart rate dramatically dropped. The doctor told her to stop pushing, but Nicolas would not wait. I watched the monitor as his heart rate crashed. I was soon to be an Italian-American Catholic father — the type of father who is in charge, larger-than-life, and knows the right things to do and say at the right time. I never felt more helpless and small.

Nicolas was a mighty force. He was fighting to come out. Still today, he will not wait for the world to come to him. It is a quality I admire in him; a quality he has on the basketball court. Today, like every game, he was the smallest kid, with not the most God-given talent, on the court. But that did not stop him. He guarded the best kid, dove for every ball, dribbled through the defense, and slammed his body to get rebounds. He plays — and lives — with sheer will and determination.

“Nicolas, why are you crying?”

“None of my shots are going in. I keep making bad passes. They are creaming us.”

The nurses prepped Joyce for emergency surgery. I was ushered into the surgery room in full scrubs. They ripped Nicolas from his mother’s belly by his head with forceps. A medieval but effective method endured by both mother and child. After the doctors had scattered, nerves had calmed and we had returned to a quiet room, I sat holding this tough-as-nails, 5-pound-10-ounce boy. I was in awe of the strength of my wife, and the feisty spirit of my son and the miracle of life. The words came to me from the depth of my soul as I whispered to him, “I will always be here for you.”

I still have no idea what those words truly mean. Am I here to put food on the table and a roof over his head? Am I here to give wise advice about girls, cars and money?

During the time-out, I put my arm around Nicolas and the other kids. “Let’s get some water.”

What would my father have done? I scanned my memory, looking for an example from which I could draw some inspiration. He coached my teams, right? I tried to conjure memories of inspirational speeches or pearls of wisdom. I was drawing a blank. What did he say? I could not remember. I was on my own.

Everyone shook his head.

“Nic, can you have fun out there?”

The mist was clearing from his eyes. “Yes.” I gave him a hug. “OK, let’s have fun. Who cares if these guys cream you? Just enjoy yourself.”

I choked. I had a knot in my stomach. As a father and coach, I was called upon to lead, to inspire and to ease pain. I came up empty — an air ball rather than a shining moment as a coach and father. I let down my son, my fighter. He deserves better.

In the car, after another loss, Nicolas sat pensively. Finally, he spoke.

“Dad, I really like having you as my coach.”

“You’re great. And I like seeing you on the bench during games.”

At that moment, images of the games I played as a kid came flooding in. Hits I had, catches I made, goals I scored. In those images, I did not see my father on the sidelines or in the stands. I don’t remember a single word my father said to me at those games. Yet, I could feel his presence standing there, encouraging me. A warm feeling, like a blanket wrapped around me on a cold morning. I remember one soccer game. Battling a bigger, stronger, faster guy, I had a nasty collision trying to head the ball. I was dazed and lying on the field. When I came to, I saw my father standing over me — a looming presence with a smile on his face.

My father was there. I felt him. I feel him now. What he said did not matter at all.

In silence, I drove Nicolas home.

Peter Meringolo is a father, husband, lawyer, and writer in the San Francisco Bay Area. Email him at peter.p.meringolo@gmail.com..