A special edition of Notre Dame Magazine commemorating the life of Father Theodore Hesburgh, CSC, is now available through the magazine offices. 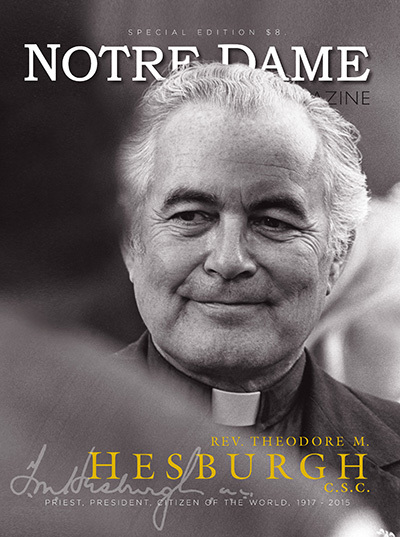 The 92-page issue was produced shortly after the Notre Dame president emeritus died in late February and has been mailed to the magazine’s reader list. Additional copies are available for $8 each (including postage and handling) by calling 574-631-5335 or emailing ndmag@nd.edu.

Many of our readers have asked for extra copies, for their friends and family and for themselves. We even heard from a man in the Midwest requesting an issue because he — not Catholic and with no connections to Notre Dame — had started reading it while waiting for his wife in a coffee shop. He wanted to read more about this priest but didn’t want to take the copy he had found there.

The commemorative edition includes eight pages of photographs and tributes from the memorial services following Father Hesburgh’s death as well as 88 pages of stories, pictures and quotes compiled by the magazine staff over the previous decade.

Printed on heavy, high-quality paper, the issue provides a comprehensive and definitive account of Father Hesburgh’s life with features written by his longtime chief communications officer, a colleague on the U.S. Civil Rights Commission, the former religion editor at Newsweek, a writer who covered higher education for The New York Times and a Notre Dame professor who chronicled the tirelessly resolute priest’s twilight years — as well as many shorter accounts and remembrances.

From the outset, the magazine’s editors sought not only to tell the Hesburgh story but also to produce a special edition that readers would keep for years to come, as a way of preserving an important piece of Notre Dame’s character and history.

The edition will be offered in this print issue only and will not be available online.