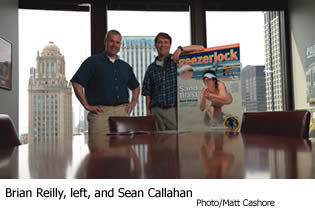 ESPN and sports pages across the country are replete with those conversational gems beloved by jocks, whose physical prowess doesn’t always translate to eloquent expression. “Sportswriters too often hear cliches,” says Sean Callahan ’87.

That wasn’t the case, Callahan found, when he and fellow feature writer Steve Boman began interviewing senior athletes for Chicago’s Daily Southtown. That’s “senior” as in 50-and-older, not “senior’ as in fourth-year high school or college student.

“We saw pretty quickly that there were some fascinating stories in a 50-and-over basketball league on Chicago’s South Side; men in their 60s traveling around the world to play volleyball; women who went to school before Title IX finding that they had hidden athletic talent,” he says. “We loved the stories and thought there was something there.”

The two talked about producing a book or documentary, but a willing investor soon turned their thoughts to a magazine. They printed a test issue in autumn 2004 and distributed it at the Huntsman World Senior Games in southern Utah. Following what turned out to be a successful introduction, the magazine was officially launched in spring 2005. Callahan’s Notre Dame classmate and friend, Brian Reilly ’87, joined the effort as publisher, overseeing sales efforts and circulation.

The subject matter hit an underserved group of athletes who have two things in common—a belief in physical fitness at any age and a self-deprecating sense of humor. The magazine, after all, is called GeezerJock.

“We thought of different names—Senior Fitness, Master Sports,” says Callahan. “Those just fell flat.” In their coverage of master sports events, he and Boman had heard athletes referring to themselves as geezer jocks, and they kept returning to that name.

“It has paid off, in terms of coverage,” says Callahan, with NBC Nightly News, The Wall Street Journal, the Chicago Tribune, CNBC and NPR all running stories on the outlandishly named magazine. It hasn’t always paid off in terms of reader happiness, however, as some reacted angrily to the geezer appellation. Still, says Callahan, “People see the magazine, and they definitely are intrigued.”

Intrigued enough that the publication has grown from 17,000 subscribers to 50,000. From four issues its first year, to six its second and eight this year, the founders plan to go monthly in 2008. They also are testing newsstand sales this autumn in the Chicago area. Advertising, says Callahan, doubled last year. Father Edward A. Malloy, CSC, former ND president, has been featured in the magazine, talking about playing basketball later in life.

Along with his work as editor of the print issue, Callahan contributes a blog and other stories to the magazine’s online version at geezerjock.com. Its audience may be seniors, but they are not technologically illiterate. And that version of the magazine is so hip that one of its more popular features was “the hip replacement diaries.”