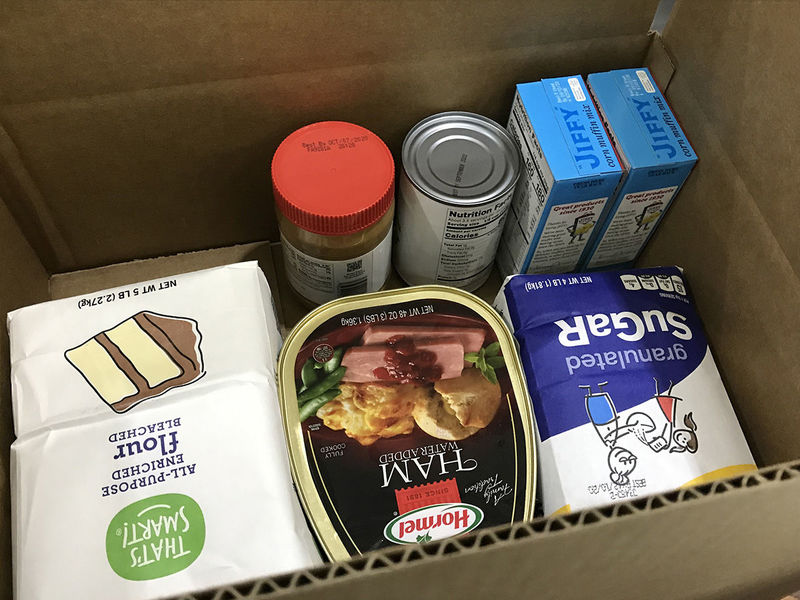 One by one, the food items are placed in sturdy cardboard boxes: bags of flour and sugar, cans of sweet corn, peanut butter, corn muffin mix, sweet potatoes and a canned ham.

Each container is carefully closed and sealed. Bagged fresh apples and potatoes will accompany each box.

The assembly line in the Joyce Center fieldhouse is a model of efficiency run by volunteers — mostly students and staff who have turned out for this annual Notre Dame tradition: preparing holiday food boxes that will be delivered and distributed to Pokégnek Bodéwadmik, the Pokagon Band of Potawatomi, headquartered in Dowagiac, Michigan. 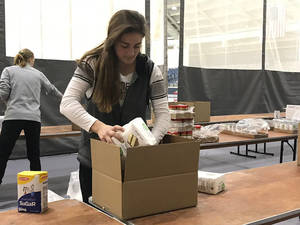 Notre Dame senior Samantha Lynch adds the bagged flour in one line. Freshman Henry Baer, a U.S. Navy ROTC member, seals the boxes and stacks them on a nearby pallet. 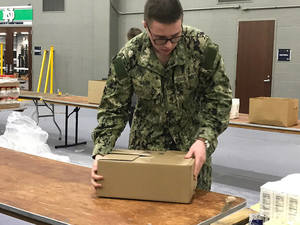 Many hands make the work go quickly. This year the bulk of the box preparation proceeded on December 4, with delivery scheduled for the next day. The volunteers spent several hours preparing the 720 food boxes, which were loaded into two delivery trucks.

The Pokagon Band has notified its tribal members in northern Indiana and southwestern Michigan, and families can sign up to receive the food boxes.

“This has been the quickest year,” says Cheryl Bauer, director of sourcing and sustainability for Notre Dame Campus Dining, which organizes the project. The fieldhouse provides the space to set up two long assembly lines. In past years, the process sometimes was spread over several days, with assembly in residence halls or other spaces on campus.

The annual holiday tradition is a gift of faith and friendship to the Pokagon Band. Notre Dame stands on land that was once home to the Potawatomi.

Some believe the food boxes are a tradition that dates back to the era of Father Edward Sorin, Notre Dame’s founder, when annual food baskets were distributed at Christmas time. Local Indians would come to campus to pick up food baskets from the Holy Cross priests, according to campus lore.

The tradition may relate in part to the Pokagons’ skills in handcrafting baskets, according to James Clifton’s 1984 book, The Pokagons, 1683-1938: Catholic Potawatomi Indians of the St. Joseph River Valley.

“Annually, through the mid-1930s, numbers of Catholic Potawatomi would arrive at Notre Dame bearing wagon-loads and Model T loads of varied basketwork. The retired Notre Dame official long responsible for managing the exchange remembers this event vividly as a significant encounter, beginning with the first meeting with the Potawatomi in 1921. ‘They would exchange baskets for food,’ he recalls, ‘never setting any trading value — they did  this to show they were not beggars.’ In these decades the Pokagons arrived at Notre Dame several times a year — Easter, Thanksgiving, and Christmas. Notre Dame, for its part in the relationship, would feed the visitors at their central kitchens and provide each family a basket of staples — some years serving up to 130. Often many of the Potawatomi would arrive festively dressed in traditional garb.

“Recalls the official, ‘In the 1920s it was strictly a trade deal. No one questioned the value of the baskets or the food. But of course, we gave more.’”

That was a pattern that didn’t endure past the 1930s, Clifton reports. As the number of elders with basket-making skills declined, the craft virtually died out. But the gift of food resumed at some point, at least by the 1970s, according to a 1980 article in The Observer about the annual food baskets.

Today, Notre Dame’s planning for the annual food gift begins in June, Bauer says. The University relies on its business relationships with vendors to buy the food items in bulk. “We use our purchasing power,” she says.

To procure the canned hams, Notre Dame approaches a producer directly. Canned hams are not as popular a food item as they used to be so they aren’t available in enormous numbers, Bauer explains. A direct relationship with a company allowed for purchase of 720 canned hams.

With the annual project, Notre Dame’s commitment to the descendants of the original inhabitants of the University’s land continues, says Joe Mulligan ‘59, a South Bend resident and project volunteer.

Gathering the volunteer workforce to produce the food boxes is not a challenge.

“It takes a few emails, then you get all these great people who show up,” says Giuseppe Macerata, executive chef at South Dining Hall, who has been helping with the food box preparation for years. “It reminds me of what a great place we work at.”