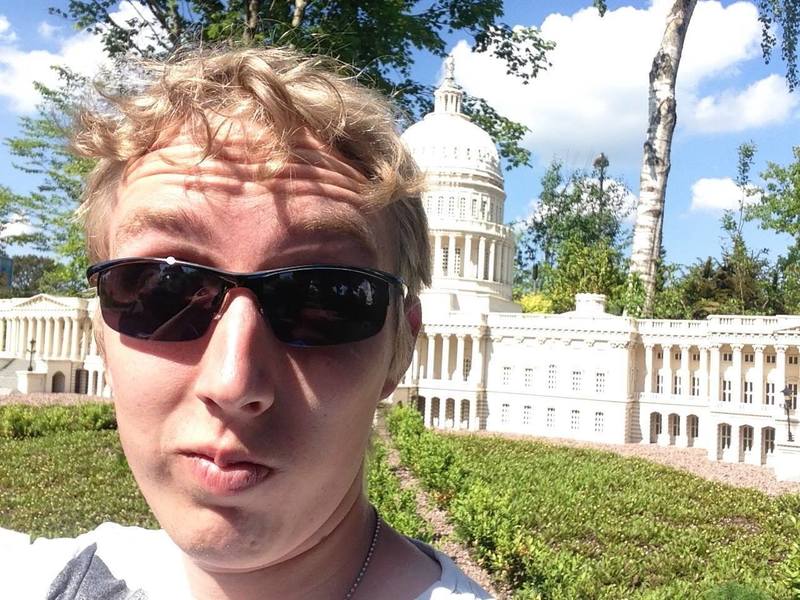 The United States, like the Lego version of one national landmark, stacks up pretty well in the author’s estimation.

I’ve been thinking about nationality and why it matters. I have two of them now, after all.

Borders are artificial, and I’ve long tried to have an international perspective; I did International Baccalaureate for high school, I interned abroad immediately after, I studied to be a foreign correspondent in college with students from all over the world and, at age 23, I bought a home 4,000 miles from where I grew up so I could live there with my foreign (to me) wife.

What I’ve learned is that my relation to a person has little to do with whether they were born inside the same borders as I. Shared values are more important, I think. We all have our tribes based on affinities and beliefs — religious, political, athletic. Things so powerful they can divide nations.

So why did I, a Danish-born immigrant, apply for and go through the expensive process to become a United States citizen? There are practical and emotional reasons. I’ll start with the emotional ones so as not to sound like I became an American just for a shorter line at the airport.

First of all, it feels safer. It’s not that there was ever much reason to think that I would get deported; I was always here legally and have done nothing to put that in jeopardy. I’m also a blond Scandinavian with connections in the media world, so I don’t kid myself that the anxiety I felt about being thrown out came close to the levels felt by many other immigrants. Still, every time I had to do something like apply for a green card, renew my green card, or go to the immigration office because the government was taking so long to extend my green card that it expired, I felt uneasy. What if I messed up? Would I have to upend my life?

But fear was not my primary motivator. My daughter was born a year ago and is, because of her parents, both Danish and American. America is where I met and married the love of my life. It’s also where people who didn’t know me gave me opportunities to begin my career in journalism. I have friends here, and most of my adult life has happened here.

Part of me pulled in the opposite direction. The U.S. has so much bad history, and more than enough issues in the present. The level of violence is absolutely insane compared to what I’m used to, and the political division is abhorrent. For all the talk of American exceptionalism, it’s easy to forget what’s so exceptional (yeah, I’ll speak freely, because that’s my right now).

But it is there. Even though it fails to deliver for many, the promise of this country is a great one. Human beings are made to be free, pursuing whatever happiness means to them.

There are practical, and perhaps even cynical, reasons as well. I no longer need to carry around documents proving that I’m here legally. I don’t mind shorter airport lines, if they exist. And being an American citizen actually means I am more likely to move to Denmark or some other country, because I now know that I can come back to the U.S. anytime I want without worrying about visas and green cards. I don’t feel great about those things being motivating factors, but hey, what’s more American than looking out for No. 1?

So I took the Oath of Allegiance on June 9 in Chicago, among 30 or so masked strangers with six feet between one another. No family or friends. The ceremony, which I paid good money to finally get to, took about as long as getting into the building and past security. I was nervous, I'll admit, because even though I practiced the oath, it’s wordy and hard to remember, and I wasn’t sure if I’d be able to do it. Turns out you just have to repeat the words of the person leading the ceremony.

I also knew I had the right to skip the words “So help me God” (I had heard something about separation of church and state; apparently that was false advertisement) but I had an irrational fear that someone would take offense or not know that I had that right. Actually, the fear was only so irrational, as I unintentionally created a stir on a Facebook group for Danes seeking naturalization when I asked about how to request that those words be waived.

But it was all fine. I said the words I meant and nothing more and, at the end, I was a citizen of the United States of America. What a feeling! I went back home and took the family to a South Bend Cubs game and had a chili cheese dog. It’s the American way.

I’m still Danish, though. Someone once said that you won’t find anyone who is as Norwegian as the Wisconsin Norwegians. Maybe that’s true. I’ve never felt as proud to be Danish as I have in these past few weeks.

Maybe that would have happened no matter what, but I think most Danes have felt that way recently. Christian Eriksen, the star of the Danish national team in soccer, fell to the ground and almost lost his life during Denmark’s first match at this year’s European Championship, in front of thousands of spectators in Copenhagen and millions of people around the world. The collective trauma, the heroic actions by teammates and medical staff to revive Eriksen, and the nation’s embrace of the team that has shown vulnerability and then played some of the best soccer of the tournament, leaves me with a strong sense of fellowship with all Danes that I don’t recall feeling before.

So I’m feeling more Danish than ever. As of June 9, I’m certifiably more American than ever. I do feel proud, and something happens to me when I hear “Courtesy of the Red, White and Blue.” For the record, I always thought that “The Star-Spangled Banner” was the most beautiful national anthem. I love liberty, football (notice I called the European game “soccer” above) and BBQs, and I passionately loathe Canada (OK, that’s actually over a minor conflict between them and Denmark, but still).

I’m trying to think of something wise to say about nationality, but I guess I still don’t think it’s the most important thing. I hope that doesn’t make me seem ungrateful, because I am grateful to this country. But there are other things that matter more.

Rasmus S. Jorgensen, a former intern at this magazine, is the local government reporter at The Elkhart Truth and dreams about being an urban planner, general manager of his favorite soccer team and Toby Ziegler from The West Wing.