What was the highlight of the September 26 presidential debate between Donald Trump and Hillary Clinton?

Was it when Donald said to Hillary, “I want you to be happy”? 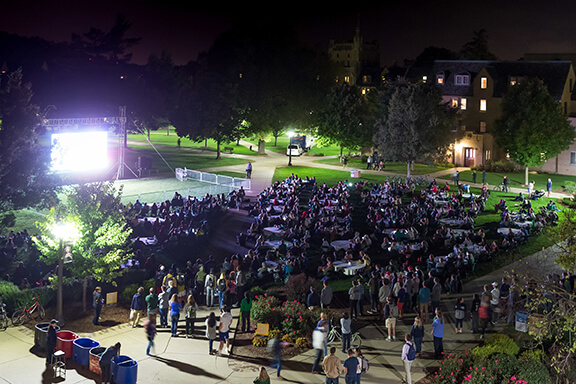 Or when Hillary said to Donald, “I know you live in your own reality”?

But even though the debate itself left me uninspired, something else lifted me up and gave me hope for the future of America: An estimated 1,500 students gathered on South Quad Monday night, a pretty cold one at that, to watch the debate together.

Don’t be fooled by the show of unity, though. It’s not that Notre Dame students aren’t opinionated. Unlike the audience at Hofstra University, the crowd on this campus made no agreement to be quiet during the debate — which, in fairness, might have grown so large because of the seven food trucks that were handing out delicious, free meals to the students.

I got a cheeseburger and both candidates got cheers and applause, although Clinton received the most and the loudest. Her opinions on equal pay and the unfair treatment of young, black males on city streets and in private prisons drew wide support from the South Quad crowd. On the other hand, many cheered Trump when he suggested releasing his tax returns only when Clinton releases her deleted emails.

For politically interested students, the night didn’t end with the debate. NDVotes, a non-partisan outreach of the Center for Social Concerns and the Rooney Center for the Study of American Democracy that promotes voter education, registration and mobilization, hosted a “Debate Debrief” in South Dining Hall. The event turned out to be the most honest version of a spin room that I have ever witnessed.

In fact, the representatives of the College Republicans and College Democrats both used big portions of their floor time reminding the audience of what their candidate did poorly.

“One of the things that Hillary maybe needs to work on — and this is coming from someone who is a big Bernie supporter — she doesn’t inspire people as much as Trump does,” said Sage Guynn, a sophomore.

Clinton did well on the issue of inner cities, Guynn said, when she “painted a picture” of a rich and hopeful culture. And when it came to explaining and understanding policies, Guynn believed his candidate shined.

Stevenson agreed, almost. “It seems to me that Donald Trump and Hillary Clinton have the exact opposite situations. All Trump seems to be able to do is inspire,” he said, whereas “Hillary can lay out all these very, very detailed policies, and then everyone is sitting there like ‘Ok, great, thanks.’ Somewhere in the middle there’s a great candidate.”

Christian McGrew from BridgeND, a nonpartisan student club that facilitates political discussion, reminded everyone that there are issues on which Clinton and Trump agree, such as aspects of gun control.

McGrew also caused the night’s biggest “Oh, I hadn’t thought of that” moment when he mentioned another surprise.

“As far as I was listening,” the sophomore said, “the wall wasn’t mentioned once.”

Was there a winner or even a memorable moment in the debate? I am not sure. But it seems to me a good thing that so many students, especially those who went to the late-night debrief, are making an effort to educate themselves on the major party candidates.

And though there were clearly people from both camps on South Quad, the manners on the grass were much better than those on the big screen.