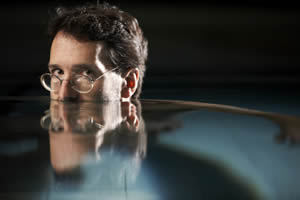 Brian died in May after a short but determined fight with brain cancer. He was for many years the editor of Portland magazine, the award-winning publication of the University of Portland — like Notre Dame an institution founded and staffed by priests of the Congregation of Holy Cross.

But Brian was not a priest. He was a proud Catholic layperson who gloried in his vocation as a husband and father of three, a son and brother, a friend of multitudes, an editor and writer, a coach and mentor to young people. And that is what he wrote about, mostly: the layperson’s life in the world of work, family and community. Yes, he wrote about the Church on occasion, often with great affection and respect, especially for women religious. One of my favorite essays of his is “Their Thin Bony Shoulders” in which he said of the sisters of Mount Angel Monastery in Oregon:

Look, I’m not an idiot all the time, and I know full well, all too well, that the story of the world is struggle and sadness, loneliness and loss; but to my mind there is just no way to stay sad as long as there are thin bony brave women like these nuns, like my mom, like your mom, in the world. It just cannot be done. We cannot let ourselves despair at the greed and cruelty of the world, and sometimes of our church, because these sisters do not despair, they fight the brambles all day and night for us, and they are lodestars and compasses and prisms and leaders of the world that will come, the world of joy and light, where no child weeps from fear, where no one huddles hopeless.

And he wrote about priests: parish priests and Jesuit priests and Holy Cross priests and other priests. As Brian would say with a lot of us laypeople, “Some of our best friends are priests.” But mostly he wrote about the rest of us: nurses and police officers and people in prison and teachers and librarians and other writers and kids (lots of kids) and even publishers. And it is as a member of this last group that I want to write about Brian.

I have been publishing books for Catholics (and others) for over 30 years, and so I have worked with literally hundreds of writers. Some of my writers (not all, and you know who you are) have been excellent, but none has been as much fun to work with as Brian Doyle. He made me laugh many times, but then he made me cry just as often to balance it off.

As I said, Brian wrote so much and so well and so intensely that publishers could not keep up with him. Just among Catholic publishers, he wrote for Ave Maria Press, Corby Books, Franciscan Communications, Liturgical Press, Loyola Press, Orbis Books, Paulist Press and my own ACTA Publications — not to mention for secular magazines and publishers all over the globe. Brian would explain simply that his three kids insisted on eating and that his wife concurred with them.

I don’t even remember how Brian made his way to me. It may have been through his friend and mine, Father Patrick Hannon, a Holy Cross priest who was the principal of my son’s high school in Chicago and whose trilogy of stories I published. When Brian sent me his proposal for a book of previously published essays, I couldn’t say yes fast enough. I don’t get a lot of rock stars coming to my small publishing house. But then began my education in how to work with him as a writer.

It’s not so much that Brian had an ego as a writer. He certainly did, but it was well-earned. No one could turn a phrase or pull on a heartstring the way he could. But my education came from dealing with him as a writer who had definite opinions about editing. I wasn’t used to that. Most of my authors are simply delighted to have a publisher, and they seem to want me to edit their books to make them “better.” Not Brian. Even though he was an editor himself for the articles he commissioned for his magazine, he didn’t have much use for editors. For Brian it was not enough for me to change something to make his writing “better.” I had to prove that it was, in fact, “better” and not just “different.”

So my first efforts with him were less than successful. I’d edit an essay and send it to him with the changes tracked on Word. He’d send it back to me with most of my “suggestions” deleted and restored to his original. Then I’d try to explain to him why I had suggested what I had, and here were some of the reasons he would not accept:

At one time later in our collaboration, when we had worked some of these issues out, Brian proposed a book of what he called “Proems,” by which he meant essays in which each line of type in the entire book had the same number of characters in it and ran one after another like in this paragraph so that the entire book would look like a block of lines which was kind of cool but really hard to follow so I insisted that once in a while we could put in a line break so that the reader might be better able to understand what Brian was talking about and like the book better and Brian agreed but then he later changed his mind and said no to the line breaks and so I never published the book but maybe someone else did or will in the future and I’m sorry now that I didn’t do it because it would have been a lot of fun and so what if we didn’t make a lot of money?

But eventually I found a way to work with Brian that we both liked. That involved the following steps:

So I’m going to miss Brian. The literary world will, too. Who else is going to write stories with titles like Like the Dew that Blesses the Grass, ‘The World Will Say You Are Silly! Be Proud of That,’ “The Long of Our Legs,” “My First Marriage,” What It’s Like to Be Hit by a Bullet, A Child Is Not a Furniture, Napper of the Year, and The Stories that Save Us ?

Maybe it will be you. If so, my only advice is to stand up to your editor and fight for your right to write the way you want. That is the only way we publishers publish anything new.

I’d like to end here so that the editors of this magazine will have enough room to print one of Brian’s best stories, the one about the kind of funeral he wanted to have and, I’m sure, did have, perhaps minus some of the details. It’s called “Rest in Piece”.

Greg Pierce is the president and publisher of ACTA Publications in Chicago, a past president of the National Center for the Laity, and the author of The World As It Should Be: Living Authentically in the Here-and-Now Kingdom of God and other books on the vocation of the laity in and to the world.