To chip a hole into that summer-baked soil required the thrusting of a digging bar, a repeated bending and straightening of my back, and when the iron tip struck a large stone and threw a spark and set my arm bones aflame, I nearly cursed my Uncle Fred for dying. The job was mine because two decades earlier, when Fred was a septuagenarian, he requested that — should his mortality ever be confirmed — his ashes be covered within hugging distance of where two of his brothers are nominally buried behind my home. 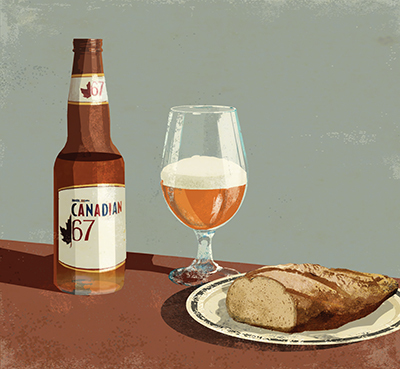 “Nominally” because nobody picked up my father’s ashes from the crematorium; and although my father’s brother Al had wanted his own ashes interred on my property, months after the burial ceremony Al’s daughter let me know that she had substituted wood ash and her dad’s real ashes were buried in her backyard. Two small gravestones mark the nominal resting places of two brothers, nonetheless. The grave for the third brother might be the real thing.

Fred didn’t want a formal funeral, but I doubt he would have objected to his down-home sendoff that was attended by his children, grandchildren, great-grandchildren, a niece and a nephew. Also several neighbors from the trailer park where he had resided until his move into an assisted living home. Present were none of the women from his four failed marriages, but only one was still living and she was in poor health. She did, though, mail the ashes of her and Fred’s cat to be buried together with his. Fred had named the cat Bad News.

In our final phone conversation, Fred told me he had almost married again, to a woman who lived on a different floor of the assisted living home. “I really, really liked this gal,” he said. “And she had a lot of money.” He had intended to travel to Niagara Falls with her and propose while out on the Maid of the Mist, the tour boat that churns to the feet of the cataracts. “I know this guy who is a pastor. Called him, and he was gonna be waiting for us when we got off the boat. Marry us right there on the dock.” Yet before Fred could carry out his plan, she died.

In the minutes before his ashes were buried, his daughter and a granddaughter spoke about Fred’s love of storytelling, women and life. His trailer park neighbors said he was loads of fun and would be missed. On many summer mornings they would rise to the sight of him already hoeing his garden, his neighbors reported, although by some nights he was so drunk they had to help him to his bed. “We had a lot of good times,” said one. “And some bad ones, too.”

Standing graveside and quiet for the time being, I was thankful for Fred’s decades of kindness to me, and for our good conversations and mutual laughter, but I also recalled a few strongly disapproving stories my father and uncle Al had told me about their brother. I wondered if anyone else still knows those stories. And how much did I really know about any of the other people present? And what of ourselves can any of us outlive? In the shade of a broad maple that was small when I placed on the hillside the gravestone of my father 40 years earlier, I looked upon faces and on each met a mystery framed by retreating trees and jagged horizon and ravenous ground.

My turn came. I spoke about an old and now abandoned Gaelic and English tradition of hiring a sin-eater to be present at the wake of a loved one who died with an endangered soul. After a chunk of bread and bowl of beer or wine were placed on the corpse, the sin-eater, normally someone desperate for a few coins, ate sacrificially of the offering, absorbing the sins of the dearly departed and thereby allowing the soul a possibility of heavenly immortality. With a can of beer in my right hand, I used my left to pull a torn piece of bread from my shirt pocket. I washed down the bread with Molson Canadian. “So, Fred, don’t worry,” I said. “I got you.”

Each of the adults who were standing before the hole had already downed a beer or two that afternoon, on a day that had been inevitable even for the last of my several uncles — who, before his heart gave out, had survived military service in World War II, a pair of bad car crashes, cancer, a stroke and enough whiskey to make mash of three livers — but later I worried I had caused offense by drinking to the possibility that Fred possessed character flaws and had accented my insensitivity by making sacrilege of sacrament. I considered that perhaps I should have remained altogether quiet. Or have added that a man might do wrong in part because — in the seeming immensity of living — he occasionally attempts to make sacrament of sacrilege. And that what a sin-eater actually means by wetting the bread is please forgive that man for his transgressions.

And me for mine.

Mark Phillips is author of the memoir My Father’s Cabin.