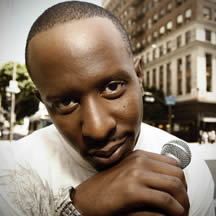 What am I doing here? Why don’t you ask me the meaning of life while you’re at it? I suppose it’s a fair question, though, considering no one really goes to Notre Dame to be a comedian. There is no Stand-Up Comedy major at ND. Imagine hearing a Domer at a dinner party in the classic navy blue blazer and khakis talking about, “And then I got my B.S. in BS.” Truth be told, I don’t know what I’m doing here, but I always knew I’d be here.

I knew I was going to be a comedian at 9 years old when I saw Eddie Murphy’s Delirious for the first time over at Mrs. King’s house. I didn’t get to see the whole special because of his language, but I only needed to see a little bit to know what I was going to be doing the rest of my life. Growing up in Prince George’s County, Maryland, I kept my newly found revelation to myself because I didn’t want anybody crushing it. Comedy was and still is very personal to me.

When my grandmother was alive we spent every holiday in Asbury Park, New Jersey, and that Christmas, when all of my cousins were going around the “little kid table” saying what they wanted to be when they grew up, I said, “gynecologist.” Said it with a straight face, too. My family fell out laughing. Well, my mom didn’t think it was funny—but the rest of the family did—especially Grandma. I had no idea where “gynecologist” came from; I just knew it was funny. And to make my family laugh like that, on Christmas day, was priceless.

I first stepped on stage when I was 19, and back then I would get so nervous I couldn’t go on without taking a dump first. I know, I can’t believe I’m sharing this with you either. In one club, the men’s room didn’t have any doors. No curtain, no beads, nothing. People would walk by and see me in all my glory “christening” the place. But that’s nothing compared to the looks on their faces when I later took the stage.

I’ve been doing stand-up full time for a little over 10 years now, and one of the biggest lessons I’ve learned is that you have to define what “making it” means to you. It has to be a personal thing. There is no shortcut to success. You will be anonymous a lot longer than you’re popular. This game truly has “marathon” written all over it.

Stand-up comedy is the most humbling job in the world. It is the last pure system of checks and balances we have left. Everything else can be corrupted or compromised to some degree, but not this—not in its purest form. And that’s what I love about it.

One night you can do a TV show seen by millions, and the next night you’re in Where-the-Hell-Am-I, Nevada, playing to a crowd of six. And these six people couldn’t care less about your TV credits, but you still have to make them laugh. You have to dig deep and somehow get them to like you, or at least tolerate you, for 45 minutes to an hour.

Then after the show, just to piss them off, you get to post up by the exit and dare one of them to buy your CD/DVD as they walk out. If you’re lucky, you’ll sell one. If you did your job, you’ll sell six! And that, my friends, is comedy.

Whenever I ask myself “What am I doing here?” the question that always follows is “Where else would I rather be?” Where else can you make a living from making people laugh? The clothes on my back and the roof over my head all come from my thoughts. It is the greatest feeling in the world, and I thank God every day for this gift. And who knows, maybe that is why I’m here.

Owen Smith, who will be performing at Notre Dame on April 13, 2007, wrote this while sitting behind the scenes of the sitcom Everybody Hates Chris. Find out more at owensmithlive.com or myspace.com/oweneverybody.