Way up there, in the first weightless moments of free fall at 10,500 feet, the cold atmosphere is silent.

There are only wisps of sound: of thudding heartbeat, of nylon jumpsuit against parachute container, of clinking metal fasteners, of the plane’s droning engine fading into nothingness above. An island of whispers through a vast stillness.

Gravity vanishes. It is still there, of course, tugging downward, but its apparent absence is palpable in sudden weightlessness. Stomach flutters upward. Nerves spark with energy. Brain struggles — and fails — to comprehend it. To process it. Total free fall.

Then, with hurricane force, the atmosphere strikes back. Terminal velocity: the tug of war between gravity and air resistance. The sheer force knocks back arms and legs; chest to the ground, head and neck forced upward, eyes to the horizon. A belly flop in a wind tunnel. And all around, the roar of atmosphere disrupted at over 120 miles per hour.

Sky diving was not first on my list of Memorial Day weekend plans. I wanted to buy a grill. But my Notre Dame co-worker Aaron Fricke ’08J.D., a routine sky diver, invited me along for a jump at Plymouth Sky Sports. Fricke is a licensed sky diver with around 400 jumps in his logbook. He vouched for the crew’s expertise. Was I free on Saturday afternoon for the first sky-dive of my life? Well, I was gonna buy that grill, I thought. But, ah, what the hell. Sure, I’m ready to jump out of a plane. 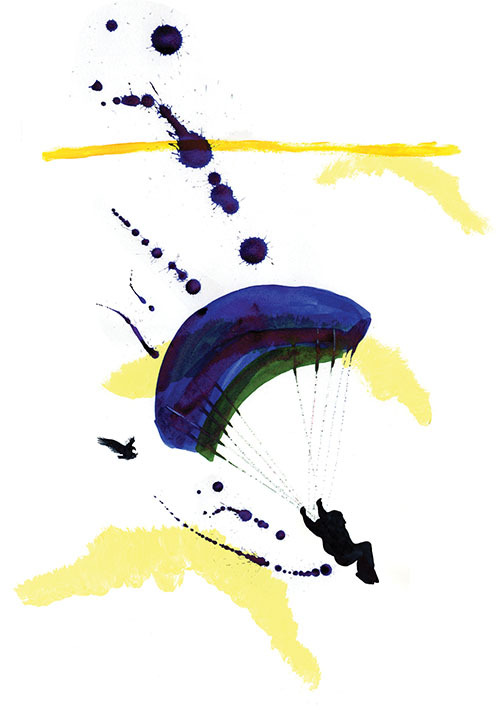 I was not ready to jump out of a plane. I spent the next 48 hours mentally backstroking through excuses my brain manufactured out of a sheer instinct for self-preservation. Too time-consuming. (I could jump right after my training.) Too expensive. (A tandem jump is about $200.) Too dangerous. (Yes: Sky diving is the game of surviving a two-mile fall. But sky diving is also surprisingly safe. In 2012, the U.S. Parachute Association reported 19 fatalities on an estimated 3.1 million jumps in the United States. Tandem jumping, strapped to an instructor, cuts that risk in half. You have a much better chance of death by bee sting.)

So on the muggy afternoon of Saturday, May 25 — lazy westerly breeze, ceiling at 11,000 feet — Fricke and I drove 30 minutes from Notre Dame to Plymouth. The grill could wait. We were going sky diving.

Plymouth Sky Sports is located in an unassuming hangar at the Indiana town’s municipal airport, itself a collection of unassuming hangars and an east-west runway. I arrived expecting something like a rowdy crowd of testosterone-fueled adrenaline junkies with a Beastie Boys playlist blaring on a loop over beat-up amplifiers.

Instead, the area is quiet and spacious and clean, with only the occasional whiff of airplane exhaust and the steady drone of a Cessna to fill the space. In the hangar that doubles as their headquarters, staff members are polite and soft-spoken, offering encouragement and advice to jumpers like Jedi of the sky.

After signing my life away on a hold-harmless form (it’s so long I actually miss a page at first), training begins. I watch a DVD on sky diving. There are lots of sober warnings. Then Troy Church, a tandem instructor and career sky diver who has completed thousands of jumps, talks me through the jump, step-by-step. He issues more notes of caution, usually in the form of jokes. He also issues the most important rule of sky diving: Have fun.

I catch glimpses of some other first-timers. They sit at unadorned picnic tables in the hangar, still in gravity-induced dazes, as they try to process what just happened to them. Occasionally they blink.

I pick out a forest green jump suit. Church hands me clear plastic goggles and an altimeter, which looks like an oversized watch and loops securely around my left hand. The altimeter’s face is mostly white, with two exceptions: a little sliver of neon yellow before 2,000 feet and a menacing slice of blood-red after that.

You want to pull the chute before that slice of red, Church says, or else the jump gets real interesting.

Way up there, the fear waits.

It is there, coiled and cold, but I hide it with nervous confidence. The altimeter on my wrist winds up, the needle creeping clockwise as the peppy Cessna 182 — a sky diving favorite affectionately nicknamed a “mule” for its reliability — climbs foot by foot into the cloud-brushed Indiana expanse. The patchwork farms below, all mottled greens and earthy browns, are mere abstractions. Even though the Cessna flies far lower than the average commuter jet, the altitude is incomprehensible. On a human scale, the ground seems impossibly far away.

Four of us are crammed behind the pilot’s seat into a fuselage no bigger than a Volvo station wagon. Fricke is there in his red-and-black jumpsuit. Sky diving pro Steve Verner — lean, mustachioed, weathered — is wearing a helmet bearing two cameras for photo and video of my jump (another $119). Church, my jump partner, is wearing our tandem parachute and the exact devil-may-care grin I expect from a guy who makes a living by jumping out of airplanes while strapped to terrified sky diving rookies. The guys chat and joke, relaxed, as if to betray the electric tension in the air. Except for me. I am silent.

Near the apex of the climb, Church attaches his harness to mine. Cinches it tight.

My altimeter’s needle reaches the threshold at 10,500 feet.

Fricke heaves open the right side of the Cessna, and with a violent CHOOM, the heavens storm into the cabin to claim us.

Now I am afraid.

Fricke is out the door and gone.

Verner unfolds his lanky frame and clambers under the starboard wing with the graceful fluidity of a child on monkey bars. There he hangs, suspended above nothingness, filming my exit.

I perch on the edge of the door’s opening, my feet resting on the strut of the wing in the open air. I can’t even see Church, who is kneeling inside the cabin, the front of his harness clipped to the back of mine. I can only wait for him to jump. The sheer vastness of the sky and the earth comes into focus against the plane’s wing. The chilly air smacks my face with a tingly shock of diving into a Pacific breaker.

We are two miles above the ground.

Church has coached me on what to do at this moment: Hands on the shoulder straps. Hands on the shoulder straps. But at 10,500 feet above the ground, staring into two miles of sky, I forget completely. My arms are out like a zombie’s. Church, not without urgency, brings my hands to the harness. Knuckles white. Face blanched by fear. My “Oh s—t” face.

Church shouts one last command, inaudible above the wind’s unrelenting tempest. Then he heaves us out of the plane. We fall.

We tumble through the silence in an ungainly wobble, not quite a flip and not quite a barrel roll. Arms unfold into a touchdown sign, feet spread apart to maximize our drag.

There is a tingling electric taste, a taste of frission, a taste of lightning. The air sweeps in to steal the tastes away, leaving cottony parchedness.

After about eight seconds of falling at 135 miles an hour, we hit terminal velocity. The thickening atmosphere will not permit a faster fall. The air seems to rubberize my skin, distorting my open-mouthed grin into a cartoonish exaggeration. The resistance is so fierce my lips and cheeks are actually flapping. Imagine sticking your head out a car window at 120 miles per hour on a cold spring day.

Preflight training kicks in. I remember to run my mental HAT check: Horizon, Altimeter, Thumbs up. Horizon: I am facing the distant curve that is slowly bending into a straight line, my chin pointed to the ground. Altimeter: strapped securely to my left wrist, needle spiraling counterclockwise toward the red. Thumbs up: thumbs up. I am good. I am great.

Now I know why the Beastie Boys show up on so many skydiving videos. The adrenaline is a rippling surge of pure sensory overload. The mind hangs. There is only the unrelenting air buffeting me. For a moment, instinct demands that I shield my face with my hands. I don’t. Too busy flashing a thumbs up to the cameras on Verner’s helmet as he free-falls nearby.

The altitude defies understanding. How can humans comprehend two miles of vertical space, of moving about 173 feet every second? I can’t. Not on my first jump. And because I can only see the horizon, and Verner floating roughly 10 feet in front of me, I lose track of altitude.

For 30 seconds we fall. And I am so euphoric, so wind-blasted, so electrified, that I forget we are falling.

Church, fighting the rush of air, grabs my left wrist and rotates it so the altimeter is in my face. I stare blankly through my clear plastic goggles. Altimeter, I think. That’s the altimeter. Then it hits me.

My right hand frantically clambers up my right hip, feeling for a rip cord that isn’t there. Meanwhile we are still plummeting to earth, the altimeter winding toward the target deployment altitude of 5,500 feet.

Where is the cord?

The Sigma 370 Tandem parachute erupts without warning. Church deploys it so fast — he pulls the rip cord I tried so desperately to find — that the air resistance nearly slams us belly-up. As the enormous blue-and-green gossamer parachute slides open, we jolt from 120 mph to about 17 mph in less than three seconds.

For about three minutes, the sky is quiet again. Church puts us through a few turns, yanking on the canopy’s toggles in sequence. We drift surprisingly quickly to the ground, maneuvering slightly toward the open expanse of grass and runway at the drop zone. Only now, with the ground expanding below us, can I comprehend our altitude.

At 400 feet, we wheel around in a lazy U-turn to align with the drop zone and face into the wind. Church jams on the parachute’s toggles, furling the canopy to catch the air. I pick up my legs so I see my grungy New Balances above the oncoming ground, and we float gently into a freshly mowed field.

Way down here, the gauzy, sweet smell of grass reaches up and draws me back to earth.