So, what will it all look like, this impressive instrument and its fortified perch, once they’re built and installed in the south end of the Basilica of the Sacred Heart?

At Notre Dame, it’s customary to want to see things. Maybe we’re spoiled by our School of Architecture, where students learn to produce brilliant watercolors of beautiful buildings and streetscapes that, alas, too infrequently materialize out of the realm of imagination, paint and paper to take shape in brick, wood and stone. 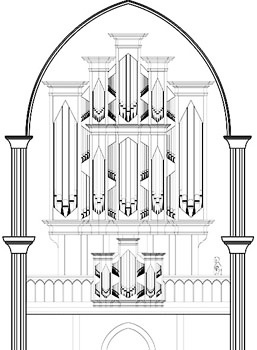 The instant gratification itch gets scratched every day around here. Things happen fast on a university campus with nearly $1 billion in construction projects underway. If you can’t imagine it behind the boards and dust and clatter today well, blink, and it may just be move-in ready tomorrow.

But the basilica organ is different. There is no artist’s rendering of the Murdy Family Organ as we expect it will appear in time for Midnight Mass on Christmas Eve 2016.

“It’s a matter of time,” says Paul Fritts, whose shop has been working on the project since 2012, and whose designs exist primarily as thousands of interrelated numbers in an Excel spreadsheet and as two-dimensional printouts on massive sheets of paper or mylar. “It’s more efficient to build things than to spend a couple hundred hours drawing them,” he explains.

Building things is what they do, and they do it really, really well. And while Fritts & Company builds, we can dream.

We can also look at the company’s tidy website, where Fritts associate director and organ historian Bruce Shull keeps an opus list documenting the firm’s distinctive work since 1979. Few will be satisfied by the 2D, black-and-white schematic of Opus 37 that appears on the home page. It’s hard to imagine the white painted case amid all those lines, much less the decorative gilt screens, the silvery pipes or the walls that will be painted blue behind the organ to match the church’s ceiling — though, if you could print it out, it might make a fun coloring sheet.

But click on “Opus List” to get the flavor of the shop’s work. There you’ll see photographs of the first Fritts organs, which pipemaker Erik McLeod played as a teenager in the Methodist and Episcopal churches of Shelton, Washington. Check out No. 24 and you can see (and better yet, hear) a video of Craig Cramer, Notre Dame professor of organ, performing on the instrument Fritts created for the Reyes Organ and Choral Hall in 2004.

No. 18, a commission Fritts completed for Pacific Lutheran University in 1998, and Nos. 26 and 27, built for the Catholic cathedrals of Columbus, Ohio, and Rochester, New York, in 2006 and 2008, respectively, convey the grandeur of what’s in the works for our Sacred Heart church in 2016. Curious what it looks like when thousands of carefully crafted pipe organ parts are staged in a church before assembly? Be sure to click through the Columbus photo gallery.

You can also see a photo of No. 40, the relatively prim studio piece designed for a private home in Louisville, Kentucky. That organ is now back in the company’s possession and will arrive on campus tomorrow (Oct. 8) to be installed in the basilica’s nave, over near the confessionals and the room where priests vest for Mass. It will be amplified to serve as the interim basilica organ during next year’s transition and is nearly identical to No. 38, the Denis and Susan McCusker Family Organ, which Fritts designed and built for a choral practice and recital room in Notre Dame’s Campus Ministry building, Coleman-Morse Hall.

But, we’re sorry. You can’t see a photo or drawing or anything else of the great and glorious pipe organ that’s coming to Notre Dame next year. Nothing, beyond what we’ve already shown you, that is.

You’ll just have to check in with us from time to time to see what’s new.