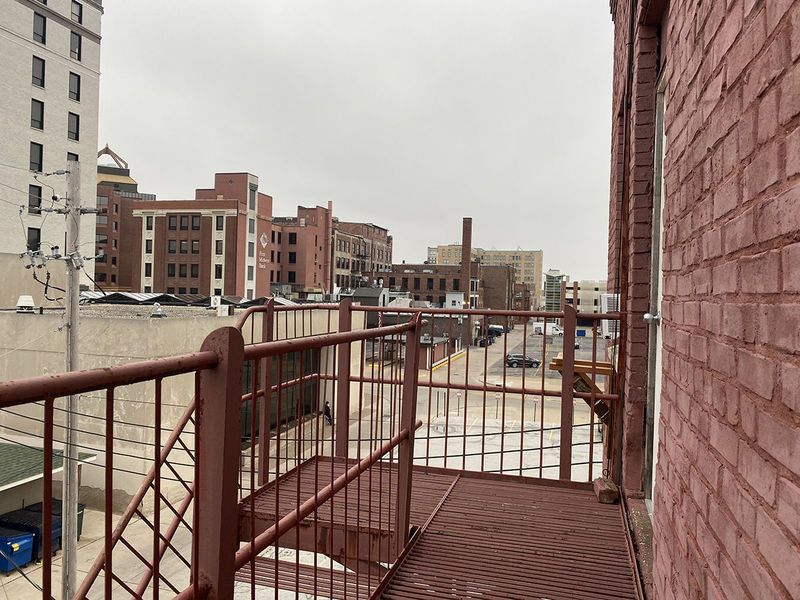 A reporter’s remote point of view in a time of social distancing. Photo by Megan Valley ’18

The first weekend after Illinois Gov. J.B. Pritzker issued a shelter-in-place order isn’t so different from most weekends: I read and nap and make myself a 4 p.m. Bloody Mary and write a tiny bit and talk to one friend on the phone an embarrassing amount of times. I do laundry and (most of) the dishes that had piled up during the week and figure I can push one more week on cleaning my stovetop. I only leave my apartment building to take out the trash or to sit on the fire escape and listen to music. A boring, but not atypical weekend.

Sitting on the milk crate I’ve left on the fire escape, I can see the main drag of bars and restaurants in downtown Moline, Illinois, which, while rarely bustling, is never this sleepy. It feels lonelier, or at least colder.

Most of the newspaper office is empty, except for the newsroom. I’ve worked from home for two days now. I shuffle from my bed to my futon to the fire escape and back again, calling in for meetings with editors and fellow reporters, texting photographers, conducting phone interview after phone interview. I’m not reporting on the hospitals or public health, specifically. I cover schools, and they’re all closed; I’m reporting on what everyone is doing instead. I mention COVID-19 once or twice in my stories. I’m reporting on the closings as if they were something almost separate from the virus.

I’m not from the community I report on, and that’s made more obvious when I conduct all of my reporting from my studio apartment. It’s so shockingly similar to what I was doing before. After 16 months, I’m still so distant from the community that I more or less function the same when I’m physically separated from it. The reporters in the newsroom who have lived all their adult lives here can pick up a tip during a trip to the grocery store or a night of drinks with friends. The main community I’ve found is with the other young reporters and photographers, almost all semi-recent transplants. It’s good to stave off loneliness, but less so when trying to move from community observer to pillar.

Journalists are supposed to bear witness to life in their communities: the mundane, the joyful, the corrupt, the odd or otherwise notable. Now, I am physically a community of one. The only things I bear witness to are the ever-growing collection of dirty dishes in my apartment and the smoke drifting through the fire escape grates from my downstairs neighbor lighting up a cigarette on his welcome mat. Sometimes, there are fluffy snowflakes that immediately dissolve. Everything else is hearsay, if well-sourced.

I interview people on the phone, which has always been fine and good for technicalities and impersonal broad strokes: Explain this policy to me, talk me through this document I requested, give me an overview of what the people you represent think about this. It is useless for the personal glimpses into who a person is and what they’re feeling.

Right now, I’m reporting on the high school and college seniors who are having the ends of formative phases of their lives squashed. I’m interviewing them about what they’re missing out on. There’s little narrative detail to be gleaned. There are even fewer innocuous entries into conversations — a coffee order, a cool pair of shoes, patches or pins on a bag — to get to know them before “the interview” part of the conversation begins. I don’t know if this high schooler waiting to hear back from the U.S. Naval Academy looks as stoic but babyish as I imagine him over the phone. The college track runner who talks about building a fort with his roommates to watch movies in — is he as sweet and goofy as his voice and plans make him sound?

The stories that need to be told now are more urgent than usual, more central to the shared experience of a community confronting an outbreak together. But if I prioritize responsible citizenship over aggressive journalism, my reporting on those stories is necessarily worse. The Venn diagram of the responsible citizenship and aggressive journalism, for me, had always been a circle. A pandemic separates the two spheres.

We’re reporting every day that people should practice social distancing and stay home except for necessary business. Journalism is certainly a necessary business, and if it would affect only me, perhaps I’d risk infection to do the reporting I value most. But how could I reasonably ask teenagers and young adults to let me into the homes they share with their parents, sometimes older, sometimes diabetic, often at a greater risk if they were to catch the virus?

Our photographers are taking portraits through windows. Every shot is angled to hide the reflection of the camera. Even when the whole framing draws attention to the worldwide situation and the presence of a photographer, the camera must be an unobtrusive observer. The photographer’s distance, their physical separation from their subject is better documented and expressed than mine. For my contributions, the verisimilitude that comes only from being present is missing. I don’t know how to recreate it.

Video chat could be slightly better, I suppose. Still, it’s one shot, from the shoulders up, in front of a wall or headboard. It narrows the frame of reference I have to make observations that offer clues about personality or inspire questions that leads to insight about the lives of the people I interview. For two people in isolation speaking over the phone or on video chat, the separation is more than just physical. There’s nothing shared neutrally, only a shared crisis. The personal connection is, in every way, “virtual.”

Am I allowed to end an essay in media res? In the Midwest, we’re mere days into state-mandated house arrest, if it’s started yet at all. Whatever’s yet to happen — it likely isn’t good. In mere days, a reflection on how a pandemic is making my job more difficult could seem, at best, quaint. Better to end it here, when my apartment is still cozy, and the snow isn’t sticking.

Megan Valley writes about education for the Quad-City Times and lives in Moline, Illinois.