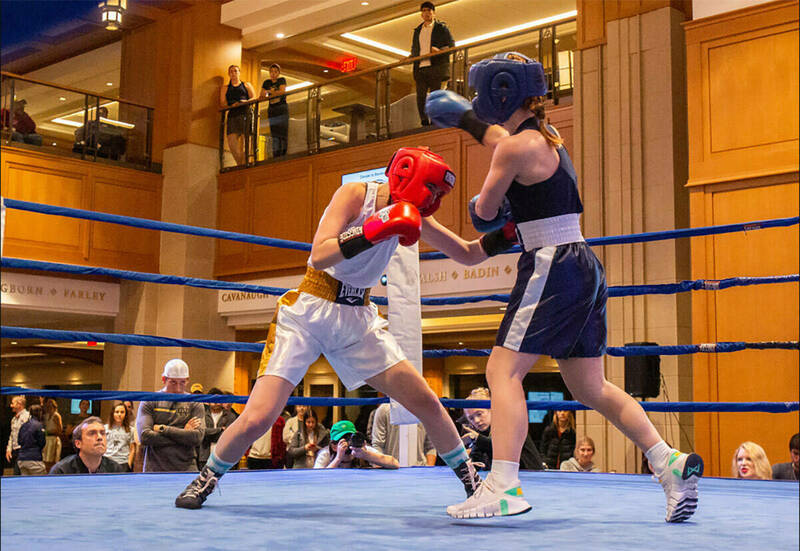 There’s a grungy place in the basement of the Joyce Center on Notre Dame’s campus where I learned almost everything I know about myself. It’s called The Pit, and it’s where members of the Notre Dame Women’s Boxing Club hone our skills together.

From my days as a novice boxer to my late nights as a captain, the club has illustrated for me that amazing things can be achieved when a determined group of people unite behind a common cause. Our cause is supporting two Holy Cross schools in Uganda.

What I sought in the Pit as a first-year fresh from Welcome Weekend was a daily workout with a group of like-minded women. What I found was a community that has transformed my worldview into one that accepts, and even welcomes, uncertainty.

When people ask me what I learned in the club, my answer echoes Teddy Roosevelt’s famous quote, “The Man in The Arena,” that hangs on the wall of the boxing gym, right next to the heavy bags:

It is not the critic who counts; not the man who points out how the strong man stumbles, or where the doer of deeds could have done them better. The credit belongs to the man who is actually in the arena, whose face is marred by dust and sweat and blood; who strives valiantly; who errs, who comes short again and again, because there is no effort without error and shortcoming; but who does actually strive to do the deeds; who knows great enthusiasms, the great devotions; who spends himself in a worthy cause; who at the best knows in the end the triumph of high achievement, and who at the worst, if he fails, at least fails while daring greatly, so that his place shall never be with those cold and timid souls who neither know victory nor defeat.

The passage is not about winning, but about striving to achieve great things — even if the effort ends in failure. Victory or defeat, that’s not the point; the point is having the guts to push yourself to your limit, at the risk of blemishing a perfect record, falling short of expectations or missing past marks. I experienced this in multiple ways as a boxer at Notre Dame.

The first: I never won a bout until my senior year, and I never won a bracket. In fact, hundreds of hours of work landed me a single Baraka Bouts victory.

The second: I entered my third boxing season as a junior captain uncertain how we would lead the club through the challenges that the COVID-19 pandemic posed to training and building community.

The third: I walked into my fourth and final season ready to serve as club president, without any real idea of how anything would go, anxious about taking on the fundraising legacy of those who had led before.

My defeats in the ring forced me to learn how to define myself outside of the perfection I had so desperately sought as a teenager. After losing my first bout as a freshman, I had nothing to lose as a sophomore. Placed in a competitive bracket, I was matched against a senior captain on the first night. It was the best I’d ever boxed up to that point; I had to rise to her level, and I did.

Even though I lost that bout, I have never felt more alive than I did during those three rounds. I remember telling my corner, “That was so much fun,” between labored breaths, a massive smile on my face. I felt it in my bones: I was a good boxer, and I had two years to get better.

Instead of listening to the tiny voice in my head that worried about what my classmates and friends from home would think about a second loss in two years, I leaned into the teammates and coaches who invested in me, choosing to be proud in spite of the “loser” label many might apply to me.

I walked away from that bout ready to come into my own in my third season as a boxer. There were whispers about me being named a junior captain, too.

That junior year triumph never came. The COVID-19 pandemic hit in March, and the summer planning meetings hinged on hoping we’d be able to keep the club together through an off year. We were unsure if we would meet our fundraising goal or if we had recruited enough new members to sustain the club. Due to COVID restrictions, we could not practice indoors, we were not allowed to have contact and, therefore, no sparring. The annual Baraka Bouts did not take place.

From this, I learned that despite uncertainty, despite an inability to spar — the heart of the sport that unites us — the club succeeded because the captains and other leaders had the courage to keep showing up every day.

I am indebted to the women I led with that year. None of the success we had in reviving the Baraka Bouts and the club’s fundraising prowess this year would have been possible without them. Despite the hand we had been dealt, they continued to train new boxers and kept the spark of our mission alive.

Several women who were “COVID novices” in 2020 — the year without contact drills or sparring — performed well in this year’s Baraka Bouts. Some will be leading the club next season. Our club is strong because of the people who invested in it, despite knowing they would graduate before their investments would be realized in the ring.

I was asked to serve as head captain for the fall 2021 season, but questions and fears swirled in my head: how was I going to lead a club of boxers without ever having won a bout myself? How were we going to plan the Baraka Bouts without a blueprint after a year without an event?

Here’s how: by relying on my co-captains, coaches and three- and four-year veteran boxers to lead by example. By asking for help and by accepting, as I had inside the ring, that things outside the ring didn’t have to be perfect either.

While boxing is an individual sport, our club is united in a shared cause. As we generate financial support for the missions, we also teach self-discipline and strive to make every teammate a better boxer and a more selfless person.

In the face of this, individual victories and defeats fall away.

As Teddy Roosevelt said, it’s not about winning or losing. It’s about becoming a better boxer and person than we were yesterday while supporting the education of our peers halfway across the globe. It’s about stepping outside of ourselves; about helping our teammates today despite knowing they could be our opponents in the ring tomorrow; about learning how to take a punch — literally — and bouncing back without hesitation; about how to keep going even when we want to stop.

We returned to the level of fundraising we had achieved pre-pandemic. The club raised over $80,000 for the Holy Cross Missions in Uganda, which was generously matched by the Wolohan Family Foundation.

I returned to the ring, uncertain if I would enjoy getting punched in the face as much as I had as a sophomore. While I had to confront the pressure to perform well that comes with being the more experienced boxer, the one who’s supposed to be “better,” I still loved it.

In the end, I did win a bout. One single bout. As my hand was raised, I burst into tears; my nickname is “Water Works,” after all, and three years of striving for victory had finally been realized. I did not, however, win my bracket.

Despite shattering our fundraising goal and achieving my own personal benchmark, losing in the finals hurt. I questioned my skill and my credibility. I still lie awake at night, turning over every millisecond of that final bout in my head, imagining what I should have done differently. I grieved, struggling to reconcile the sting of defeat with all the joys the season brought.

But this sport taught me how to hold both victory and defeat simultaneously, so I think it was a fitting end to my story.

Erin Fennessy is graduating with majors in biochemistry and French, and a minor in journalism. This magazine’s summer 2021 intern, she also has written for Popular Science and The Observer. Erin will be teaching high school science in Baton Rouge, Louisiana, through Notre Dame’s Alliance for Catholic Education.