We spent 148 days outside Abu Dhabi, waiting for the Gulf War to begin. During that period of restless non-conflict, all the casualties in our deployed unit would eventually be traced back to letters written stateside and delivered to us in innocent-looking canvas sacks excreted out the rear cargo doors of the dusty C-130’s shuttling to and from Riyadh. Every one of the letters that filled those sacks was a dull blade with one of our names on it, and yet we waited like idiots for those planes to land. We waited.

In the 1981 sci-fi/western Outland, Sean Connery plays the marshal of a space outpost who runs afoul of the corporate drug ring operating on his territory. Poor Sean waits as the next shuttle from earth approaches, watching the countdown to arrival, knowing his assassin is on board. Sean has the benefit of knowing exactly what is coming for him, though. We never did.

Not all of those 148 days were spent in idleness, mind you. On the contrary — for the first 60, we worked 12-hour shifts to build a tent city from nothing, on the vacant end of a United Arab Emirates Air Force tarmac. We worked at night, erecting tents and wood-framed structures, laying power lines and water lines, dehydrating ourselves. We worked too well. We worked ourselves right out of work, leaving 88 days remaining until the January night when our warplanes lit up the skies of Baghdad. 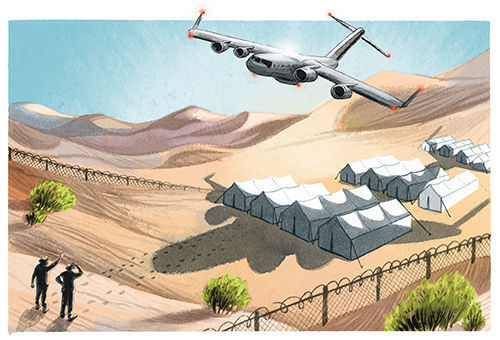 I was a first lieutenant at the time and thought I was in love, just like Jimmy Cross in Tim O’Brien’s The Things They Carried: “First Lieutenant Jimmy Cross carried letters from a girl named Martha, a junior at Mount Sebastian College in New Jersey. They were not love letters, but Lieutenant Cross was hoping, so he kept them folded in plastic at the bottom of his rucksack. In the late afternoon, after a day’s march, he would dig his foxhole, wash his hands under a canteen, unwrap the letters, hold them with the tips of his fingers, and spend the last hour of daylight pretending.”

If the biggest killer of soldiers is combat action, then the second-biggest is combat inaction. Boredom is the silent enemy of the warrior, because boredom has little problem infiltrating the perimeter defenses of the mind. At Bateen Air Base, where we spent so many weeks tanning because we’d read all the books in the library tent, watched all the movies or crawled indoors once again to hide from the dust clouds pushed by the shamal winds, boredom created phantoms where none existed. Fistfights broke out over disposable razors and cans of soda. Female airmen got pregnant on purpose, to escape. Officers had meetings to discuss improving morale, starting with their own. We were well aware of our predicament; we occupied a stretch of borrowed sand on the ass-end of Desert Shield, an amorphous conflict that was only tangible in its branding. The truth was that any real action, once it started, would take weeks to get to us.

The mail planes arrived three times a week, full of letters and packages from home. There were several varieties, none of them good. Years earlier, back when I was in college, I had played this game with my roommate where we tried to come up with the best way to die: Drown in beer? Choke on deep-dish pizza from Giordano’s in Chicago? Suffocate between huge breasts? It was fun for a while, yet uncomfortable. Mail call was like that. We knew whatever we opened, even the sparkling and the perfumed, would hurt us somehow. They would fall somewhere on the spectrum of pain.

Take the upbeat, happy-sounding letters from home. Traitors! Wolves in fancy stationery! Those letters whispered in your ear then slid through your skin, right behind the earlobe, right into the doubt center of the brain. Why were they doing so great without me? Were they really better off with me over here? Did they want me back?

The short notes were worse: don’t worry, we’re fine, be safe. The devil in those was all the blank spaces, all the unwritten words. What aren’t they saying? What were they hiding? I called these “teenager” letters. When you ask a teenager how things are, and they answer “fine,” they are certainly anything but.

In light of these, the Dear John letters were almost welcome in their honesty. Sure, they were a dull ax to the forehead, but nothing more, no subterfuge. My best electrician, a guy I’ll call Staff Sergeant Thompson, got one of those. His wife had grown tired of waiting and moved in with his buddy Gomez, who was one of the lucky few who had stayed behind to staff the skeleton crew on base. It took a few weeks, but we were able to get Thompson home on temporary leave to deal with matters. If we hadn’t, he would have found a way himself, maybe put an M-16 round into his foot, maybe drove a Humvee into one of the concrete blast walls.

We had no real alternative to the mail. The banks of satellite phones we got in November were more static than voice, and they operated on prepaid cards, another peculiar form of torture. After you swiped the card and the line connected through, a red LED display counted down your remaining call time in front of your face. It caused chronic brain-lock. I had so many things to say to my girlfriend back in Ohio that they dammed up solid and none came out, my miserable last seconds wasted in such drivel as “Don’t worry about me” and “It’s really hot here.”

We thought the care packages might be safe because they came from absolute strangers and were therefore devoid of emotional trip-wires. Not so. I opened four of those; three came with shrapnel. The fourth was safe; a banner made by second-graders in Texas somewhere, addressed to “Hero Soldier, Sailor or Airman” and packed with a rainbow of Kool-Aid flavors.

Those other three got me. I ended up writing them all.

Theresa was a 9-year-old girl from Tennessee. If people write to perfect strangers about what’s best in their lives, then Theresa’s was her horse. She sent lots of horse pictures and pictures of green hills near her home. She mentioned her mom, her school. She didn’t mention a dad. I wrote to tell her that her horse was a beauty. I wrote that she should study hard. I think I wrote the things a dad would say.

Amber was a sophomore at the University of Akron. The envelope had a local postmark, that’s why I’d picked it. She sent a photo of herself, leaning against a tree. She was gorgeous, in a way that made me think she had been begged by someone to be a cheerleader but had turned them down out of self-respect. Amber knew my hometown well. She wrote about going to Browns games, raking too many leaves, fishing Lake Erie for walleye. She seemed like someone I needed to keep in contact with. My girlfriend was pretty, too, and alone. Lots of guys were back there with her in Cleveland. I was always one letter away from being the next Thompson.

Pat was the toughest. Her letters were written in purple ink, flowing cursive, and smelled of lilac. She revealed herself in stages. First letter: teacher in California. Second: divorced. Third letter: two teenage girls. Fourth, with photo: Obese. She hoped we could meet someday, after the war. I sounded like a nice guy, she wrote. But the truth was, I wasn’t. Maybe, I wrote her back, who knows. Never, I already knew. I think we both knew.

Some books written about wartime have captured certain aspects of war very well. Heller’s Catch-22 nails the absurdity of war; Crane’s The Red Badge of Courage portrays the fear. Of all the war books I’ve read, though, O’Brien’s The Things They Carried does the best job of describing the perfect loneliness of war and the particular cruelty of wartime mail. First Lieutenant Jimmy Cross’ Martha wrote him such wonderful letters from back home in New Jersey. She signed them “Love, Martha.” The letters only weighed 4 ounces, O’Brien tells us. Here’s what he didn’t say — 4 ounces is the rough equivalent of a magazine emptied of its rounds.

Joe Kapitan is an architect and writer living in Cleveland.