Indiana’s 200th birthday party took a turn through a quiet Notre Dame campus last Saturday afternoon, an unheralded moment on a cool, sunny day that happened to coincide with the television broadcast of a football game played on a wet, windswept field some 575 miles away.

A dozen photographers and roughly the same number of spectators gathered around noon at the corner of Angela and Eddy and waited for something to happen. When the escort of police cars and motorcycles arrived, it seemingly blocked the street. 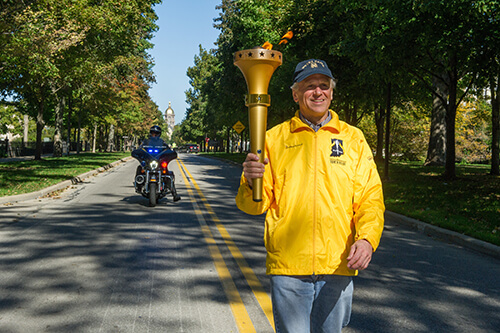 Students missed the moment when history arrived in the form of the Indiana Bicentennial Torch, carried in a beige convertible Studebaker — the pride of South Bend — a car so beautiful that it can be hard to understand why they stopped making them so long ago.

As the torch entered campus to trace one of the last legs of a 3,200-mile, five-week journey through the state’s 92 counties, it seemed fitting that members of the Notre Dame family should carry it. The first to get the honor was Father Paul Kollmann, CSC, ’84, ’90M.Div., executive director of the Center for Social Concerns. When the torch passed from a passenger in the convertible to the Holy Cross priest standing on the edge of campus, it seemed no moment could better represent the story of Saint Joseph County.

Passenger and priest, each wearing their official yellow jacket with the word “Torchbearer” on the back, had their picture taken together, as has been done during every transition on this journey.

Then Kollmann’s real responsibility began: Delivering the torch to the back entrance of the DeBartolo Performing Arts Center while surrounded by photographers, who were either hustling past on foot or riding before him in a club car to capture each moment from every possible angle.

A new crowd and a new torchbearer awaited him at the DPAC. As the torch’s next handler started her trip around the building at an almost Olympic pace, one official called out, “Take your time!” Lucky for me. It is not easy keeping up while taking notes, dragging a bicycle and trying to stay out of the camera’s eye.

At the donor wall west of the DPAC the crowd got larger — mostly local families, few if any students — and for good reason. Soon followed the most photogenic moment of the day, as the University’s president, Father John Jenkins, CSC, ’76, ’78M.A. took the torch and walked it down Notre Dame Avenue.

Father Jenkins’ segment was the longest segment for any of the torchbearers on campus. He took time to interact with the spectators, waving and chatting as he made his way toward the Main Gate. “Hi guys, how are you? Thanks for coming out,” he called to a couple of kids on the curb.

Torchbearers Kollmann and Jenkins were joined on this brief ND tour by engineering Professor Tracy Kijewski-Correa and two students who grew up in Saint Joseph County: Anna Rohrer, a sophomore cross-country runner from Mishawaka and first-year student Morgan Ludwig of Granger.

At the University’s front door, Jenkins handed off the torch to another passenger in the Studebaker, then added a historical footnote of his own. “We’re celebrating our 175th anniversary next year,” he said. “Since 1842 when Father Sorin came here we’ve been closely joined with the state and its destiny, so we’re [glad] to join together with them and celebrate this historic event.”