My experience of Holy Week in Jerusalem this year was marked by deep tragedy and profound compassion, tied together by . . . tattoos.

For the Notre Dame students studying in Israel and Palestine this spring through the Jerusalem Global Gateway, which I direct, Holy Week began in Jordan. Palm Sunday morning was spent under palm-frond umbrellas on the shore of the Gulf of Aqaba, at the intersection of Jordan, Saudi Arabia, Egypt and Israel.

We had spent the evening before in a Bedouin camp in Wadi Rum, one of Jordan’s most famous destinations after the “Lost City” of Petra, which we had visited earlier in the day. After a full day of hiking, a 4×4 excursion and a camel trek, we were sitting in a tent, enjoying an astonishing meal of lamb and chicken roasted underground in the desert sands. 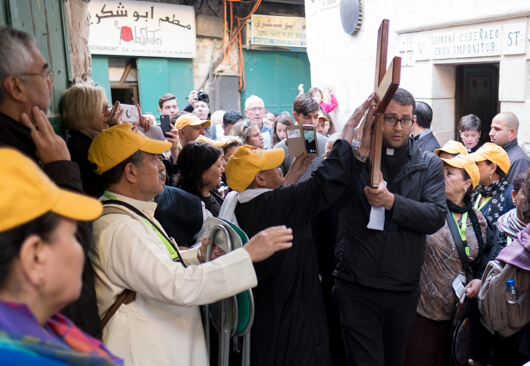 Throughout our time in Jordan, our guide, Walid, had mentioned that the vast majority of food service workers in Jordan were economic migrants from Egypt. While we were relaxing, one of the workers pointed at the tattoo on my right forearm. “Who is that?” he asked. “Issa,” I said, using the Arabic name for Jesus. “I know!” he responded, smiling broadly. “I am Issa too! I am from Egypt.” I mentioned that the tattoo design was Coptic; it’s from Razzouk Tattoo, a family that has been inking Christian pilgrim tattoos in Jerusalem for close to 700 years. He already knew it was Coptic. I asked if he also had a tattoo, a Coptic tradition for almost as many centuries. He turned his right wrist to reveal a distorted and faded green cross, clearly inked when he was a small child, maybe even a baby.

That moment of encounter — Christians meeting in a Muslim-majority context, his appreciation that an American tourist acknowledged and respected his Coptic community and its traditions — came rushing back the next morning, Palm Sunday, as news broke of the bombings targeting Coptic churches in Cairo and Alexandria. Part of a series of attacks by Islamist militants targeting Copts for a variety of reasons, the attacks on Palm Sunday and, a little over a week later, at St. Catherine’s Monastery in the Sinai, held special significance and alarm. As religiously-sanctioned extremism continues ripping through the Middle East, Copts and other Christians in Egypt are feeling especially threatened. 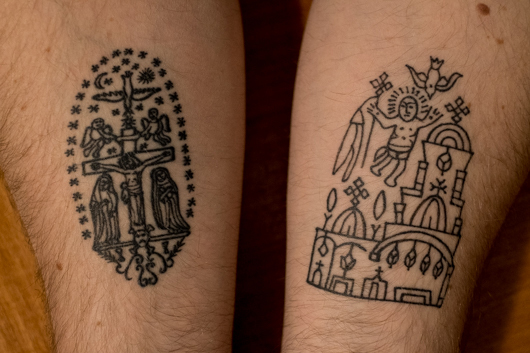 Holy Week in Jerusalem is characterized by a series of Christian processions retracing the approximate paths trod by Jesus during the days before his crucifixion and resurrection. On Good Friday, Christians have the opportunity to walk the Via Dolorosa, the Way of Suffering, on which the condemned Christ carried his cross.

While Christian pilgrims walk the Via Dolorosa every day of the year while visiting Jerusalem, the route has special significance on Good Friday, especially with so many additional Christians visiting to observe the holy day. This year was doubly special since Eastern and Western Christians observed Easter on the same Sunday.

We gathered at 6:30 a.m. on Good Friday morning to walk the Via Dolorosa with the Anglican and Lutheran communities. Both are led by Palestinian bishops. Given the many Christians crowded into Jerusalem’s Old City, more than a few pilgrims joined our procession along the way. We soon found our group infused with a large group of Coptic pilgrims from Egypt.

As we processed from one Station of the Cross to the next, we fused into one large group. At one of the stations — I can’t remember which — Archbishop Dawani and Bishop Younan handed the large wooden cross they were carrying over to our Egyptian friends. The feeling was electric. One after another, our Coptic friends grasped the cross, kissing it as tears streamed down their faces.

My thoughts returned to Issa — Jesus — and his broad smile as he admired my Coptic tattoos. I saw in these pilgrim faces people who had endured bombings, other threats and structural inequalities in their home country, and who were now grasping the Cross of Life. I saw deep recognition between Egyptian and Palestinian Christians, each community facing distinct but related challenges in an ever-changing region.

Holy Week in Jerusalem provides many opportunities for Notre Dame students. It is an opportunity to ponder the suffering of Jesus and the mysteries of faith. It is an opportunity to experience the Holy while deepening connections. But it is also — for us outsiders — an opportunity to observe expressions of contemporary Christian faith and life in the Middle East, a coming to deeper acknowledgement and engagement with Christian communities and their traditions (including tattoos) stretching back to the time when Jesus first walked these streets.