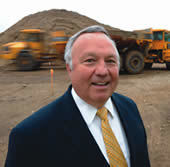 You might not call it love-hate, but the relationship between Notre Dame and South Bend has always mixed wariness of each other’s faults and a pragmatic recognition of Notre Dame’s role as a major employer and all-around economic engine. Football weekends, for instance, pump millions of dollars into the local economy, but people who live near campus and don’t have football tickets know that game days and the traffic mess they create are something simply to be tolerated.

“The very fact that we had to pass an ordinance to create a community-campus advisory coalition to assure communication on a regular basis about neighborhood issues such as game-day problems says it all,” says Kathleen Cekanski-Farrand ’73J.D., South Bend Common Council attorney.

The relationship is soon to change in a dramatic way that could not have been imagined even a few years ago. The key to the transformation will be Innovation Park at Notre Dame, for which ground is to be broken yet this summer. The research facility has the potential, in the near future, to transform the University and the surrounding community into one of the great economic developments of this generation, not just in South Bend or the Midwest but in the United States and, perhaps, the world.

“I see this as working toward a partnership that both the city and Notre Dame have never truly had,” says Cekanski-Farrand. “We’re going to be leaders throughout the 21st century and beyond. This will hopefully capture the brain-drain of talented students who are leaving.”

Innovation Park will open its doors to a variety of start-up business ideas, but without doubt its eventual centerpiece will be commercial applications from the new Midwest Institute for Nanoelectronics Discovery (MIND), funded in part by a consortium of computer industry sponsors and one of four such research centers in the country. MIND will draw on the collective brainpower of Notre Dame and several other Midwestern universities to search for what is hoped will be a smaller, faster and less power-hungry replacement for the silicon computer chip in use today.

According to Innovation Park director David Brenner ‘73, (picture above) MIND’s Notre Dame research team will do its work in the Stinson-Remick engineering building now under construction on campus, then send spinoff projects to Innovation Park to be developed as business applications.

Several new ventures are being considered for Innovation Park itself. One could be EmNet, a young, Granger, Indiana-based company that specializes in systems which monitor and control combined sewer overflows. The company began in 2004 as a joint venture by Notre Dame and Purdue University, along with the city of South Bend.

Other possibilities include MedXCycle, a medical supply company, and RFware, a student-faculty project to develop software that would, for example, allow first responders to talk to each other even if their radios are made by different companies. “These are good prospects,” Brenner says, explaining that because of a lack of completed construction drawings, “I haven’t asked anybody to sign up.”

The first phase of Innovation Park will start with a 50,000 square-foot general-purpose structure to be built along Edison Road, across from the southeast corner of campus. Eventually, the 10-acre park could include as many as five buildings enclosing more than 200,000 square feet of workspace. Brenner says plans call for construction to begin in 2010 on the second phase of the project, a 35,000 to 40,000 square-foot building that might be more specific to nanotechnology product development emerging from MIND research. That building is scheduled for completion in 2012.

Joining hands with the community
The projects have already changed the relationship between Notre Dame and the surrounding community. “There is a very sincere effort to see the future of how this University sees its role, that it is part and parcel with the community in terms of how we need to grow together,” says Brenner, who has nothing but praise for the cooperation he has received from city leaders such as South Bend Mayor Stephen J. Luecke. “It is a motive driven by, ‘We all live here, too.’”

Innovation Park is intended to be an incubator that will turn basic research into something that can work in the marketplace.

The idea is for businesses that outgrow their start-up phase to move to the “landing area,” Brenner’s term for South Bend’s Studebaker Corridor, a mixture of soon-to-be-cleared-out old factory buildings and previously cleared sites located just south of the downtown area.

Brenner says he is working closely with Luecke and others in an effort to assure that everyone understands the conditions needed to make the community the most attractive option for those companies when they move out of Innovation Park.

As big as Innovation Park will be for the community and Notre Dame, it is the MIND project that has everyone associated with it in awe.

“I don’t think you can use a superlative that’s large enough to describe what the potential impact of this” will be, says Patrick McMahon ’72, ’75M.S., director of the local economic pot-stirrer known as Project Future. “We have a seat at the biggest economic card game in the world.”

With the Semiconductor Research Corporation (SRC) led by IBM and other computer companies, the focus and priorities are clear, says Brenner. Similar university-guided research is already going on at the three other facilities, located at universities in California, Texas and New York.

All of the facilities are focused on finding the new device, the successor to the computer chip. Notre Dame is also and uniquely focused on the technology or “architectures” needed to allow the new device to work in a machine. It is one of the reasons the SRC’s Nanoelectronics Research Initiative (NRI) decided to create a center here, McMahon says.

The NRI believes that, by 2020, the end product of the semiconductor research “will totally dominate all of the logic devices in the world,” says McMahon. “Most folks who look at this see it as perhaps the greatest economic development opportunity that the Midwest has ever seen.” Even if only a small piece of the new business comes here, it should transform the region.

The new developments will come with a price tag for the South Bend area, which will have to step up to meet the challenge of new businesses and new people looking, among other things, for suitable housing and quality schools for their children.

McMahon believes local players will meet those challenges but concedes that if necessary actions aren’t taken to set the table, “then shame on all of us.”

Revving up South Bend
“We need a vibrant community,” Luecke agrees, acknowledging the need for the city to be attractive to the young professionals likely to be drawn here, adding that he is proud of the progress being made to improve local schools, which he calls a “critical component” of the changes being addressed.

The mayor says he plans to become more engaged with the South Bend Community School Corporation, which extends beyond city lines into Saint Joseph County. Part of his role, he adds, is helping his community understand both the challenges that need to be met and the opportunities that are coming.

Luecke figures the timetable laid out for Innovation Park will allow only three to five years to lay the groundwork for securing major investments in the community. That’s “not a lot of time to get ready,” he comments.

The mayor says the city has already experienced a strengthened relationship with the University because of the projects. He forecasts an expansion of growth, with new investment and new jobs. The improvements at Notre Dame, he says, will drive the improvements in the city needed to sustain the research.

Steps already taken to construct the 40-mile fiber-optic loop known as the MetroNet, clear land in the Studebaker Corridor and prepare for the Eddy Street Commons mixed-use development next door to Innovation Park will help South Bend make sure the projected commercialization actually happens here. “It’s kind of like the stars all aligned,” Luecke says.

The development of the MetroNet will be particularly crucial, the mayor believes, because it is connected to the transcontinental fiber-optic highway, an invaluable tool for businesses with a need to move lots of information fast. The effort the community must make is worth it because, he says, “You can’t get a bigger fish than this one.”

Funding for the project will come from a variety of sources, including the University, private donors, the city of South Bend, the state of Indiana and even the federal government, which recently approved a $776,376 start-up grant for Innovation Park.

According to Brenner, the various funding elements won’t get nailed down until fall. The city-state share is expected to be in the $2 million to $3 million range, not counting any private donations, with the University covering any shortfall, if there is one.

James Wensits, a former political writer for the South Bend Tribune, is the host of a political discussion show on WNIT public television.