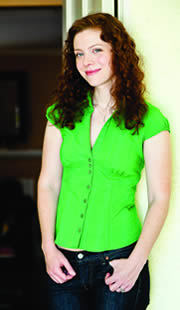 It’s difficult to envision the soft-spoken Heather Cocks ’99 as her generation’s standard-bearer of the Dorothy Parker zinger-hurling legacy. With a cascade of auburn curls accenting gentle blue eyes, her cherubic appearance gives no hint to her celebrated talent for making pithy (if sometimes cruel) online observations about celebrities and their wretched fashion choices.

In a career spanning little more than a decade, Cocks, who turns 34 next month, has, among other things, appeared on television, co-authored three books, written for the online magazine Television Without Pity, worked as a producer on two popular reality TV series — Tough Enough and America’s Next Top Model — and been a regular Fashion Week contributor to New York magazine.

But it was GoFugYourself.com, a wickedly funny blog chronicling celebrity fashion gaffes and more, that made Cocks and writing partner Jessica Morgan a definite must-read to some 3.5 million cyber-fashionistas a month.

“Fug” is defined by the pair as “a contraction of fantastically ugly.” Celebrities are the targets; civilians are spared, says Cocks. The reasoning behind this philosophy is that not everyone has the means to dress well. But those who do — such as millionaires and rock-stars — owe it to the rest of us to set a good example.

Critiquing, or “fugging” as they call it, the duo’s Go Fug Yourself website skewers everything from hideous awards-show fashions and unfortunate haircuts to botched plastic surgery and the Church of Scientology. Cocks’ and Morgan’s irreverent style reads like a marriage of the late Mr. Blackwell (of worst dressed list fame) and Saturday Night Live’s “Weekend Update.”

Commenting on a dress she mostly liked, Cocks wrote, “I wish I could snip off the train . . . it looks like she had an unfortunate static cling moment with a tablecloth.”

Another celeb’s look received this catcall: “This is not so much Hot Hollywood Style as it is President of the Lanyard-Braiding and Butter-Churning Club.”

Wry, satirical and replete with Hollywood-insider allusions, GFY quickly built a cult following. To maintain anonymity, and also for fun, Cocks and Morgan crafted tongue-in-cheek online personas for themselves, complete with photos that bear no small resemblance to Shannen Doherty (in her 90210 days) and Joan Collins (circa Dynasty).

As is often the case with cult phenomena, GFY has had its share of detractors. In the site’s infancy, a few nasty-grams directed at “The Fug Girls” suggested their anonymity was designed to mask the pair’s obvious lack of attractiveness, among other things. Rather than ignore the barbs (or worse yet, engage) Cocks and Morgan created “Intern George Clooney,” an imaginary Fug employee who mixes cocktails, answers readers’ questions and “responds to our hate mail.”

Reader interaction has been a big part of the growing popularity of the site in recent years. “Unfug it up” encourages readers to play fantasy stylists with a celebrity photo by suggesting improvements they would make to unflattering ensembles. Sometimes, the Fug Girls can’t decide if an outfit is good or bad, so they’ll put it to a reader vote in the column “Fug or Fab?”

GFY’s annual “March Madness” tournament, pitting 64 badly dressed celebrities against each other in a progressive elimination event paralleling NCAA action, has drawn a huge following. But it’s not all bad. In the regular feature “Well Played,” the Fug Girls actually give kudos to celebrities.

Magazines, newspapers and television networks worldwide, ranging from Time magazine and The Wall Street Journal to Entertainment Weekly and Bravo TV have sung GFY’s praises. Joan and Melissa Rivers have repeatedly included The Fug Girls in post-awards-show fashion wrap-ups, with Melissa commenting dryly during one telecast, “They’re meaner than we are!”

With the Internet having earned legitimacy as a source for news, the blog as a vehicle for commentary has claimed its rightful place alongside conventional print editorials and feature stories. “We were fortunate to have had a good idea at the right time and before anyone else had it,” Cocks says modestly.

When Cocks moved to Los Angeles in 2003, she contacted the L.A.-based Morgan, with whom she’d become acquainted when both wrote for what is now Television Without Pity. The two quickly became good friends. The Go Fug Yourself site, says Cocks, began one Sunday in late June 2004. “We didn’t set out to start a successful blog. It was born at the mall. We saw some movie posters, and everyone looked awful. We started riffing as a joke, to amuse ourselves and our friends. It started getting hits and attention. It wasn’t that we chose fashion as much as fashion chose us.”

The site officially debuted on July 1, 2004. “I think we got lucky,” echoes Jessica Morgan, Cocks’ equally humble partner. “We were sort of first on the scene in terms of fashion police on the Internet.”

As word spread, more and more fans logged on to commiserate with the now infamous “Fug Girls” as they aimed their rapier-style pen at calamitous couture wherever they found it.

Within two years, the enormous popularity of GoFugYourself.com helped Cocks and Morgan sell a proposal for The Fug Awards, a book spotlighting the best of the worst in celebrity fashion snafus and other egregious errors — such as tanning to excess and mangling for fashion certain body parts better left resting comfortably in a well-fitting bodice.

In the summer of 2006, the duo was at last flush enough, says Cocks, to “quit our day jobs and do this full time.”

That was the same year Cocks and her former co-worker, Kevin Mock, were married. The two met in early 2003 on the set of the reality series WWE Tough Enough. Several months later both were working on America’s Next Top Model, and they began dating. In June of 2009 the couple welcomed twin boys Dylan and Liam. “Now,” Cocks says with a laugh, “I am very busy, as opposed to just busy.”

The Fug Awards was published in 2008. The success of that book paved the way for Cocks and Morgan to enter the young adult genre with their first novel, Spoiled, which has just been released. The hits just keep on coming. A second YA novel, Messy, is due out next year.

Most recently, GoFugYourself.com has polished its appearance and expanded its reach into the social media milieu with a presence on both Twitter and Facebook. The proliferation of social media has had a dramatic impact, Cocks says. “It’s easier than ever to have a link go viral. Retweets, Facebook postings . . . people can pass that stuff along in a more public way, beyond just emailing a funny link to all their friends.”

The Fug Girls’ live fashion tweets were a not-to-be-missed accent to last year’s Olympic Games as well as the April wedding of Prince William and Catherine Middleton. (Those hats must have been asking for it.)

The old saw about luck being “when opportunity meets preparedness” couldn’t be more apropos than when applied to Heather Cocks’ career, as Cocks is nothing if not prepared for every project, according to those who know her. Agent Scott Hoffman describes her as possessing an “encyclopedic knowledge of pop culture,” enabling her to “work references into the blog with ease.” Ditto her writing partner, Morgan, who jokes that the two share “a mind meld” by way of explaining the seamlessness of the writing on GFY.

Karina Kogan, chief marketing officer of BUZZMEDIA, who shepherded the retooling of GFY last November, explains Cocks’ success from a business standpoint. “When anyone can be a content creator,” Kogan says “we take for granted how truly hard it is to write well and thus build a real editorial brand that people love and are loyal to. Heather is . . . funny, she’s consistent and her voice is one that millions of women relate to and love.”

For both Cocks and Morgan, that branding translates into a steady income stream from a host of Fortune 500 advertisers, a fact about which Cocks remains incredulous. “We still pinch ourselves and say, ‘What has happened in our lives that we’re in this place?’”

Time, Cocks observes, has been their friend. “In 2004, blogs were just coming into their own as a source of information and opinion. People at that time still wanted bloggers to hew to the clichéd image of a slovenly pajama-clad loser writing bitter, ill-informed screeds.” Now, she says, “People take blogs more seriously as an entity.”

She also notes that credibility builds upon itself. “When we launched in 2004, image providers wouldn’t license us their images — they seemed to think blogs were nothing but crazy fan sites. We always joke that we felt like Julia Roberts in Pretty Woman, when she showed up at the boutique with money to spend and they still wouldn’t give her the time of day.”

That all changed, she says, in the fall of 2005, when GFY was profiled on the front page of The Wall Street Journal. “Concurrently,” Cocks adds, “blogs took on a life of their own, and we got an image license with a major provider about a month later.” The license, with Getty Images, enables GFY, for a fee, to tap into a library of high quality, professional photos licensed for reproduction, and use them on the site.

“So much of my life has been a happy accident,” says Cocks, although she credits much of her success to her family and upbringing. The youngest of three daughters, she grew up in Texas and England. Her mother, Kathleen Reed Cocks, a 1966 Saint Mary’s graduate and vice-president of the auxiliary board at Sarasota Memorial Hospital was “a busy stay-at-home mom while she was raising us,” Cocks says. Her sister Julie is a Georgetown grad. Her other sister, Alison Cocks Hamilton, is a 1991 ND alum. Coincidentally, both Alison and Heather were Observer editors-in-chief during their time at Notre Dame.

But Cocks credits her late father, Alan Cocks, a geophysicist for Texaco, with having the greatest influence on her professional life. “The opportunities he gave our family, and his quick-witted, arch sense of humor, really shaped who I am so profoundly,” she says.

Sadly, her father died unexpectedly in April. While he won’t be here to witness her future successes, he lived to see his grandsons and to read his daughter’s first novel.

“I’m really grateful he got to see Spoiled,” she says wistfully, “because I’m proud of it and I’m proud of him and in a lot of ways those two things are connected.”

Liz Warren is a freelance writer and lifelong Irish fan. She lives with her husband and two dogs in Southern California.