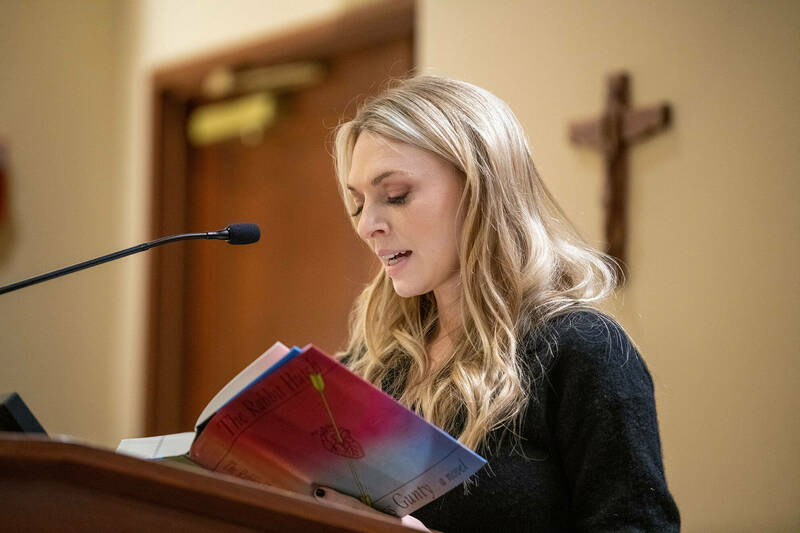 Tess Gunty ’15 has been voraciously reading and writing since childhood, finding the two tasks to be sources of joy and freedom.

“One life is not enough. I often feel that to be the case. Reading allows us to live multiple lives and writing does as well,” she told an enthusiastic audience during a November 30 visit to campus.

Gunty’s attention to words has paid off. Her debut novel, The Rabbit Hutch, last month won the National Book Award for fiction. The book also earned the inaugural Waterstones Debut Fiction Prize in Great Britain. And the rights have been purchased for a TV production.

The Rabbit Hutch, set over three days during a hot July, describes the lives of residents of a low-income apartment complex in the fictional Rust Belt city of Vacca Vale, Indiana. The community has many similarities to South Bend, including a vacant automotive factory that gutted the community economically when the company shut down.

During her Notre Dame visit, Gunty described the process that led to the novel, speaking to a standing-room only audience in the Eck Visitors Center. The conversation was moderated by Jason Kelly ’95, an associate editor at Notre Dame Magazine and interim director of the University’s Gallivan Program in Journalism, Ethics and Democracy.

The event was co-hosted by the Creative Writing program and Notre Dame Magazine.

Gunty is a former Notre Dame Magazine intern who has written for the magazine as both a student and a graduate. Her magazine assignments have included a profile of Patrick Denis “Murf” Murphy, the longtime beloved bartender at the Morris Inn and an interview with Notre Dame English professor Joyelle McSweeney.

Gunty described five years of writing the novel, including two years during graduate school while also working as a nanny and other jobs to cover her rent. She learned from the experience.

“It taught me to write what I wanted to write regardless of whether or not it would be published,” she said. “I felt very free to write what I urgently needed to say and to forget about how to pitch it or where it might fall in the market. And that was extremely liberating.”

She advises others who are considering pursuing a career in fiction writing not to assume that it will be a source of reliable income. “Put your investments elsewhere,” she said.

Selections from the campus conversation:

On the impact of her voracious reading and writing:

“As a child it was a way to feel completely free. I was a very anxious child. Now I’m a very anxious adult. . . .  It allowed me to both escape from and confront fears. But it also was a source of joy and freedom.

“I do think that it’s essential for certain people. I don’t know if we’ll ever know why certain people have to write, but I’m one of them.”

How she took inspiration from South Bend in writing the novel:

“The physical map of Vacca Vale was very inspired by South Bend. . . . I did imagine it being situated on a river. And obviously the car company in this book is modeled very closely on Studebaker automobiles.

“I was also drawn to write about a fictional city because I don’t want to offer some kind of definitive representation of South Bend, Indiana.”

On why the Midwest deserves more attention in fiction:

“When I was younger, I never had read anything that was set in a place like my town. When you never see your home reflected back to you, you assume that stories just don’t happen in the post-industrial Midwest or there’s no market for that. . . . I had been sort of brainwashed by the other things around me to think that my story and the lives of those around me were not worth the attention of the wider world.

“By the time I was in college, that started to become glaringly obvious as the reason to set something here. To insist that these lives, these kinds of more neglected places in America, are worthy of attention.”

On what she learned about writing at Notre Dame:

“I really credit my experiences at Notre Dame with emphasizing process over anything else. And emphasizing the importance of writing as an end in and of itself. I never assumed that I would be published.”

While Gunty was an undergraduate, her play Taxidermy won a Notre Dame Theater Now Award and her poetry collection, Radish Beds, won the Ernest Sandeen Award.

Her father, Mark Gunty ’89M.A., ’93PhD., is undergraduate analytics program director in Notre Dame’s Office of Strategic Planning and an assistant teaching professor of sociology. She has three older brothers: Benjamin ’08, Joshua ’10 and Nicholas ’12. Nicholas is an artist and musician who illustrated part of The Rabbit Hutch.

“As an adult, I’m increasingly mystified by the experience of writing,” Gunty said. “It does seem like this kind of alchemy and a process that resists definition.”

Gunty’s second novel, Honeydew, is scheduled for publication in 2023.