Some would say bartenders John Pelan and Harold Kelly had the best spot in the house that New Year’s Eve.

All night, off in an alcove behind their simple makeshift bar, Pelan and Kelly poured foaming pitchers of Budweiser and stirred up the occasional whiskey and ginger ale. A radio in the corner spouted updates from the Notre Dame-Alabama national championship game.

Beyond the alcove, men in suits with skinny ties and women with beehive hairstyles danced the waltz and fox trot to a live band.

It was the final night of 1973. About 200 gathered in the auditorium of Notre Dame Parish in New Hyde Park, Long Island, for the annual New Year’s Eve dance. Among the revelers were my grandfather, Patrick Coyne, and my grandmother, Dorothy.

Friends crowded around tables for 10; plastic cups quickly emptied. Men were making regular jaunts back to that little alcove to refill pitchers for their group.

Regular jaunts, of course, to the radio at the bar.

“Wives would be wondering, ‘What’s taking the hubby so long to get a pitcher of beer?’” my grandfather said. “But it was kind of exciting times, and you couldn’t walk away.”

As the time till midnight grew shorter, the beer runs grew longer. Every man wanted an excuse to slip into the little alcove and catch the latest on the game. And as the game moved into the fourth quarter, they lingered longer, crowding around that radio the way they might crowd around a campfire.

“Then it went down to 24-23 [Notre Dame], and Alabama had the ball now with only like a minute and 48 seconds left,” Papa said. “But that could take a lifetime to play.”

Within the parish, alliances to Our Lady’s university ran deep. Most members were first-generation Irish-Americans who had grown up together in immigrant neighborhoods of Brooklyn and Queens.

The majority had not gone to college. Those who did went on the G.I. Bill. To my grandfather’s knowledge, none had gone to Notre Dame.

But since childhood they had idolized the Irish. 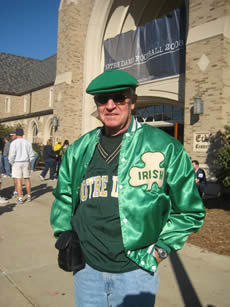 My grandfather was raised in Prospect Heights, Brooklyn, in the 1930s and ’40s, an area teeming with poor Irish, Italian and German immigrants, called the “Ninth Ward” by Brooklynites. His father, a longshoreman, worked hard but sometimes drank even harder.

Despite the crowded apartment, tattered clothes and meager, unstable income, Papa looks back at those years fondly.

Children in the tenement had few possessions but vast, sprawling imaginations. For the tenement kids, the streets, the parks, the abandoned lots and the stoops were their kingdom.

Papa remembers waiting on the street corner for the 8 p.m. “bulldog edition” of the Daily News — only 2 cents then — to arrive. He’d flip to the sports section to read about the “Fighting Irish,” the only college football team he and his buddies took interest in.

On Saturdays, Papa and his friends might head to the theater to see a double feature for 25 cents. A newsreel of current events always played between the two films.

“The [newsreel] would have a less-than-a-minute snippet of the Notre Dame game,” Papa said. “That’s all we waited for, that was the whole thing for us.”

The boys took their love for the Irish out of the theaters and into the streets. But since the movies were in black and white, kids from Papa’s neighborhood never knew what colors Notre Dame really wore.

“When we played organized football we’d call ourselves the ‘Fighting Irish’ and we’d get green and gold uniforms,” Papa said. “When they’d line up behind the center, our quarterback, Marty Dougherty, would say something like ‘down big green and gold!’ Meanwhile, we were these scrawny-looking skinny Irish kids.”

Papa and his friends were just a few of Notre Dame’s poor but passionate “sidewalk alumni.”
Sports journalist Jimmy Cannon also grew up in an immigrant neighborhood of New York City. In a 1967 column for the Daily News, he writes about the pride that bonded the Irish slums of New York to an affluent university over 700 miles away.

“Football was important. But Notre Dame was a cherished symbol,” he writes. “In our neighborhood, where a good education meant graduating from grammar school, the Notre Dame football players were the perfection of our kind.”

“On our mean streets, no band played and a pennant never waved when Notre Dame won,” Cannon writes. “But we were as much a part of that distant university on the prairie as though we had a diploma to prove it.”

As a child, my grandfather barely crossed the boundaries of New York City. So for all he and his buddies knew, South Bend, Indiana, could have been a landlocked Emerald Isle.

Perhaps Notre Dame’s remoteness made it even more captivating.

As the boys of Brooklyn built their careers and rose into the middle class, they moved east into modest homes on Long Island but have remained close friends for over 70 years.

Hugh Mullin, one of those friends, broke the good news about the championship outcome that New Year’s Eve of 1973. He had disappeared back with John Pelan and Harold Kelly — much to his wife Mary’s chagrin — and wasn’t seen again until around 11 p.m.

Even the previously irritated wives joined in on the excitement. The band played The Victory March.

“The revelers went crazy with joy,” Papa said. “The real party had begun in earnest.”

When 1974 arrived at midnight, the bittersweet words of “Auld Lang Syne” soared through the auditorium and couples swayed in beer-fogged bliss.

“But needless to say, the ringing in of the New Year was a bit anticlimactic,” Papa said. “By the time 12 o’clock rolled around, we had already done all our [real] celebrating.”

Thirty-nine years will have passed when Notre Dame faces Alabama again in another high-profile matchup for the national title. Since then, Papa has had a son and a granddaughter graduate from Notre Dame. He has visited campus countless times with his buddies from Brooklyn, watched it blossom beyond the original quads. He’s discovered South Bend is a second home for the Irish but no replica of the Emerald Isle.

For my grandfather, he certainly won’t be in a church gymnasium this time around with the Crimson Tide.

“Before, I could go to the dance,” he said, laughing at the absurdity of listening to the game on a bar radio. “Now, I couldn’t go to a dance. No way.”

Sara Felsenstein works in television in New York City and keeps a writing and photography blog, sketchingastory.com. Contact her at sfelsens@gmail.com.