If television writers can be typecast, J.J. Philbin ’96 has avoided that fate. From dramas like Heroes to comedies such as New Girl, she’s written for a wide range of successful shows.

She started at Saturday Night Live in 1996, landing the coveted gig of writer-researcher.

“That was the title,” Philbin says, laughing. “But what it mostly involved for me was getting lunch orders. Then getting lunch. Then it might repeat at dinner time.” 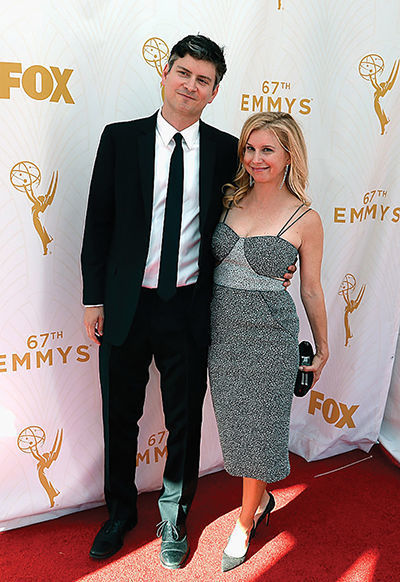 Philbin and her husband Michael Schur on the red carpet. Photo by Kevork Djansezian/Getty Images for TheWrap

She would eventually rise to the position of staff writer, a short-lived stint that she was sorry to see end in 2000, but she remembers it today as an invaluable experience and an important addition to her résumé.

“You’re down a bit at the time, but you come to see how much you learned,” she says. “And just the chance to be a part of it. It’s a rite of passage for so many — I realized that.”

After moving to Los Angeles, Philbin spent a few years working on shows that came and went quickly. Remember Dead Like Me? Then she landed a spot on cult classic The O.C. halfway through its first season in 2003 and stayed until its cancellation in 2007.

“It’s a teen soap and such a departure from what I was doing, but the show was going bananas,” she says. “Working for Josh Schwartz and Stephanie Savage, I learned a whole new approach to writing. It was drama, though it was also comedic. . . . You wanted to have enough plot to get you through an hour but allowing you to also feel like you were hanging out in Newport with these people.”

One of her favorite episodes was “The French Connection” in the show’s final season. Lead character Ryan, played by Ben McKenzie, grows insecure in the presence of a suave Frenchman played by Henri Lubatti.

“We knew the show was going to be canceled,” Philbin says, “and it just left us to have fun because we knew we wouldn’t have to deal with all these things we were creating when the next season rolled around.”

After The O.C., Philbin landed on another cult favorite, Heroes — a story of ordinary people with superpowers — for its second season.

“I never was involved in science fiction before,” she says. “I was swept up when I looked at the first season and was excited for one more challenge.”

Around 2010, Philbin found her way to what’s arguably her most notable stint. With a three-year-old son and a one-year-old daughter at home, she had told her agent that after working on Heroes she’d focus on her own pilot scripts, rather than trying to navigate the unpredictability of writing for shows in production.

“But then I wound up coming across the script for New Girl. It was so charming and different and I loved the voice of the writer, Liz Meriwether,” Philbin says. “I went in for a meeting and everything went out the window. I felt, this is a show that just doesn’t come around every day.”

“It never got into a pattern of, ‘this is what works and we’ll just make more of this,’” she says. “Instead, the characters got older and we had conversations about, ‘What is the show now?’ It keeps changing. It’s not ‘We cracked the code.’ It’s reevaluating.”

After being away for a few years, Philbin returned to help wrap up New Girl, which has an eight-episode final season in the works. What’s next? Probably a focus on getting her own show on the air.

“It’s a goal after all these years of being in a room,” she says.

Whatever type of program the versatile Philbin works on, she shares a philosophy with her husband, Michael Schur, who created The Good Place and Parks and Recreation.

“We ask, ‘Is this something?’” she says. “Your writing can be an interesting idea or premise, but does it really have legs?”

Wherever her career leads her, Philbin appreciates the opportunities her profession offers. As a day-to-day experience, it’s hard to beat.

“To entertain people and spend your workday just talking with people and laughing,” Philbin says, “that’s a dream job.”

Eric Butterman has profiled Regis Philbin ’53, Margaret Ruffing Morris ’98 and others for this magazine. Contact him at ericbutterman@yahoo.com.