Recently my father, Vincent A. Hartigan, Notre Dame class of 1962, was diagnosed with advanced esophageal cancer. Two weeks after his diagnosis, I flew to Chicago. We drove to Notre Dame one weekend to visit his good friend and the priest who baptized me, Father Joe Carey, CSC, ’62, and spent time at the Grotto and walking around campus, becoming reacquainted with its beauty and tranquility. When I returned home, this is what I wrote.

It’s What We Do 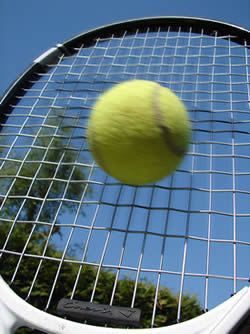 I rollerblade to the courts from my dorm.
“Nice wheels.”
We were in Mobile,
It was Parents’ Weekend.
“What?”
“Wheels — legs. South’s made you slow.”
“Oh.”
We play a couple sets in the soup
they call air
in Alabama.
He always wins.

When I surprise him in Chicago,
after the diagnosis,
and the not sleeping (me),
and the not sleeping (him),
he’s written (in his head)
his eulogy;
knows who he wants as pallbearers,
Klett, Fitzpatrick, Carey, O’Neill, his brothers,
Hartigans.
No kids are to eulogize him,
he says,
that’s a job for Father Jim.

After endless searches on the Internet,
finding only one good story
about the guy who made it,
Erik told me to just go.
We bought a ticket, I didn’t tell them we were coming.
I take Pudge,
we decide to stay for a month.
He opens the door
and sees his daughter and granddaughter,
and I have my racket.
“Good, we’ll play Sunday.”
Some mixer at a club on the North Side,
and it was us again.
Doubles partners.
And we are winning.
Then he misses a shot
and says, “I would’ve gotten that but, you know, I have cancer.”
We laugh.

On the last Sunday we’re in town
we play again.
The port is already implanted in his chest wall,
ready for five weeks of continuous chemo
and daily radiation,
Monday through Friday.
And that first Monday,
four hours of chemo.
I take Pudge to Northwestern,
but she is not welcome in the chemo café.
So she stays in the lobby with her Kiki.
I follow the map that Mom tells me to travel.
Down the hall,
past his oncologist’s office,
Dr. Stephanie Williams.
She is not at her desk.
The room at the end of the hall,
big and miserable.
“Walk around to your right,
You’ll see him.”

We’re on the 21st floor,
and people,
sick people,
are hooked up to IV bags.
Their chairs face inward,
so they are looking at all the other sick people,
not at Lake Michigan,
which is behind them,
and brilliant
and hopeful.
Guess it makes it easier for the nurses
to check vitals.
But the patients,
especially the one who is my age,
bald,
his father sitting next to him.

My eyes water,
they always water.
And I see him.
“I won’t be much company,” he says, apologizing for his illness.
I sit down and pretend to yawn,
masking my tears.
He’s been dosed with Benadryl to make him sleep.
Who wants to be cognizant anyway?
And the man next to him,
early 80s,
a blanket to his neck.
His wife brings him a sandwich.
They make small talk
with my dad.
“Leukemia,”
the man says.
“Esophogeal,”
Dad says.
And I go get him some saltines
so he won’t see my tears.

There is a picture stuck in my journal,
the journal someone gave me for my 35th birthday,
the journal that might be the start of a memoir.
Tucked in the pocket in the back —
it is a picture of us,
on a sloppily shoveled path from our house to the car.
We’re off to play tennis,
wearing shorts (him), and a skirt (me),
and our CB ski jackets.
It must be February.
I must be 9.
My legs are long and thin;
nice wheels.
We’re off to play tennis.
It’s what we do.

And so when we play that last Sunday
before the chemo,
no one knows our story,
but we tell them that night.
I’m in from Boston,
he starts treatment tomorrow.
At first his oncologist tells him he won’t be able to play with the port,
but his surgeon tells him because he’s a lefty,
he should go for it.
And because he’s just found out that after the five weeks of chemo
and simultaneous radiation
and surgery,
after all of that
there will be a bonus round:
12 weeks of chemo.
So plans for August tennis
blow away.
But Sunday night
we play the best tennis of our lives.

Amy van Aarem is a freelance writer outside of Boston; her email is amyvanaarem@gmail.com.
Tennis photo: