“They may be gone, but I’m no less a woman,” she said, chuckling, as I adjusted her hospital gown.

The woman was a double-mastectomy patient, plump and elderly, whose manifold wrinkles and deep laugh lines betrayed her age and her good humor. Her hair was a mass of short coils, dyed black, and her lips formed a bright, fuchsia smile that contrasted starkly with the rest of her face, which was the color and texture of a hazelnut. Where her breasts should have been, there were two small mounds of flesh, each transversed by a straight line extending from the underarm toward the heart like a pale path across a smooth, brown hill. 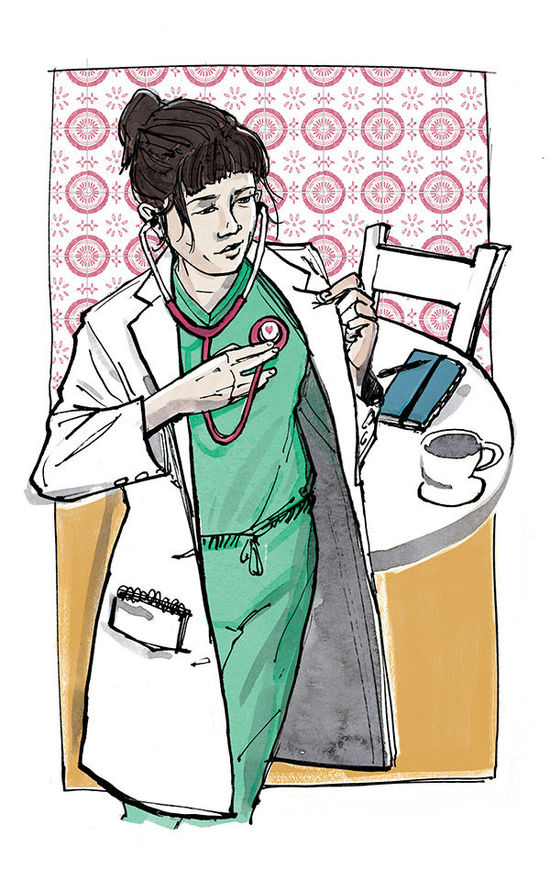 It was hospital policy to monitor mastectomy patients for at least five years after surgery, and today’s visit marked this woman’s sixth year. She had become unbothered by the process of disrobing and having her body squeezed and prodded –– so much so that she made easy conversation with the staff in the room, and made no objection to the doctor telling me to do the checkup in his place, despite my glaringly obvious status as a young foreigner.

My tongue stumbled as I explained to her in halting Spanish that I was an undergraduate student from the United States shadowing doctors at this hospital, and that I lacked the formal training for a procedure like this one. She nodded in understanding, an amused matronly expression on her face, then took my hand, placed it over one of her scars and moved it in a circular, kneading motion. She explained that the motion would allow me to feel for differences in tissue texture. Any hard lumps were signs of a potential tumor. Today everything was soft, which meant she was healthy. Shaken by the role reversal that had taken place, I thanked her for teaching me. “My pleasure, doctor. How good it is that you are learning and practicing,” she replied.

Six weeks earlier, while I was studying for my organic chemistry final exam, I had sworn that I would use my fall semester abroad to decide whether I would continue studying medicine. My abysmal grades in the subject had put me back a semester, landing me back on campus for the summer. Because it was the only course I was taking, I started out with renewed vigor, but motivation quickly turned into doubt, and doubt into bitterness, as I realized that my problem with the subject was not, as I had hoped, the amount of time I was dedicating to it, but rather my inability to understand and retain the concepts.

During the last week of class in July, I studied in a desperate effort to ensure that the tuition that my parents had paid would not go to waste. I lost sleep, not because I had too much to do, but because of my anguish that I seemed doomed to fail no matter what I did. How could I continue down this path if I was cracking under pressure this early? How could I even get into medical school? Why had I spent so much money I couldn’t afford if I was going to fail? Was this trouble worth anything? Was I worth anything?

Four days after the exam, I arrived in Puebla, Mexico. I was one of 19 students in my program, all of us studying medicine or health-related subjects. Most of us planned to attend medical school in the near future. In the U.S., this meant we were pre-medicine students, or “pre-meds.” We soon learned that no such classification exists in Mexico, where medical students receive their education as undergraduates and are called “doctor,” the same title used for licensed professionals. Now that title applied to us.

This was odd, given that the hospital rotation program was designed as experiential learning. It was not supposed to be doctorhood. It was supposed to build our resumes and advance us along the path that would lead to doctorhood.

At first it felt funny to have this coveted and unearned title conferred upon us. After some time, most of my peers grew accustomed to it. I never did. Every time a nurse or a senior doctor called me “doctor,” the word gnawed at my sense of self.

Doctor, come look at this screen.

Doctor, have you done this procedure before?

Doctor, why don’t you perform this examination?

It felt even worse when a smiling patient, with eyes full of sincerity, would address me.

Doctor, are my results all right?

My goodness doctor, you’re so young.

With each instance I became more acutely aware of how constricting my starched white lab coat, a half-size too small, felt above my scrubs. In an effort to stop feeling like a fraud, I paid close attention and took copious notes, trying to retain as much medical knowledge as I could each day. However, as the days passed, I found that what I enjoyed and remembered most were not the medical techniques, but the personal stories of the people I met. Everyone seemed comfortable talking around me, especially once they realized that my Spanish was quite functional — despite my reticence while speaking it.

As I grew more accustomed to the hospital environment, I found it was easy to befriend the staff and my fellow students. They would often respond enthusiastically, and at length, to just about everything I asked them, whether it was about the daily eruption status of Popocatépetl, one of the three major volcanoes surrounding the city, or why they had decided on a career in medicine. I amassed a trove of personal information –– the adventures of one doctor’s toddler son, the enthusiasm that another’s teenage daughter had for Korean pop music, the dating history of one of the medical students, the favorite torta filling of another.

These were the details through which I learned Mexican culture, and I was able to remember them effortlessly. The conversations between patient cases cultivated my sense of belonging in the hospital — not as a doctor, or even as a pre-med, but as a foreign traveler who wanted to learn about a country through the people who lived and worked there.

Two months later, I was moved into a different rotation cycle with no other students and scant supervision from the doctor in charge of the department. While most students ambitious in their pre-med dreams would have sought out a different department to further their medical education, I did not. By this point, medicine had since ceased to be the factor keeping me at the hospital. And with that realization, my six-year desire to be a doctor started to wane — as did my attendance at the hospital.

Instead, I began to frequent the second floor of Mi Viejo Café during my rotation hours, sitting at the same table by the window, in the same seat facing the staircase. Sometimes I did homework, but mostly I wrote or drew. Exploring my hobbies, I reasoned, was a better use of time than working at a rotation I felt no motivation to explore. By my third visit, the waiter remembered my seat and my order and brought me my coffee instead of the menu.

It was during these bright morning hours, surrounded by wafts of coffee and the same sequence of jazzified pop music that the café played like clockwork each day, that I finally accepted I was not, and could not be, a doctor. But as soon as this realization set in, my ebullience at my freedom was tempered by the uncertainty that came with it. Gone was all the familiarity and comfort of a predictable future. I had only the vaguest ideas about what I could be — and a single, resoundingly clear idea about what I was not. That was troubling: I felt I now had less than what I had started with.

I embraced the vacancy in time. Some things, like cancerous tumors and toxic dreams, are meant to be cut out, even at steep costs — things such as comfort, pride and certainty. We must leave the worst of ourselves behind for the sake of saving the whole of ourselves. The key is remembering that we are not lesser for that choice.

Alex Park is a rising senior majoring in sociology and a recent addition to the Gallivan Program in Journalism, Ethics, and Democracy. She is interning this summer at the Houston Chronicle.